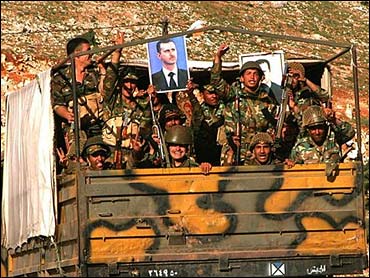 The White House on Friday accused Syria of failing to live up to the terms of a United Nations resolution that it withdraw all its forces from Lebanon and accused Damascus of meddling in Lebanese elections.

Syria has said that all of its military and intelligence officials left Lebanon by April 26.

But McClellan disputed that claim.

"We have called on the United Nations to send verification teams back to Lebanon," McClellan said.

U.N. Secretary-General Kofi Annan has said he was considering sending a U.N. team back to Lebanon to check reports that Syrian intelligence officials may still be operating in the country.

"It's important for the international community to send a clear message to Syria that it must stop meddling in Lebanon," McClellan said. "I think the world is watching Lebanon closely."

He said that Syria's long presence had established a lingering "environment of intimidation."

"We want to see those elections that are occurring now to proceed in a free and fair manner without any outside interference or intimidation," McClellan said.

"Syria has not fully complied with the Security Council resolution and the demands of the international community" to withdraw all its forces from Lebanon, the spokesman added.

"Syria needs to comply fully with the United Nations Security Council Resolution 1559, and that means getting all their intelligence operatives out of Lebanon," McClellan said.