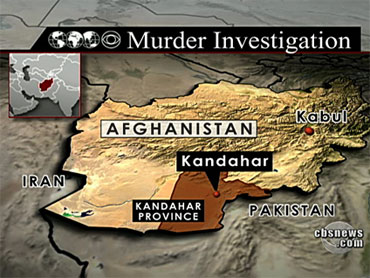 Gen. Stanley McChrystal, the top commander in Afghanistan, has gone to extraordinary lengths to reduce the accidental killing of Afghan civilians, but now there is a case in which American soldiers are accused of murder.

The alleged killings happened near Kandahar in southern Afghanistan, where U.S. troops are gearing up for the most important operation of the war, CBS News national security correspondent David Martin reports.

Members of a squad of about 10 American soldiers are under investigation for murdering at least three local villagers who had angered them. According to the allegations, this is not a case of civilians being mistaken for Taliban fighters and not a one-time moment of rage.

Instead, it happened on different occasions over the past several months. The squad leader, a sergeant, is said to have done the shooting.

In addition, some members of the squad are accused of smoking hash.

Charges could be brought against the soldiers as early as next week.