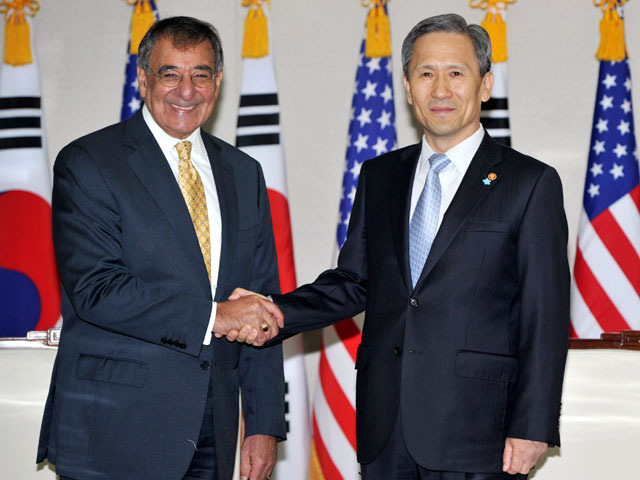 SEOUL, South Korea - The U.S. and South Korean defense chiefs declared Friday that any North Korean aggression "is not to be tolerated," following two deadly incidents last year, and pledged to jointly develop more effective means of responding to future provocations by the North.

U.S. Defense Secretary Leon Panetta and his South Korean counterpart, Kim Kwan-jin, told a news conference at the Ministry of Defense that they also decided to increase "combined watch activities" in advance of an international summit planned for Seoul next spring. They did not elaborate, but the statement appeared to mean they would boost intelligence gathering and surveillance.

The two sides issued a joint statement reaffirming their solidarity and vigilance against a potential attack by the North.

"The minister and the secretary urged North Korea to abandon all nuclear weapons and existing nuclear programs," they said, and urged the North to "demonstrate its genuine will" to give up its nuclear ambitions through "concrete actions."

U.S. and North Korean diplomats held talks this week in Geneva to explore a possible resumption of international negotiations over the North's nuclear program, but despite reports of modest progress there was no word on when additional discussions might be held.

Earlier, Panetta expressed doubt that diplomacy will persuade North Korea to surrender its nuclear weapons and he raised the prospect of stalemate leading to "escalation and confrontation."

After daylong meetings with South Korea's government leaders, Panetta told reporters he was concerned by North Korea's pattern of deliberately shifting from periods of modest accommodation with the West to episodes of violent aggression, perhaps with no real intention of giving up its nuclear ambitions.

Tensions remain high on the Korean peninsula, largely stemming from the North's deadly bombardment of a front-line South Korean island that killed four people in November. The South also holds the North culpable for the deaths of 46 sailors on a South Korean warship that sank in March last year.

Asked whether he thinks a renewed effort by the Obama administration to explore a possible new round of international negotiations with North Korea will work, Panetta was blunt.

"We're not sure where those talks are headed at this point," he said, referring to the Geneva discussions North Korean diplomats,, where there was no apparent breakthrough.

"For that reason, I guess the word `skepticism' would be in order," he said.

The Pentagon chief said he believes, nonetheless, that efforts at a diplomatic solution must go on.

"On the one hand, we have to engage," he said. "We have to try to seek the hope that ultimately they'll do the right thing and join the international family of nations. ... But I think we always have to be cautious that at the same time, they're going to continue to develop their nuclear capability."

In the same session with reporters, the commander of U.S. Forces Korea, Army Gen. J.D. Thurman, indicated that he suspects the North Koreans are determined to keep up the expansion of their nuclear capabilities.

"Based on what I have observed, they show a willingness to continue to develop and test capabilities that can be associated with their nuclear program," Thurman said. "This is something we've got to remain vigilant on."

Separately, the State Department's top Asia policy official, Kurt Campbell, was in the South Korean capital on Thursday to brief officials on the Geneva talks.

North Korea's foreign ministry issued a statement saying the talks "helped deepen each other's understanding." The statement said both sides agreed to further talks on whether to resume the international discussions involving North and South Korea, Japan, China, Russia and the United States.

Panetta said China, a longtime North Korean ally, "can do more" to push North Korea to give up its nuclear program.

"There are moments when we think that they are urging North Korea to engage, but frankly I think China can do more to try to get North Korea to do the right thing," he added.

"I know that sometimes they make that effort and sometimes North Korea doesn't pay attention."

Panetta's first visit to South Korea as defense secretary is part of a broader U.S. effort to shore up South Korea's confidence in a military alliance that has endured for six decades.

Panetta met with the South Korean defense and foreign affairs chiefs and paid a courtesy call on President Lee Myung-bak.

Panetta has called the North "reckless" and a "serious threat" to peace on the Korean peninsula, which exploded in war in 1950 and drew the U.S. and other nations into a three-year conflict against the North and China.

Panetta was asked by reporters what he thinks can be done to break a cycle of North Korean behavior in which it alternately makes gestures of accommodation to the West, followed by provocations.

"The cycle ultimately has to be broken," he said. "There is either going to be an accommodation where they decide to make the right decisions with regards to their future and join the international family of nations ... or, if they continue these provocations, then obviously that's going to lead to the possibility of escalation and confrontation."

Among the maneuverings that influence U.S. thinking about the security threat posed by North Korea is the process now under way in which the supreme leader, Kim Jong Il, is expected to turn over the reins of power to his son, Kim Jong Un, a newly minted four-star general believed in his late 20s. He would be the third generation leader in a family dynasty that has ruled since Kim Il Sung founded the Democratic People's Republic of Korea in 1948.

U.S. officials are unsure what timeline has been set for the leadership succession. But two senior American military officers in Seoul said it appears the process has slowed, possibly because Kim Jong Il's health problems seem to have eased. The officials spoke to a group of reporters on condition of anonymity because of the sensitivity of the topic.

U.S. and South Korean officials believe Kim Jong Il had a stroke in August 2008 that kept him out of the public eye for months.

The officials, who are privy to the latest intelligence assessments, said North Korea's recently more accommodating approach to the U.S. is judged to be only a tactical maneuver likely to be followed next year by demands for concessions. That would follow a decades-long pattern in which unmet concessions lead to a period of provocations from North Korea, such as the 2006 nuclear test that came just months after the North cut off nuclear disarmament talks.

The U.S. officials declined to say whether they believe the North can be persuaded to give up its nuclear weapons, but their analysis of the North's basic approach to the West strongly suggested that they do not expect it to change course.