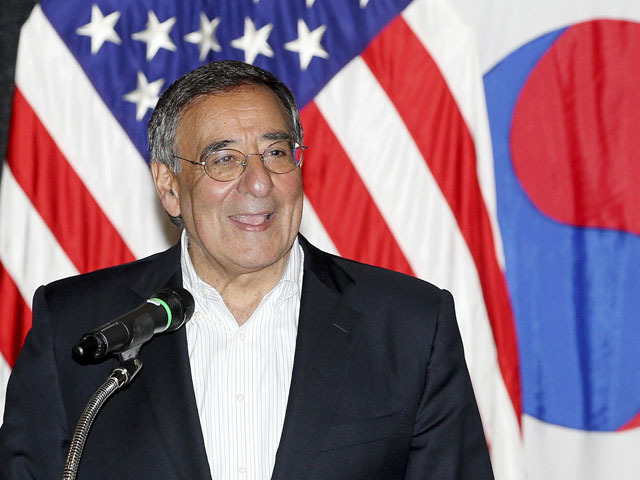 SEOUL, South Korea - U.S. Defense Secretary Leon Panetta on Wednesday called North Korea a "serious threat" and told U.S. troops that the Pentagon will strengthen its presence in this region to guard against North Korean provocations.

Panetta met with top U.S. commanders here. In an opinion piece published by a Korean newspaper before he arrived in Seoul, he wrote that the U.S. will continue to cooperate with South Korea as a bulwark against potential North Korean aggression, "and stand prepared to defeat" the North if it should attack.

"It is important to send this signal because North Korea remains a serious threat," he wrote.

The U.S. has 28,500 troops stationed here — holdovers from the Korean War that ended in 1953 with a truce but no peace treaty.

Panetta's characterization of the North as a serious threat was a bit less forceful than earlier in the week, when he called the North Koreans "reckless." That was before U.S. and North Korean diplomats completed talks in Geneva about resuming full-blown negotiations over the future of North Korea's nuclear program. Both sides said they had narrowed their differences, but no date was set for follow-up talks.

Throughout Panetta's Asia tour, which began Saturday in Indonesia and included a stop in Tokyo, he has repeated one central message: Coming budget cuts will not compel the U.S. to pull back its military presence in the Asia-Pacific region.

He sounded the same theme in remarks to sailors on board the USS Blue Ridge at Yokosuka naval base in Japan on Wednesday morning and upon his arrival in Seoul several hours later. He addressed about 300 U.S. and South Korean troops at the Yongsan army post in Seoul after meeting with Army Gen. J.D. Thurman, the commander of U.S. Forces Korea.

The U.S. will remain a Pacific power, Panetta said, and "isn't going anywhere."

In his opinion piece, Panetta wrote that the U.S. and South Korea are advancing their capabilities to deal with North Korean missile threats, boosting intelligence sharing and "strengthening" planning to counter North Korean provocations.

Panetta on Friday will attend an annual U.S.-South Korean review of alliance priorities, policies and structure. That will be preceded Thursday by a meeting of top military leaders, including the new chairman of the U.S. Joint Chiefs of Staff, Army Gen. Martin Dempsey.