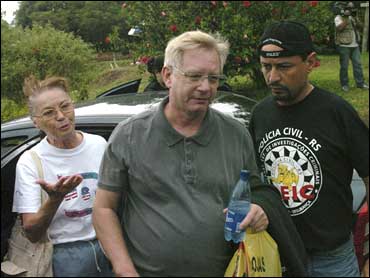 Police were investigating whether the group, called New Face, was being used as a front to attract youngsters, police inspector Juliano Ferreira said by telephone.

Police said they arrested Frederick Calvin Louderback, 63, and his girlfriend Barbara Anner, 54. Louderback is suspected of sexually abusing at least 10 boys between the ages of 6 and 14, all from poor neighborhoods near the colony, police said. Anner was accused of luring the boys with promises of gifts, food and trips.

The couple has denied all accusations, Ferreira said, adding that they will be interrogated again on Thursday.

Authorities were also investigating the possibility the organization ran by the couple was used to send children to the United States, Ferreira said.

Two Brazilians suspected of helping them also were arrested at the Colina do Sol nudist colony in the state of Rio Grande do Sul. Police identified one of the Brazilians as Andre Herdy, who is the president of the Brazilian Nudism Federation, according to the federation's Web site.

The Associated Press was unable to locate the couple's Brazilian attorneys on Wednesday.

An article on a tourism Web site signed by a Barbara Anner promoted Colina do Sol as a nudist destination and identified one colony member as retired U.S. fighter pilot named Fritz Louderback from southern California, though police said the couple was from Virginia.

The article said Anner was past president of a nudist resort in Southern California. The accuracy of the article's contents could not be independently confirmed.

The FBI helped Brazilian detectives, who seized laptops, photographs, a camera and DVDs. Ferreira said police were still analyzing them for evidence.

The Zero Hora newspaper said photos seized by police included one showing three naked boys on the couple's bed. There were no photos of sexual abuse, however.

Most of the roughly 100 families living in the colony are Brazilians, Ferreira said.

The Colina do Sol colony released a statement Wednesday saying the four members arrested "did not participate actively" in the colony and that their actions were "restricted to their homes."

Police kept track of the U.S. couple by sending undercover officers into the colony, authorities said.