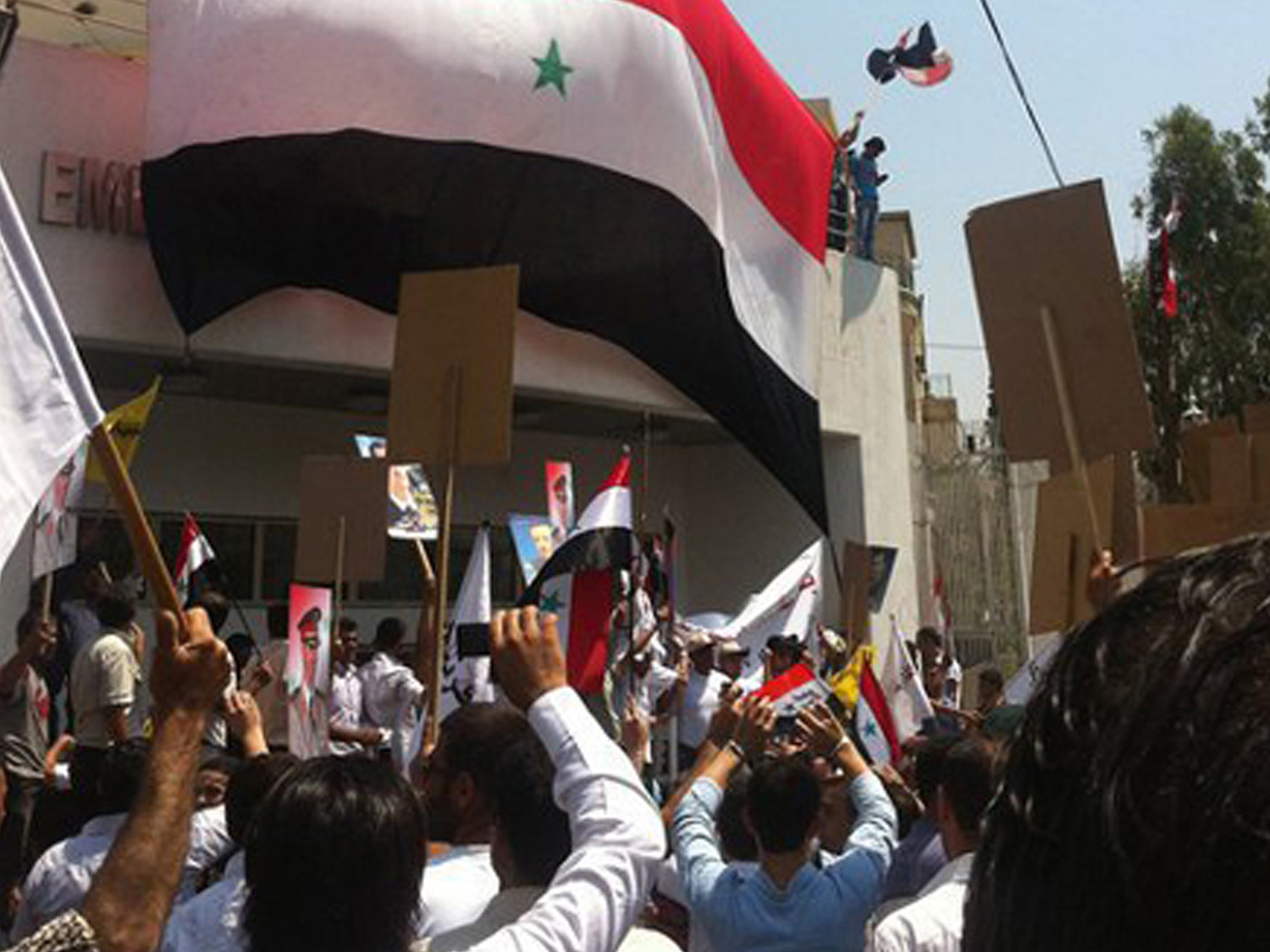 WASHINGTON — Secretary of State Hillary Rodham Clinton said Monday that Syrian President Bashar Assad has "lost legitimacy" as a leader interested in reform as the United States formally protested an attack on the U.S. Embassy and the American ambassador's residence in Damascus.

Clinton's comments fell short of demanding that Assad leave power but were some of the strongest public criticism yet by a senior U.S. official and demonstrated Washington's anger not only at the embassy attack but the Assad regime's continuing crackdown on opponents.

"From our perspective, he has lost legitimacy," Clinton told reporters at the State Department in a joint news conference with European Union foreign policy chief Catherine Ashton. "He has failed to deliver on promises he has made, he has sought and accepted aid from the Iranians as to how to repress his own people."

Diplomacy in the age of Facebook
The world's enduring dictators: Bashar Assad, Syria
Complete coverage: Anger in the Arab World

Clinton said there was a "laundry list of actions" that the Assad regime should be held accountable for. And she condemned the attacks on the U.S. and French embassies while demanding that Syria uphold its international treaty obligations to protect foreign diplomatic missions.

Earlier, the department summoned a senior Syrian diplomat to register the U.S. complaints in person and said it would seek compensation for damage caused when a mob of what it described as about 300 "thugs" breached the wall of the embassy compound before being dispersed by U.S. Marine guards.

Clinton cautioned Assad and his supporters that there was no truth to suggestions by some that the U.S. wanted to see the current regime stay in power for stabilities' sake.

"President Assad is not indispensible and we have absolutely nothing invested in him remaining in power," she said.

State Department spokeswoman Victoria Nuland said it appeared a government-controlled television statement had instigated the violence, and Clinton warned Assad that he could not distract the international community from its brutal crackdown on protesters demanding reforms.

"By either allowing or inciting this kind of behavior by these mobs against American and French diplomats and their property, they are clearly trying to deflect attention from their crackdown internally and to move the world's view away from what they are doing," Clinton said. "It just doesn't work."

Nuland called the embassy attacks "absolutely outrageous." She said the mob had not breached the chancery building but had gotten onto its roof, spray painted graffiti and broken windows and some security cameras. In addition, she said protesters lobbed fruits and vegetables at the compound.

She said that Syrian security forces who are supposed to guard the mission were slow to respond to the attack. There were no injuries reported to embassy personnel, who are all accounted for, officials said.

After the crowd at the embassy was dispersed, the protesters moved to the residence of U.S. Ambassador Robert Ford and attacked it, causing unspecified damage, Nuland said.

Witnesses said the protesters smashed windows at the embassy and raised a Syrian flag on the compound. They also wrote anti-US graffiti referring to the U.S. ambassador as a "dog," the witnesses said. The protests were over visits by the U.S. and French ambassadors last week to the opposition stronghold of Hama in central Syria.

On Sunday, the State Department complained that pro-government demonstrators threw tomatoes, eggs and rocks at the embassy over the weekend to protest Ford's visit to Hama. There were no reports of injuries, but a senior department official said two embassy employees were pelted with food during the 31-hour demonstration.

Ford on Thursday visited Hama, where he was greeted by friendly crowds who put flowers on his windshield and olive branches on his car, chanting, "Down with the regime!" The State Department said Ford made the trip to express support for the right of Syrian people to demonstrate peacefully.

The Syrian government denounced Ford's visit, saying the unauthorized trip was proof that Washington was inciting violence in the Arab nation. The main headline of state-run daily Al-Thawra read, "Ford in Hama and Syrians are angry."

Last week, the Syria's ambassador to the U.S. was summoned to the State Department to hear concerns about reports of Syrian diplomats conducting video and photographic surveillance of people participating in protests in the United States. Authorities may have retaliated against some demonstrators' relatives in Syria, the department said in a statement on Friday.

The Obama administration has criticized Assad's government for its violent crackdown on peaceful protests against his 11-year rule. Clashes between protesters and Assad's supporters have resulted in the deaths of 1,600, in addition to 350 members of the security forces.

But the White House has so far refrained from calling for an end to the Assad family's four decades of rule, wary of pressing too hard as it tries to wind down wars in Iraq and Afghanistan and faces criticism for being part of the coalition battling Moammar Gadhafi in Libya.

Congressional Republicans have pressed the administration to withdraw Ford from Syria, an ally of Iran that supports the Islamic militant groups Hezbollah in neighboring Lebanon and Hamas in the Gaza Strip. The U.S. did not send an ambassador to Damascus for five years in protest of Syria's alleged role in the assassination of a political leader in Lebanon.