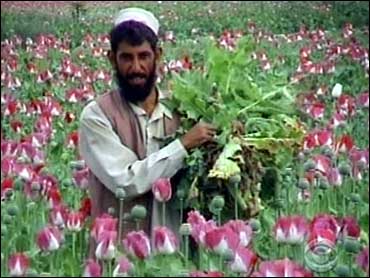 The U.S. on Monday agreed to hand out millions of dollars in development aid to provinces in Afghanistan that have eliminated or reduced the production of opium poppies, the raw ingredient in making heroin.

The poppy crop in Afghanistan, which produces 90 percent of the world's supply of opium, is linked to corruption, addiction and a drug trade that bankrolls the Taliban insurgency.

Curbing the cultivation of poppies is the goal of a U.S. program that has doled out $80 million since 2007. That includes the $38.7 million the U.S. announced it is giving to 27 of Afghanistan's 34 provinces that either reduced poppy cultivation by more than 10 percent or became poppy-free this year.

"Illicit narcotics is a very serious problem with exports around the world, but we need to recognize that they do grave harm to Afghan society as well," said E. Anthony Wayne, development director at the U.S. Embassy in Kabul. "The narcotics trade also feeds corruption, hindering Afghanistan's ability to build strong, democratic institutions and good governance. Narcotics also fuels the insurgency.

"Afghanistan has one of the highest addiction rates in the world, harming tens of thousands of people, damaging families and communities, limiting economic opportunity and depriving future generations the opportunity to make a better life."

In a separate program, the U.S. has opened 16 drug treatment clinics around the nation, and another 11 are expected in the next few months.

Determining which provinces will get the money is based on the U.N. Office of Drugs and Crime opium survey, which reported poppy cultivation decreased 22 percent this year. The money, which is administered by the Afghan Ministry of Counternarcotics, has been used in the past to provide farm machinery, dig irrigation canals, and build public buildings such as schools, clinics and stadiums.

Helmand province, a Taliban stronghold where U.S. and British troops launched major operations this summer, will receive $10 million - the maximum allowed under the program - for reducing poppy cultivation by 33 percent, said Gen. Khodaidad, Afghan minister of counternarcotics, who goes by only one name. Three provinces - Baghlan, Faryab and Kapisa - will get $1 million each for becoming poppy-free for the first time, he said.

Almost all of Afghanistan's opium is grown in Helmand and six other provinces - all areas under partial or total Taliban control.

U.S. and NATO troops began actively targeting drug warehouses for the first time this year. The U.N. reported that in the first half of this year, military operations destroyed 50 tons of opium, 7 tons of morphine, 1.5 tons of heroin, and 27 laboratories for turning opium into heroin.