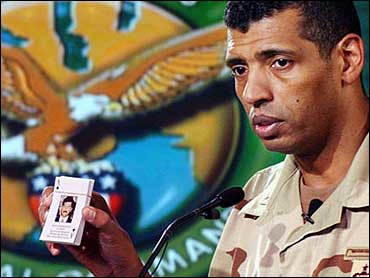 Saddam Hussein's former interior minister and a top member of his Baath party have been taken into custody, the latest arrests from a list of 55 most wanted Iraqi fugitives, the U.S. military said Wednesday.

Mizban Khadr Al Hadi, a high-ranking member of the Baath Party regional command and revolutionary command council, and former interior minister Mahmud Dhiyab Al-Ahmad were taken into custody on Tuesday, according to a statement from Tampa, Fla.-based U.S. Central Command.

Al Hadi, number 23 on the U.S. list of 55 most wanted Iraqis from Saddam's ousted regime, surrendered in the capital. Al-Ahmad, number 29 on the list, was also captured on Tuesday, the Central Command statement said. It gave no further details.

Just before the war began, al-Ahmad was named commander of one of four military regions for the defense of Iraq. He held a news conference just after the war began wearing a bulletproof vest in which he tucked a big knife and three ammunition magazines, and also brandished a Kalashnikov assault rifle.

"Some of you may be wondering why I am dressed like this," he asked at the time. "Well, because we in Iraq have pledged not to relinquish our guns until the day we are victorious."

Thirty-three out of the 55 people on the most wanted list are now in custody. The most recent arrest came June 17, when Abid Hamid Mahmud al-Tikriti, Saddam's top aide, surrendered after informants' tips led U.S. forces to his hideout in Saddam's hometown, Tikrit.

But Saddam and his two sons remain at large. The U.S. military recently offered a $25 million bounty for Saddam, and a $15 million reward for each of his two sons.

On Tuesday, U.S. soldiers raided a building in central Baghdad, following up on a claim by residents that say they thought they saw Saddam driving through the area on Monday, and say the ousted leader was met with cheering and gunfire by supporters.

Several pro-Saddam residents chanted pro-Saddam slogans on Tuesday as the U.S. servicemen conducted their sweep, with some singing: "With our souls and our blood we sacrifice ourselves for you Saddam"

The last verified sighting of Saddam came April 9 in the Azamiyah neighborhood of northeastern Baghdad as the capital fell to U.S. troops.

U.S. officials believe the uncertainty over Saddam's fate is fueling armed resistance to the American occupation. U.S. forces in Iraq have been targeted daily by ambushes, and dozens have died since the war's major fighting ended.

L. Paul Bremer, the top U.S. official in Iraq, said Tuesday that the coalition would not rest until Saddam's fate was determined and reassured Iraqis that he would never again rule their country.

He may be alive, but he is not coming back," he said. "I think the noose is going to tighten around his neck. His days in Iraq are finished."

Two Middle Eastern television channels broadcast Tuesday what they said were new audiotapes by Saddam, but the material on the tapes appeared previously in older recordings.

While both Al Hayat-LBC and Al-Jazeera channels said the tapes were new, they contained excerpts that were identical to a tape received by the Sydney Morning Herald in May that it then broadcast on its Web site.

The voice on the tapes, which sounded like Saddam to journalists familiar with the fallen dictator, quoted him as giving instructions to resist U.S. and British forces.

"I appeal to you, oh Iraqis, Arabs, Kurds and Turkmen, Shiites or Sunni, Christians or Muslims, it is your duty to expel the aggressor invaders from our country," the purported voice of Saddam said on the tape broadcast by Al Hayat-LBC.

Last week, Al-Jazeera broadcast extracts from another tape that CIA analysts said was "most likely" the voice of Saddam. The phrases and voice on the July 4 tape were similar to Tuesday's tapes.

Al-Jazeera said the July 4 tape was played to it down a telephone line, which helped to explain its poor quality. CIA analysts said the bad quality of that tape prevented them from being certain it was Saddam.

In the earlier tape, the speaker claims the recording was made on June 14. But intelligence officials said there were no references in the message that absolutely ruled out the possibility that it was prerecorded before June 14.