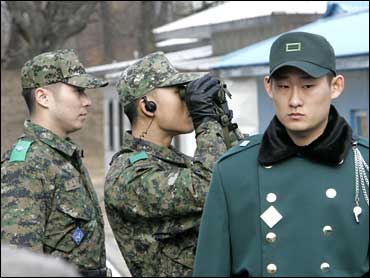 High-level military officials from North Korea and the U.S.-led U.N. Command held urgent talks at the border Monday amid heightened tensions in the region and concerns that the North intends to test-fire a long-range missile.

The talks at the village of Panmunjom inside the Demilitarized Zone dividing North and South Korea - the first meetings between general-level military officials since 2002 - were hastily arranged after the North proposed them last week, U.N. command spokesman Kim Yong-kyu said.

"These talks can be useful in building trust and preventing misunderstanding as well as introducing transparency regarding the intentions of both sides," the U.N. command said in a statement. Kim said his office would disclose details about the meeting after it was over.

Relations between the two Koreas are at their lowest point in a decade, with North Korea bristling over South Korean President Lee Myung-bak's hard-line policy toward Pyongyang. The two Koreas technically remain at war because their three-year conflict in the 1950s ended in a truce, not a peace treaty.

The tensions have intensified in recent weeks amid reports that North Korea is preparing to test a long-range missile believed capable of reaching U.S. territory.

Mr. Obama is dispatching his envoy for North Korea, Stephen W. Bosworth, to Asia this week to discuss the nuclear dispute. Bosworth plans to meet with officials in China, Japan and South Korea, and will consult separately with Russian officials, the State Department said.

The North last week called its plans a peaceful bid to push its space program forward by sending a communications satellite into orbit and warned it would "punish" anyone who attempts to disrupt its launch plan.

Neighboring governments believe the satellite claim may be a cover for a missile launch.

The U.S., South Korea and other neighboring nations have warned North Korea against firing either a missile or a satellite, saying both would invite international sanctions.

North Korea, which in 2006 tested a nuclear weapon and unsuccessfully fired a long-range missile, is banned from engaging in any ballistic missile activity under a U.N. Security Council resolution.

The North, meanwhile, stepped up the rhetoric against South Korea and the U.S., citing a policy of "confrontation" against the communist country.

"If the U.S. warlike forces opt for reckless military confrontation and provocation of a war of aggression against (North Korea), the latter will mercilessly stamp out aggressors," said Yang Hyong Sop, vice president of the parliament, the state-run Korean Central News Agency reported Sunday.

The warning comes as the U.S. and South Korea prepare for next week's annual military exercises, drills that North Korea calls a rehearsal for invasion but that Seoul and Washington say are purely defensive.

South Korea's new unification minister, Hyun In-taek, said Monday that Seoul is ready for dialogue with Pyongyang to improve the "difficult" ties between the neighboring nations.

The two Koreas remain divided by the world's most heavily fortified border, with the U.S.-led U.N. Command overseeing their 1953 cease-fire.

Although other nations contributed forces during the Korean War, U.S. troops are the only combat forces left on the peninsula apart from the South Korean military. The U.S. has 28,500 troops in South Korea.