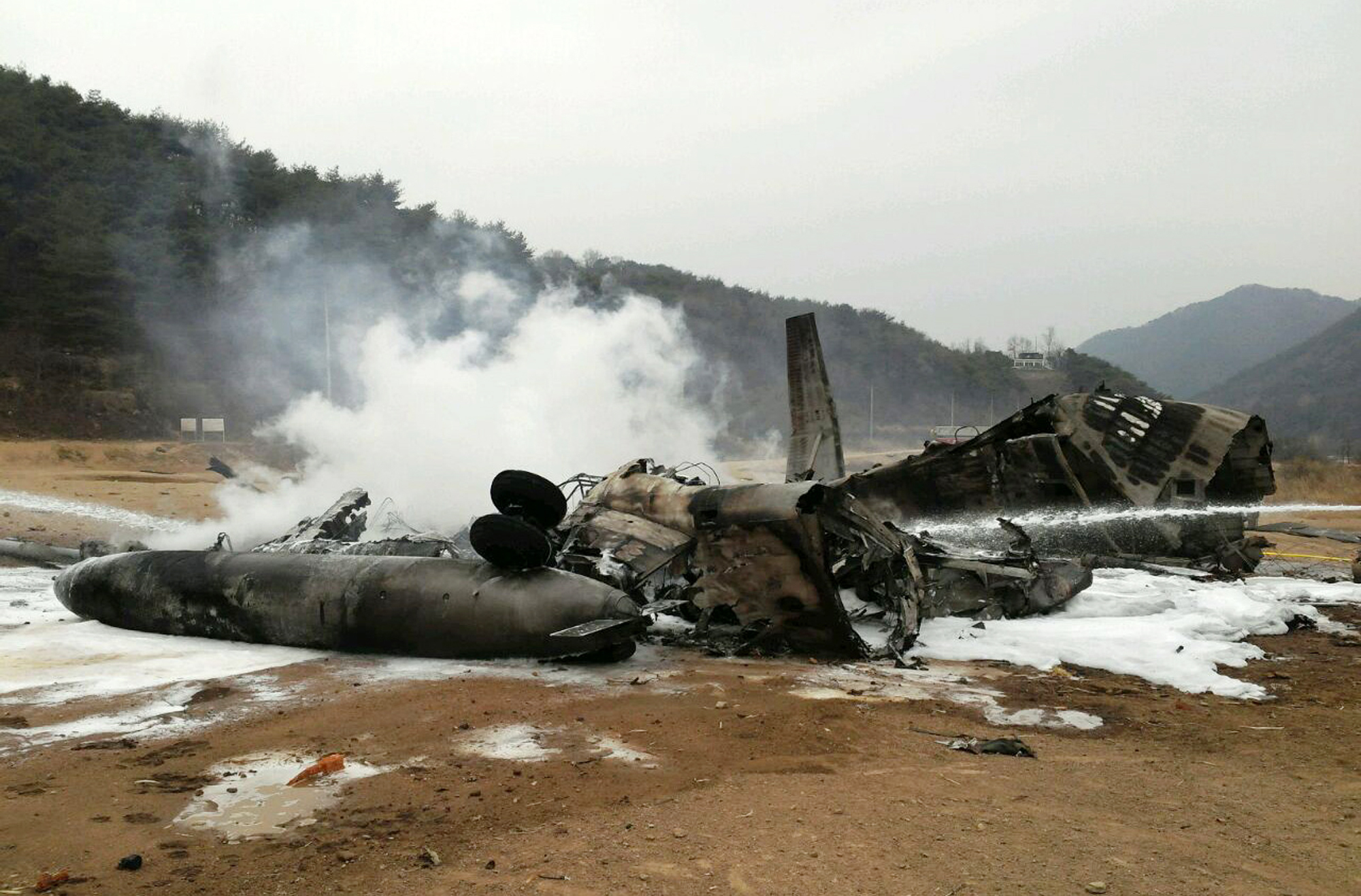 The military says all 21 on board, including 5 crew members, were brought to a hospital. Fifteen were released, and those still there are in stable condition, the military says.

The cause of the crash was being investigated.

Those exercises have led to a torrent of belligerent rhetoric from North Korea.

The crew is stationed in Okinawa, Japan, the military adds.

In the North, Pyongyang quietly marked a second day of celebrations for its first leader's birthday Tuesday and issued prickly new rhetoric threatening retaliation for what it sees as provocations by South Korea and the U.S., who have been watching closely for signs North Korea will go ahead with a suspected plan to test a medium-range missile.

State media said the Supreme Command of the Korean People's Army issued an ultimatum demanding an apology from South Korea for "hostile acts" and threatening that unspecified retaliatory actions would happen at any time.

The angry ultimatum, relayed through the Korean Central News Agency, was sparked by a protest of about 250 people in downtown Seoul, where effigies of Kim Il Sung and his son and successor, the late leader Kim Jong Il, were burned. One protester carried a placard saying "Kim Jong Un Out." Such protests are not unusual in South Korea and this one was likely more of a pretext for the North to react to calls that it join in dialogue with its neighbors than an actual cause for retaliation.

The North's statement said it would refuse any offers of talks with the South until it apologized for the "monstrous criminal act." North Korea often denounces such protests, but rarely in the name of the Supreme Command, which is headed by Kim Il Sung's grandson and the country's overall leader, Kim Jong Un.

"If the puppet authorities truly want dialogue and negotiations, they should apologize for all anti-DPRK hostile acts, big and small, and show the compatriots their will to stop all these acts in practice," the statement said. The Democratic People's Republic of Korea, or DPRK, is North Korea's official name.

The North's threat is "regrettable," Kim told reporters. "We will thoroughly and resolutely punish North Korea if it launches any provocation for whatever reason."

Pyongyang launched a rocket ahead of the last anniversary of Kim Il Sung's birth, the centennial, but the holiday this year has been much more low-key, with Pyongyang residents gathering in performance halls and plazas and taking advantage of subsidized treats, like shaved ice and peanuts, despite unseasonably cold weather.

The calm in Pyongyang has been a striking contrast to the steady flow of threats North Korea has issued over the military exercises between South Korea and the United States. Though the maneuvers, called Foal Eagle, are held regularly, North Korea was particularly angry over the inclusion this year of nuclear-capable B-2 stealth bombers and F-22 fighters.

"The ultimatum is just North Korea's way of saying that it's not willing or ready to talk with the South," said Chang Yong-seok at the Institute for Peace and Unification Studies at Seoul National University. "North Korea apparently wants to keep the cross-border relations tense for some time to come."

The ultimatum comes just after U.S. Secretary of State John Kerry wrapped up a tour to coordinate Washington's response with Beijing, North Korea's most important ally, as well as with Seoul and Tokyo. Kerry said a missile test would be provocation that would further isolate the country and its impoverished people.

To further coordinate their response, South Korea's new president, Park Geun-hye, will meet with President Obama on May 7 at the White House. White House press secretary Jay Carney said the leaders would discuss the North Korean threat and efforts to denuclearize the Korean Peninsula.

State Department spokesman Patrick Ventrell said the United States is open to dialogue, but only if Pyongyang proves itself to be trustworthy.

"The burden remains on Pyongyang. They need to take meaningful steps to show that they'll honor their commitments," Ventrell told reporters in Washington. "We need to see them be serious about denuclearization, indicate their seriousness, and start to reduce the threats and stop provocations."

North Korea has warned that the situation has grown so tense it cannot guarantee the safety of foreigners in the country and said embassies in Pyongyang should think about their evacuation plans. British Foreign Secretary William Hague said Monday that although there is reason for concern, Britain sees "no immediate increased risk or danger" to those living in or traveling to North Korea.

Instead, the front page of the Rodong Sinmun, the Workers' Party newspaper, on Tuesday featured photos of Kim Jong Un at an orchestral performance the night before along with his aunt, Kim Kyong Hui, and other top officials. North Korean media also reported that he watched volleyball and basketball games between Kim Il Sung University of Politics and Kim Il Sung Military University.