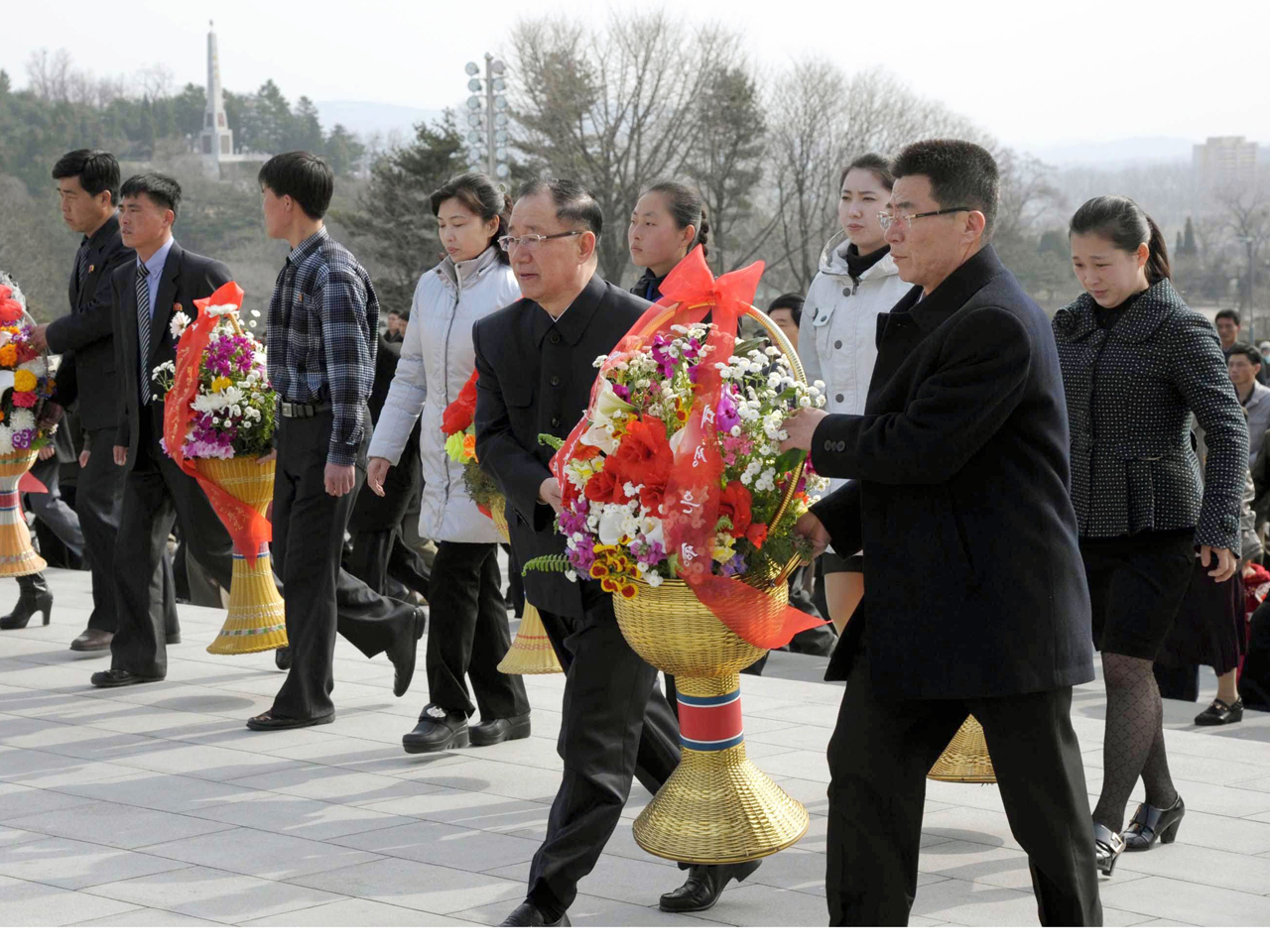 PYONGYANG, North Korea As North Koreans celebrated the birthday of their first leader Monday by dancing in plazas and snacking on peanuts, the government made a new threat of military action.

Foreign governments have been trying to assess how seriously to take North Korea's recent torrent of rhetoric warning of war if the U.S. and South Korea do not stop holding joint military maneuvers just across the border.

Officials in South Korea, the United States and Japan say intelligence indicates that Pyongyang, fresh off an underground nuclear test in February, appears ready to launch a medium-range missile. North Korea has already been slapped with strengthened U.N. sanctions for violating Security Council resolutions barring the regime from nuclear and missile activity.

As reported by Reuters, in a statement issued on Monday by the official North Korean news agency KCNA, Pyongyang warned Seoul, "Our retaliatory action will start without any notice from now."

CBS News correspondent Margaret Brennan, who was in Seoul and Tokyo to cover visits by U.S. Secretary of State John Kerry, reported Monday that, given the Kim family's history of making provocative moves on important dates, the U.S. and its allies were watching closely for a missile test from the North.

Kerry warned North Korea not to conduct a missile test, saying it would be provocation that "will raise people's temperatures" and further isolate the country and its impoverished people. He said Sunday that the U.S. was "prepared to reach out," but that Pyongyang must first bring down tensions and honor previous agreements.

Yet there was no sense of panic in the North Korean capital today, where very few locals have access to international broadcasts and foreign newspapers speculating about an imminent missile launch and detailing the international diplomacy under way to try to rein Pyongyang in.

Girls in red and pink jackets skipped along streets festooned with celebratory banners and flags and boys on inline skates took a break to slurp up bowls of shaved ice, at the start of the two-day holiday celebrating the birth of the nation's founder, Kim Il Sung.

In Seoul, South Korean Defense Minister Kim Kwan-jin told a parliamentary committee Monday that North Korea still appeared poised to launch a missile from its east coast, though he declined to disclose the source of his information.

North Korea has warned that the situation has grown so tense it cannot guarantee the safety of foreigners in the country and said embassies in Pyongyang should think about their evacuation plans. But British Foreign Secretary William Hague said Monday that although there is reason for concern over the "frenetic and bellicose" rhetoric, Britain believes there has been "no immediate increased risk or danger" to those living in or travelling to North Korea.

He said Britain does not see an immediate need to draw down embassy staff, but is keeping that under constant review. He added that, from discussions with other governments, the U.K. does not believe any foreign embassy in Pyongyang plans to close.

While concerns over North Korea continued to dominate headlines abroad, Pyongyang's own media gave little indication Monday of how high the tensions are.

The Rodong Sinmun, the Workers' Party newspaper, featured photos and coverage of current leader Kim Jong Un's overnight visit to the Kumsusan mausoleum to pay respects to his grandfather. There was only one line at the end of the article vowing to bring down the "robber-like U.S. imperialists."

Kim Jong Un's renovation of the memorial palace that once served as his grandfather's presidential offices opened to the public on Monday, the vast cement plaza replaced by fountains, park benches, trellises and tulips. Stretches of green lawn were marked by small signs indicating which businesses - including the Foreign Trade Bank recently added to a U.S. Treasury blacklist - and government agencies donated funds to help pay for the landscaping.

Starting from early in the morning, residents dressed in their finest clothing began walking from all parts of Pyongyang to lay flowers and bow before the bronze statues of Kim and his son, late leader Kim Jong Il, as the mournful "Song of Gen. Kim Il Sung" played over and over.

Their birthdays are considered the most important holidays of the year in North Korea, where reverence for the Kims is drummed into the people from the time they are toddlers. The largest basket of flowers at Mansu Hill was from Kim Jong Un, whose elaborate offering was cordoned off with ropes.

With that ritual out of the way, many stopped at food stalls set up at the base of Mansu Hill to warm up with tea and snacks. They queued at roadside snack stands for rations of peanuts, a holiday tradition.

"Although the situation is tense, people have got bright faces and are very happy," said Han Kyong Sim, who works at one of the beverage stands.

Later, as the day warmed up, scores of young women in a rainbow of sparkling traditional dresses thronged the parking lot outside Pyongyang Indoor Stadium for North Korea's version of square dancing.

Monday marked the official start of the new year according to North Korea's "juche" calendar, which begins with the day of Kim Il Sung's birth in 1912. But unlike last year, the centennial of his birthday, there are no big parades in store this week, and North Koreans were planning to use it as a day to catch up with friends and family.

North Korea is believed to be saving its parades and big parties for July 27, the 60th anniversary of the end of the Korean War, and the 65th anniversary in September of the founding of the nation.

But while there was little sense of crisis in Pyongyang, North Korea's official posture toward the outside appeared to be as hardline as ever.

A top North Korean leader, Kim Yong Nam, president of the Presidium of the Supreme People's Assembly, told officials Sunday that the North must bolster its nuclear arsenal further and "wage a stronger all-out action with the U.S. to cope with the prevailing wartime situation," according to state TV.

North Korea has also pulled workers from the Kaesong factory complex on its side of the Demilitarized Zone, the last remaining symbols of inter-Korean rapprochement, in a pointed jab at South Korea. South Korean-run factories provided more than 50,000 jobs for North Korea, where two-thirds of the population struggle with food shortages, according to the World Food Program.