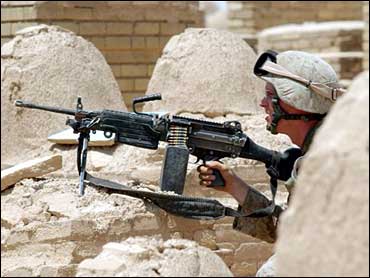 Thousands of U.S. troops and Iraqi soldiers launched a major assault Thursday on militiamen loyal to a radical Shiite cleric in Najaf, with explosions and gunfire echoing around the holy city's revered Imam Ali shrine and its vast cemetery.

The coalition forces were trying to crush an uprising led by cleric Muqtada al-Sadr, whose fighters have been battling U.S. troops in Shiite strongholds across Iraq for a week. Hundreds of people have fled in the last few days, moving in with relatives and friends in quieter neighborhoods, or out of Najaf entirely.

A column of U.S. tanks lined one edge of the cemetery, as a helicopter flew overhead on patrol. Soldiers crawled on the roofs of single-story buildings, setting up positions.

By Thursday afternoon, five civilians were killed, according to Nabil Mohammed, a health worker in Najaf. Two soldiers were injured when hit by a mortar shell while standing in an intersection of the cemetery, the military said.