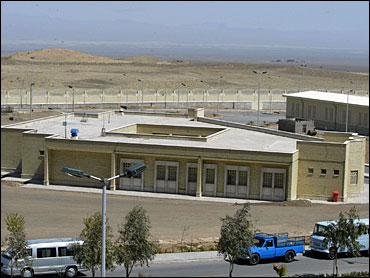 Iran halted its nuclear weapons development program in the fall of 2003 under international pressure but is continuing to enrich uranium, which means it may still be able to develop a weapon between 2010 and 2015, senior intelligence officials said Monday.

That finding, in a new National Intelligence Estimate on Iran, is a change from two years ago, when U.S. intelligence agencies believed Tehran was determined to develop a nuclear capability and was continuing its weapons development program. It suggests that Iran is susceptible to diplomatic pressure, the official said.

"Tehran's decision to halt its nuclear weapons program suggests it is less determined to develop nuclear weapons than we have been judging since 2005," states the unclassified summary of the secret report, released Monday.

Officials said the new findings suggest that diplomacy has been effective in containing Iran's nuclear ambitions.

"This is good news in that the U.S. policy coupled with the policies and actions of those who have been our partners appear to have had some success. Iran seems to have been pressured," one of the officials said. "Given that good news, we don't want to relax. We want to keep those pressures up."

The officials spoke on condition of anonymity because they were not authorized to speak on the record due to the subject's sensitivity.

The bottom line of this new estimate is not that the world doesn't have to worry anymore about Iranian nuclear weapons, reports CBS News national security correspondent David Martin.

The real bottom line, Martin adds, is how little U.S. intelligence knows about such a critical issue -- finding out four years after the fact that a nuclear weapons program was halted. Iran, according to one senior intelligence officer, is the hardest intelligence target in the world.

The finding comes at a time of escalating tensions between the United States and Iran, which President Bush has labeled part of an "axis of evil," along with Iraq and North Korea.

In a statement, White House national security adviser Stephen Hadley said the finding "offers some positive news. It confirms that we were right to be worried about Iran seeking to develop nuclear weapons. It tells us that we have made progress in trying to ensure that this does not happen."

But, Hadley warned, the "intelligence also tells us that the risk of Iran acquiring a nuclear weapon remains a very serious problem."

The halt to active weapons development is one of the key judgments of the latest NIE on Iran's nuclear program. National Intelligence Estimates represent the most authoritative written judgments of all 16 U.S. spy agencies.

Despite the suspension of its weapons program, Tehran may ultimately be difficult to dissuade from developing a nuclear bomb because Iran believes such a weapon would give it leverage to achieve its national security and foreign policy goals, the assessment concluded.

Director of National Intelligence Mike McConnell decided last month that the key judgments of NIEs should as a rule not be declassified and released. The intelligence officials said an exception was made in this case because the last assessment of Iran's nuclear program in 2005 has been influential in public debate about U.S. policy toward Iran, and needed to be updated to reflect the latest findings.

To develop a nuclear weapon, Iran needs a warhead design, a certain amount of fissile material, and a delivery vehicle such as a missile. The intelligence agencies now believe Iran halted design work four years ago and as of mid-2007 had not restarted it.

But Iran is continuing to enrich uranium for its civilian nuclear reactors. That leaves open the possibility the fissile material could be diverted to covert nuclear sites to make enough highly enriched uranium to make a bomb.

The amount of fissile material Iran has is closely linked to when it can produce a weapon. Even if the country went all out with present enrichment capability, it is unlikely to have enough until 2010 at the earliest, the officials said. The State Department's Intelligence and Research office believes the earliest likely time it would have enough highly enriched uranium would be 2013. But all agencies concede Iran may not have sufficient enriched uranium until after 2015.

Iran would not be capable of technically producing and reprocessing enough plutonium for a weapon before about 2015, the report states. But ultimately it has the technical and industrial capacity to build a bomb, "if it decides to do so," the intelligence agencies found.

"There was a very rigorous scrub using all the tradecraft available, using the lessons of 2002," a senior official said.