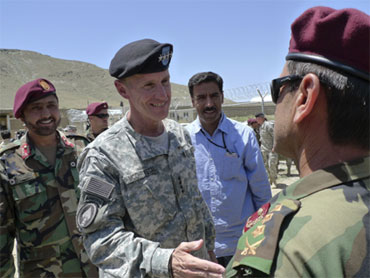 U.S. helicopters flew Afghan troops into a remote district overrun by the Taliban and recaptured the main town Tuesday without firing a shot, military officials said.

The move comes ahead of a major conference in Kabul starting Wednesday where Afghan President Hamid Karzai will try to build consensus for peace overtures to the insurgents. The Taliban on Tuesday dismissed the conference as serving the interests of "foreign invaders."

A unit of about 200 elite Afghan troops landed in Barg-e-Matal district of Nuristan province before dawn in an assault backed by U.S. helicopters and a handful of American advisers, U.S. officers familiar with the operation told The Associated Press.

They recaptured the main town in the region without shooting and no one was harmed, NATO said in a statement, though the operation was expected to continue for a few days. Taliban fighters were believed to have left the town and may have taken positions elsewhere in the valley.

Nuristan police chief Gen. Mohammad Qasim said Afghan forces had rebased themselves in police and government buildings in Barg-e-Matal, and were preparing for a possible counterstrike by militants.

"We were able to recapture Barg-e-Matal completely. Right now, there is no sign of militants, no sign of activity. We are ready, and we have the support of (NATO) air forces," he said at around nightfall Tuesday.

He said 54 militants were killed or wounded in fighting and airstrikes before Tuesday's operation began, and two police died.

Government forces pulled out of the rugged, mountainous region last weekend after hundreds of Taliban fighters swept into the area from nearby Pakistan and fought for almost a week with Afghan troops and local residents, who have a reputation for fierce resistance to outsiders.

U.S. troops had established an outpost in Nuristan but abandoned it last October after eight American soldiers were killed in a fierce Taliban attack. Insurgent strength has grown in the region since, prompting fears that Taliban who have come under pressure from U.S. missile strikes and military operations in nearby Pakistan could be looking for a new haven.

The U.S. officers said Taliban fighters - mostly Afghans but also Pakistanis and a few Arabs - are thought to number about 500, spread out over an area of about 15 miles (25 kilometers) in a forested mountain valley.

Villagers reported that a senior Pakistani Taliban commander, Maluana Fazlullah, had been killed in fighting with Afghan troops in Nuristan last week, but officials have not been able to confirm it.

Nuristan is very isolated and far removed from the main battlefields in Afghanistan's south, with a small, scattered population and limited strategic value. But taking back Barg-e-Matal would be an important symbolic victory for the Afghan military, which is often criticized as ineffective. Washington also badly wants to hand more control of security to Afghan troops.

"This successful operation by Afghan forces will return governance to Barg-e-Matal," Interior Ministry spokesman Zemarai Bashary said in a statement Tuesday. "This operation shows the improved planning and operational capabilities of our joint forces in response to serious incidents even in the most remote locations of Afghanistan."

NATO airstrikes pounded the area Monday ahead of the operation, targeting a cave complex Taliban leaders were believed to use as a command center, said the U.S. officers, who spoke on condition of anonymity because the information was sensitive.

The airlifted Afghan troops were to join up with 400 Afghan security forces that withdrew from Barg-e-Matal but were still in the region.

Up to 1,500 civilians living in and around the main town had fled or been evacuated before the operation started.

Fighting also raged in other parts of the country.

About 180 Taliban attacked a police post Monday in the Purchaman district in southwestern Farah province, triggering hours of fighting that killed 15 insurgents, one police official and six villagers who joined the fight on the government side, said provincial police chief Mohammad Faqir Askar.

In an operation in Khost province on Pakistan's border, NATO and Afghan forces captured several commanders of the Haqqani group, a Pakistan-based Afghan Taliban faction with close ties to al Qaeda, a NATO statement said.

Meanwhile, a U.S. general took formal command of the bulk of British troops in Afghanistan as part of plans to streamline NATO operations in the south.

Marine Maj. Gen. Richard Mills took control of 8,000 British forces in Helmand and Nimroz provinces that will become part of a new command structure splitting southwestern provinces from those farther east, including Kandahar. A British officer remains in charge of U.K. forces in Kandahar, Daykundi, Uruzgan and Zabul provinces.

Military spokesman Maj. Gen. Gordon Messenger told the British Broadcasting Corp. the changes would make little difference to the troops on the ground.