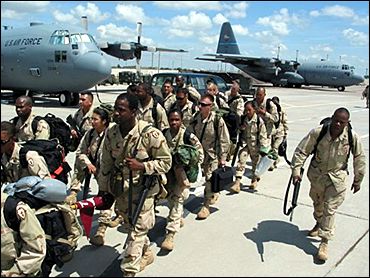 Washington's plans to beef up its military base in Uzbekistan as part of a troop realignment abroad could whip up tensions between the impoverished ex-Soviet republic's secular government and radical Islamic groups, analysts and opposition politicians say.

Top Pentagon officials said Monday that the United States would make greater use of training and logistics bases on the soil of new allies such as Uzbekistan, Poland and Romania, while closing some U.S. installations in Europe to consolidate forces at larger bases there.

The moves, planned to occur over 10 years, are intended shift American forces from a Cold War footing to positions closer to the Middle East and other areas key to the war on terrorism.

U.S. troops arrived at the Karshi-Khanabad air base in southern Uzbekistan, 90 miles from the Afghan border, in 2001 after the Sept. 11 attacks in their first deployment in a former Soviet country.

The base, which currently hosts about 1,000 U.S. troops, served as a main hub for U.S. special operations in Afghanistan, with the number of troops there at times reaching several thousand. The Americans always stressed that they intended the base to be temporary.

Foreign Minister Sadyk Safayev had said earlier that the Uzbek government, based in Tashkent, would consider a permanent U.S. base if Washington wanted one. However, Tashkent has always been tightlipped on the extent of the base and insisted it's used only for humanitarian operations — a line considered vital to head off public discontent.

Uzbek officials and the U.S. Embassy in Tashkent declined comment on the Pentagon's latest statement.

Atonazar Arifov, leader of the outlawed Erk party, said a more permanent U.S. military presence could strengthen anti-American feeling among Uzbeks because they have allegedly seen only "a reverse effect" on democratic development from Tashkent's increased ties with Washington.

"I welcome American democracy, but I cannot respect the use of force," he said.

Uzbekistan — a landlocked country slightly larger than the state of California where 26 million people live — was one of several governments criticized in a May report by Amnesty International looking at civil liberties under the war on terrorism.

President Islam Karimov's government has long struggled with radical Islamic groups, which easily find followers among Uzbeks frustrated by the lack of economic and democratic reforms.

In March and April, the capital Tashkent and the central Bukhara region were shaken by a string of explosions and assaults against police that killed 47 people. Last month, suicide bombers attacked the U.S. and Israeli embassies and the chief prosecutor's office in Tashkent, killing seven and injuring another seven.

Authorities said both waves of attacks were the work of al Qaeda-linked groups based outside the country.

However, critics said the violence may have been triggered by Islamic fundamentalists' anger over Karimov's persecution of dissident Muslims. Thousands of devout Muslims — who make up 88 percent of the population — have been imprisoned.

An Aug. 3 U.S. travel advisory says that, "U.S. citizens should evaluate carefully the implications for their security and safety before deciding to travel to or around Uzbekistan."

Kamal Burkhanov, director of the Kazakhstan-based Institute of Russia and China, said Washington's plans to consolidate its military position in Central Asia could provoke further attacks by Islamic radicals.

"Nothing can strengthen Karimov's position now," he said. "One or two more American bases will hardly improve the situation there, which is very explosive."

"They are going to take it as justification of their recent attacks against the U.S. and Israeli embassies," he said.