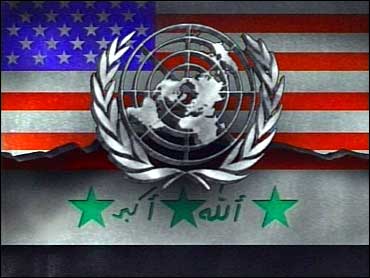 The government has identified 300 Iraqis in the 60 countries whom officials want expelled, the U.S. officials said. Some are operating as diplomats out of Iraqi embassies, the officials said, adding that the foreign governments are expected to comply with the U.S. request.

State Department spokesman Philip Reeker confirmed the expulsion request but offered no information on the number of countries or their identities, or on how many suspected Iraqi agents are involved.

Reeker said the action has no bearing on possible U.S. military action against Iraq.

The government officials, asking not to be identified, said the State Department made similar requests of foreign governments before the 1991 Persian Gulf War.

The current request comes as a U.S.-led war against Iraq appears increasingly likely. U.S. officials and outside analysts have warned that an attack on Iraq could well trigger attacks on U.S. interests by Iraq or its allies.

In that event, he said, there would be a world "where Saddam and the likes of Saddam are emboldened to acquire and wield weapons of mass destruction."

In New York, Iraqi Ambassador Iraq's U.N. Ambassador Mohammed Al-Douri said the two Iraqis being expelled men were informed of the expulsion order Tuesday at 6 p.m. EST and given 72 hours to leave the United States.

"The two attaches were engaged in activities outside the scope of their official function," the department said. "Federal law enforcement authorities deemed the activities to be harmful to our national security."

The men have the ranks of attaches but are not on the list of personnel accredited to the United Nations, Al-Douri said.

"They are the security personnel of the mission, the guards," the ambassador told The Associated Press. "They are living in the basement of the (Iraqi) mission."

Last month, the U.S. government expelled an Iraqi journalist who covered the United Nations for the official Iraqi News Agency, saying he was "harmful" to the security of the United States.

Al-Douri has complained that U.S. officials have tried to get members of Iraq's U.N. mission to defect.