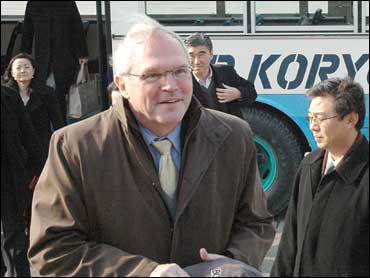 North Korean efforts to disable its plutonium-producing reactor are going well but the work needs to continue if deadlines are to be met, a top U.S. nuclear envoy said Wednesday.

"The disablement activities are going well and on schedule," Hill told reporters before leaving Pyongyang and heading to Beijing. "I'm satisfied with the results."

"But we have to keep working because we have more to do to meet our deadlines," said Hill, who also met his North Korean counterpart, Vice Foreign Minister Kim Kye Gwan.

North Korea had promised to complete the disabling by the end of the year, but South Korean nuclear envoy Chun Yung-woo said last week it would take longer to remove about 8,000 spent fuel rods from the reactor.

Even so, the disablement, which will make the reactor difficult to restart, is the biggest step the communist nation has taken to scale back its nuclear programs since 2003, when six-nation negotiations aimed at ending the North's nuclear ambitions began. Participants are the two Koreas, the U.S., China, Japan and Russia.

North Korea also is required to declare all its nuclear programs by year's end. That declaration will serve as a map of all of the North's nuclear programs that Washington hopes can be dismantled by the end of 2008.

Hill said North Korea was "working hard on a declaration" and that he had made clear that it needed to be "complete and comprehensive."

"I'm sure they will be prepared to meet the deadline," Hill said.

North Korea began disabling the reactor, which was shut down in July, and two other facilities last month under the watch of U.S. experts.

Hill said he had "a good two days of talks" and that the North Koreans in the Yongbyon complex, north of Pyongyang, appeared to be cooperating with the Americans.

The U.S. envoy also toured Pyongyang and rode a subway together with other members of his delegation, including Sung Kim, the State Department's top Korea expert, according to video from AP Television News.

Hill visited North Korea once before in June, becoming the first high-level U.S. official to visit the secretive country in more than four years.