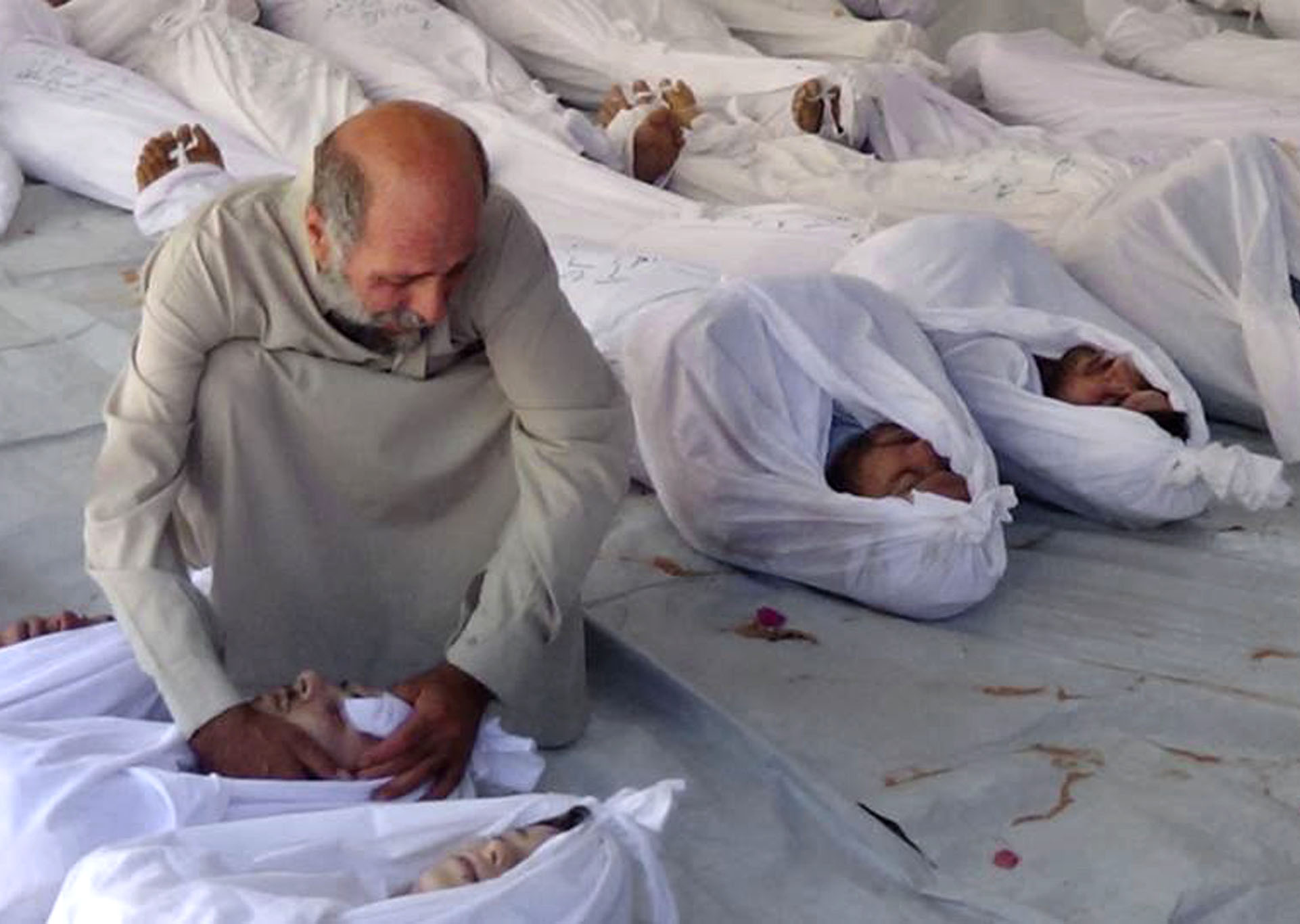 Similar activity has been detected before, and the assumption then was that the Syrians were moving things around for security reasons. Now, according to the officials, the most recent activity, which was detected last week, is seen as possible preparation for Wednesday's attack.

The officials also said U.S. intelligence agencies are now leaning to the conclusion that Syria did use chemical weapons.

The revelation comes as President Obama called the attack a "big event of grave concern" that has hastened the timeframe for determining a U.S. response.

"This is something that is going to require America's attention," Mr. Obama said during an interview broadcast Friday.

However, the president said the notion that the U.S. alone can end Syria's bloody civil war is "overstated" and made clear he would seek international support before taking large-scale action.

"If the U.S. goes in and attacks another country without a U.N. mandate and without clear evidence that can be presented, then there are questions in terms of whether international law supports it, do we have the coalition to make it work," he said in the interview on CNN's "New Day" show. "Those are considerations that we have to take into account."

In a preview of a "Face the Nation" interview broadcast on "CBS This Morning" Friday, former Secretary of State Colin Powell told CBS News chief Washington correspondent Bob Schieffer that the U.S. has few options in Syria.

"In both Egypt and Syria, America has to take a much more, a much more clever role," Powell told Schieffer in the interview to be broadcast in full on Sunday. "We shouldn't go around thinking that we can really make things happen. We can influence things, and we can be ready to help people when problems have been resolved or one side has prevailed over the other. That's when I think we can play a role."

On "CBS This Morning," Schieffer said he didn't think the president would send American troops to Syria and that the conflict has to somehow be solved diplomatically.

"If we could somehow work with Russia and get the fighting stopped, then, perhaps, we could figure out where we go from there," Schieffer told co-hosts Gayle King and Charlie Rose.

CBS News correspondent Margaret Brennan reported on "CBS This Morning" that an increasing chorus of European nations are pinning the blame for this week's alleged chemical attack in the eastern Damascus suburbs squarely on the Assad regime, and urging decisive action, but the White House is keeping up the push for an international mandate.

British Foreign Secretary William Hague said Friday the only "plausible explanation for casualties so intense in such a small area" was a chemical attack. In a statement on TV, he said chances the Syrian opposition was behind the attack were "vanishingly small. We do believe this is a chemical attack by the Assad regime on a large scale."

Hague did not echo a French statement that force could be used if the attack is proven to be the work of the regime. But he said "we don't rule out any option for the future."

Mr. Obama has come under mounting pressure from political friends and foes in Washington, and around the world, to take more significant action to stem the violence in Syria.

His administration said weeks ago that it was prepared to start providing material assistance to rebel groups, but those supplies - which include, theoretically, weapons - have yet to arrive.

Mr. Obama's comments on Syria were his first since Wednesday's alleged chemical weapons attack. While he appeared to signal some greater urgency in responding, his comments were largely in line with his previous statements throughout the two-year conflict.

The president said the U.S. is still seeking conclusive evidence that chemical weapons were used this week. Such actions, he said, would be troubling and would be detrimental to "some core national interests that the United States has, both in terms of us making sure that weapons of mass destruction are not proliferating, as well as needing to protect our allies, our bases in the region."

Wednesday's attack came as a United Nations team was on the ground in Syria investigating earlier chemical weapons attacks. Mr. Obama has warned that the use of the deadly gases would cross a "red line," but the U.S. response to the confirmed attacks earlier this year has been minimal.

That has opened Mr. Obama up to fierce criticism, both in the U.S. and abroad. Among those leading the criticism is Arizona's Republican Sen. John McCain, who says America's credibility has been damaged because Mr. Obama has not taken more forceful action to stop the violence.

The president pushed back at those assertions in the interview aired Friday, saying that while the U.S. remains "the one indispensable nation," that does not mean the country should get involved everywhere immediately.

"Well, you know, I am sympathetic to Sen. McCain's passion for helping people work through what is an extraordinarily difficult and heartbreaking situation, both in Syria and in Egypt," he said.

"Sometimes what we've seen is that folks will call for immediate action, jumping into stuff, that does not turn out well," he said. "We have to think through strategically what's going to be in our long-term national interests, even as we work cooperatively internationally to do everything we can to put pressure on those who would kill innocent civilians."

The U.S. has called on Syria to allow the U.N. team currently on the ground to investigate this most recent attack. However, the president was pessimistic about those prospects, saying, "We don't expect cooperation, given their past history."

More than 100,000 people have been killed in Syria during more than two years of clashes between forces loyal to Syrian President Bashar Assad and opposition fighters seeking to overthrow his regime. The U.S. has long called for Assad to go and has sent humanitarian aid to the rebels, but those steps have failed to push the Syrian leader from power.

Mr. Obama addressed the deepening crisis in Syria from central New York, where he is on a two-day bus tour promoting policies to make college more affordable.