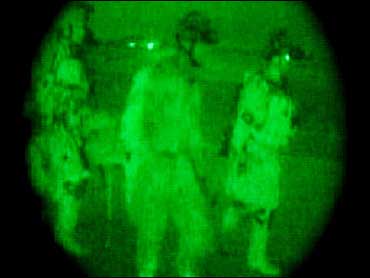 The April 1 rescue of prisoner of war Pfc. Jessica Lynch was a huge morale booster for the United States, and a big propaganda victory — that much is certain.

The proof is in the grainy night-vision footage of the raid, and the still picture of Lynch in a rescue helicopter with a folded American flag on her chest.

But whether it was a military operation or a photo opportunity depends on whom is asked.

An Associated Press reporter spoke to more than 20 doctors, nurses and other workers at the Iraqi hospital where Lynch had been held.

In interview after interview, the assessment was the same: The dramatics that surrounded Lynch's rescue were unnecessary. Some also said the raid itself was unneeded because they were trying to turn Lynch over, although they conceded they made no attempt to notify U.S. troops of that effort.

"If they had come to the door and asked for Jessica, we would have gladly handed her over to them. There was no need for all that drama," said Dr. Hazem Rikabi, an internist.

Pentagon officials bristle at any suggestion that Lynch's rescue was staged or that any details were exaggerated.

Describing the raid in an April 2 briefing, Brig. Gen. Vincent Brooks said the operation had involved " bringing her away from that location of danger, clearing the building of some of the military activity that was in there."

Later, Brooks added, "Some brave souls put their lives on the line to make this happen; loyal to a creed that they know, that they'll never leave a fallen comrade and never embarrass their country."

U.S. military officers say that the rescuers didn't know Iraqi troops had left Nasariyah General Hospital and that the Americans had to storm in ready to deal with any circumstance.

American military doctrine calls for using overwhelming force in such situations. "We don't want it to be a fair fight," Marine Lt. Col. David Lapan, a Pentagon spokesman, told AP this week. "The fact that we didn't encounter heavy resistance in the hospital was a good thing."

They add that U.S. troops outside the hospital were fired on and that fighting was still going on elsewhere in the southern city, which saw some of the fiercest combat of the war.

"You don't have perfect knowledge when you go in of what resistance you will face, so you prepare for the worst," Lapan said.

Nasariyah was a combat zone and American troops were being attacked by Iraqis dressed in civilian clothes elsewhere in the area, he said. U.S. troops supporting the raid — though not the rescue team itself — were fired on from other parts of the hospital compound, Lapan said.

Lynch, an Army supply clerk, was captured March 23 after her convoy was ambushed in Nasariyah three days after the war began.

In the hospital, staffers said, Lynch made friends from around the building with her kind ways and jokes, and employees went out of their way to keep her comfortable.

U.S. officials have said Lynch, who is recovering in a Washington hospital, doesn't remember anything about her capture, and she has not yet commented publicly about her time in Iraq.

A day before Iraqi troops left the hospital, doctors said, the staff received instructions from Nasariyah's governor, Younis Ahmed al-Thareb, to transfer Lynch to the Maternity and Children's Hospital on the other side of the Euphrates River, where American forces were in control.

The governor told them it was for her own safety because he feared the Americans might attack the hospital because Iraqi soldiers were there, al-Jabbar and others said.

But they also said they didn't try to notify U.S. troops of their intention. They said an ambulance carrying Lynch set out at 11:45 p.m., but as it approached the al-Zaytoun Bridge in the darkness it was fired on by American troops and the driver sped back to the hospital.

"The next day, we decided to put her on a donkey cart so she would be in open view of the U.S. soldiers," said Dr. Miqdad al-Khazaei.

But before they could do that, Iraqi forces — including the regional commander of the Baath Party, Adel Abdallah al-Doori, and the governor — began pulling out of the hospital and the city, al-Khazaei said. "By noon, they were all gone," he said.

Less than 30 minutes later, he heard helicopters flying over the hospital. Tanks and armored personnel carriers parked outside. Then he heard loud voices: "Go! Go! Go!"

The commandos burst in.

Al-Jabbar said the soldiers declined an offer of the hospital's master key so they wouldn't have to break down the doors.

"They pointed the gun at us for two hours," he said. "Their manner was very rude. They even handcuffed the director of the hospital. … Not a single shot was fired at them. They shot at doors — all doors. They broke them, kicked them open."

Al-Hazbar said he had expected a raid but was surprised by its intensity. He claims the soldiers appeared to be firing blanks, something the military denies and weapons experts contend is highly unlikely.

U.S. officers have said Lynch's rescue was launched after an Iraqi lawyer, Mohammed Odeh al-Rehaief, mapped out her location for U.S. Marines over several days.

Al-Rehaief and his family were moved to the United States for safety, and he has accepted a job with the Livingston Group, a lobbying firm in Washington. Jim Pruitt, an associate of the firm, said Wednesday that al-Rehaief had no comment about the rescue. "When the time comes, Mohammed will tell his story in great detail," Pruitt said.

The former POW's parents said Thursday they are not permitted to discuss details of their daughter's capture and rescue in Iraq.

"It is still an ongoing investigation," Greg Lynch said during a news conference at the family's rural West Virginia home.