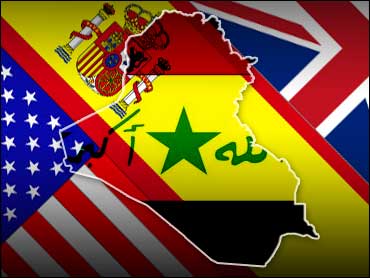 Thirty nations have joined with the United States in a "coalition of the willing" to bring down Iraqi President Saddam Hussein and another 15 quietly have promised their support, Secretary of State Colin Powell said Tuesday.

At the same time, Powell said Saddam so far had rejected President Bush's demand that he leave Iraq, but that a number of countries were still trying to persuade the Iraqi president to go into exile.

"He has essentially dismissed the message," Powell said.

Mr. Bush gave Saddam until 8 p.m. EST Wednesday to flee and avoid invasion. But Iraq's al-Shabab television reported Tuesday that a joint meeting of the Revolution Command Council and the leadership of the ruling Baath party, chaired by Saddam, had rejected Mr. Bush's demand that he and sons Odai and Qusay depart.

"Iraq doesn't choose its path through foreigners and doesn't choose its leaders by decree from Washington, London or Tel Aviv," a statement from the Iraqi meeting read by the station said. Earlier, Odai Hussein, Saddam's elder son, personally rejected the U.S. ultimatum.

The White House warned the Iraqi leader that remaining in Baghdad could be a fatal misstep.

"Saddam Hussein has led Iraq to many mistakes in the past, principally by developing weapons of mass destruction," Mr. Bush said. "Saddam Hussein, if he doesn't leave the country, will make his final mistake."

Asked where Saddam should go if he chooses exile, White House spokesperson Ari Fleischer spat back quickly: "Away!"

Fleischer declined to name any countries that might provide Saddam refuge, and said the U.S. will not guarantee Saddam safe passage nor agree to grant him immunity.

In his speech Monday night, Mr. Bush contended there can be no "appeasement" of Saddam because it could bring "destruction of a kind never before seen on this earth."

The president said Saddam has a history of hating America, has ties to terrorists and is a destabilizing force in the Middle East. Primarily, he said Saddam could turn his weapons of mass destruction over to terrorist groups. Iraq denies possessing such weapons.

"Saddam Hussein and his sons must leave Iraq within 48 hours," Mr. Bush said. "Their refusal to do so will result in military conflict to commence at a time of our choosing."

Anticipating war, the exodus from Baghdad continued Tuesday. France ordered its consular officials home, more weapons inspectors departed, and private citizens scurried to get flights out. People in Baghdad hoping to stock up on provisions for the looming war found that Iraq's dinar was losing value.

Fleischer said that even if Saddam leaves the country, U.S. forces will still enter Iraq for the purpose of disarming it of weapons of mass destruction. It would be done in a peaceful manner, he said.

The Pentagon is providing precise instructions to the Iraqi forces on how to lay down their weapons. A spokeswoman for the U.S. military said the directions include telling the Iraqis how to place their equipment in a way that would signal they do not intend to fight.

The State Department released a list of the 30 countries, one of which, Japan, was identified as only a post-conflict member of the coalition.

Indeed, most of the coalition members were unlikely to play a large role in the fighting.

"The overwhelming amount of combat will be provided by a small number of countries," Fleischer said. "Other nations are free to contribute as they see fit." He declined to estimate how long the war, if it occurs, would last.

The State Department's list of 30 countries that are members of a "Coalition for the Immediate Disarmament of Iraq'':