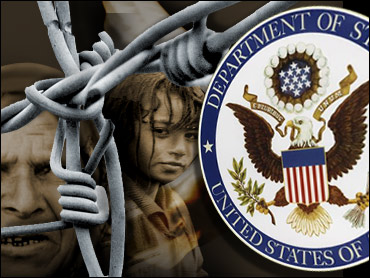 Four U.S. allies in the Middle East are among countries added to a State Department list of nations that are not doing enough to stop international human trafficking, a practice the department described as modern-day slavery.

The State Department on Friday said 14 countries could be subject to sanctions because they are not cracking down on trafficking. The list includes eight new countries: Bolivia, Cambodia, Jamaica, Kuwait, Qatar, Saudi Arabia, Togo and the United Arab Emirates.

Saudi Arabia is a key U.S. ally whose de facto leader, Crown Prince Abdullah, visited President Bush at his Texas ranch in April. Kuwait, Qatar and the United Arab Emirates also are allies, and the United States maintains an important military base in Qatar.

An estimated 600,000 to 800,000 people are trafficked across international borders annually, the report said. Eighty percent are female and 50 percent are children.

"The child sold by his parents to the owner of a brick kiln on the outskirts of his rural Indian village is a trafficking victim," the report said. "So is the Mexican man who legally or illegally migrates to the United States only to be beaten by his agricultural crew leader to keep him from leaving the job."

Countries that were previously on the list and remain there this year are Myanmar, Cuba, Ecuador, North Korea, Sudan and Venezuela.

Countries that fail to do enough to eliminate human trafficking can be subject to a variety of punishments, including the withholding of some kinds of U.S. foreign aid. The United States will not cut off trade and humanitarian aid, the report said.

Countries that receive no such assistance can be declared ineligible to taker part in cultural and educational exchange programs.

Countries that were on the list in 2004 and have been removed from this year's list are Bangladesh, Equatorial Guinea, Guyana and Sierra Leone.

Congress began requiring the annual reports in 2000. This is the fifth report.

The United States spends $96 million to help other countries combat trafficking, Secretary of State Condoleezza Rice wrote in a forward to the report.