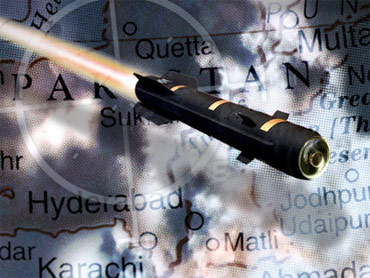 The strikes took place in the Datta Khel area of the North Waziristan tribal region — the main sanctuary for al Qaeda and Taliban fighters along the Afghan border, said the officials, speaking on condition of anonymity because they were not authorized to talk to the media.

The roughly three dozen suspected militants at the meeting were allied with Hafiz Gul Bahadur, a powerful Pakistani Taliban commander in the area who has focused his efforts on fighting foreign troops in Afghanistan, said the officials. The insurgents were discussing plans to send new groups of fighters across the border, the intelligence officials added.

There were conflicting reports about exactly how many of the militants were killed. One set of Pakistani intelligence officials said 32 people died in the strikes, while another put the number at 34. It's unclear if anyone escaped the strike and if there were wounded.

The most senior militant killed in the attack was Sharabat Khan, Bahadur's top commander for the Datta Khel area, who was leading the meeting, said the officials. Several foreign militants were also killed, they said.

The United States began firing missiles at militant targets in Pakistan in 2004, but the pace of the attacks picked up dramatically in 2008. Last year, there were around 120 strikes, which are believed to be carried out by unmanned drone aircraft launched either from Afghanistan or from inside Pakistan. There have been around 20 so far this year.

Most of the strikes this year and last have been in North Waziristan.

Washington does not acknowledge firing the missiles and reporters are barred from visiting the area, meaning it is hard to verify who is being killed. Pakistani leaders formally protest the strikes, but its intelligence agencies are widely believed to cooperate in some of them.