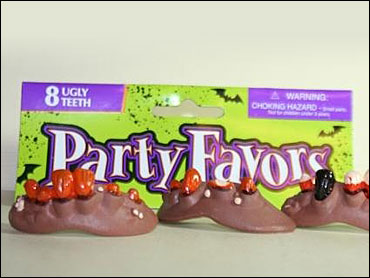 A professor and his assistants at Ashland University in Ohio routinely test toys -- in their spare time -- for unsafe levels of lead. Some of the information Dr. Jeffrey Weidenhammer has provided to the Consumer Product Safety Commission has resulted in recalls, reports CBS News correspondent Hari Sreenivasan.

Now, says Sreenivasan, Weidenhammer and his team have found what they say are dangerous amounts of lead in some toys meant for kids to use on Halloween -- and they hope the CPSC issues speedy recalls before the holiday on Wednesday.

One toy in focus is called "ugly teeth." Besides being ugly, the fake plastic teeth have what the researchers say is 100 times the allowable levels of lead in the paint.

The teeth are just one of dozens of Halloween toys Weidenhammer and his team tested.

They say they also found high lead levels in some Halloween baskets, but they say the plastic teeth are of greatest concern because lead enters the system fastest when ingested.

On Thursday, the CPSC issued a recall of Halloween pails that children might use to carry their treats in, based partly on tests the professor and his lab had done.

They say they also found high levels in a Frankenstein cup and white skull bucket, but never received an explanation about why those two items weren't recalled.

In a statement to CBS News, the CPSC would only say it "welcomes information from a variety of sources that may assist us in our investigation."

Acting CPSC Chairman Nancy Nord recently complained to Congress about the agency's lack of resources, and confirmed that the commission only has one person who tests toys.

It usually takes the CPSC a few days to run its own tests or investigate complaints but, Sreenivasan says, considering how the toys Weidenhammer is worried about could be in the hands and mouths of children Wednesday, Weidenhammer hopes his warning becomes the CPSC's top priority.

Jeffrey Weidenhammer comes across as a mild-mannered, matter-of-fact chemistry professor from Ashland University in Ohio, but get him started on the amount of lead in products on store shelves today, and you'll begin to hear a combination of the urgency, disappointment and frustration in his measured voice.

On top of the courses he teaches, he has been cajoling grad students and volunteers to come in on Saturdays and help him test for high levels of lead in the trinkets, metal jewelry and plastic toys that he finds all too readily available in the cheapest discount stores around him.

His sadness flows from the fact that his ad-hoc group is perhaps able to spend more time testing all these products than the Consumer Products Safety Commission -- an agency which has been complaining to Congress about its antiquated facilities, limited resources, low levels of staffing and inability to nab every dangerous product landing on U.S. shores.

The past few months have shined a harsh light on products from China and the amount of lead in the paint covering toys, paint that could slowly be ingested by the children playing with them and that could eventually lead to serious health problems or, in rare cases, death. Wiedenhammer and his team haven't chosen to focus on products from China, but most of the products available at the stores that sell the cheapest goods ("dollar stores," etc.) are from there. He has been looking at products that would most likely find their way into the hands and mouths of children.

Wiedenhammer's disappointment and frustration spring from what he says is the lack of "any explanation" for why some of his research is acknowledged with a recall and some is not. For example, a few weeks ago, he sent in a complaint with detailed lab results on a three different Halloween products: a witch pail, a skull bucket, and a Frankenstein cup. All had high levels of lead in the paint, but only the witch pail was recalled.

Now, two days before Halloween, he has filed another complaint with the CPSC, and this time his focus has been the test results of three products after looking at almost three dozen different Halloween-themed toys. The ugly teeth -- fake plastic fangs children may place in their mouths -- are his greatest concern, because lead is ingested through the mouth much more quickly than through the skin. He also identifies two different types of Halloween baskets that have lead levels far higher than allowable.

Perhaps this is inevitabile when you combine a bureaucracy that says it is overwhelmed in regulating the safety of all imports, a consumer who is addicted to falling prices at seemingly all costs, and a public that votes with its dollars and ballots to maintain the status quo. 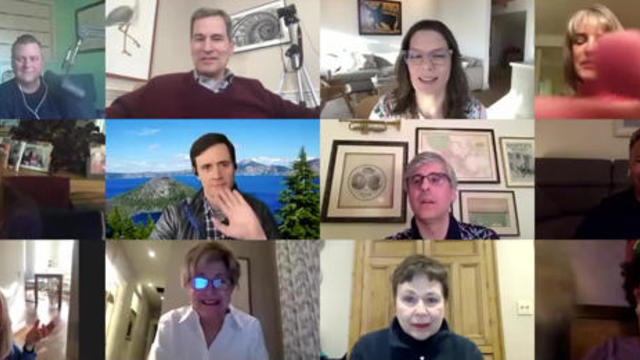 The video-conferencing service has been plagued by security lapses in recent months, but still doubled its revenue. 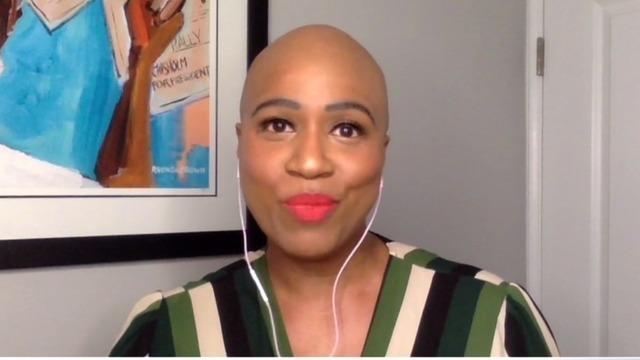 "Hurt has been put on black folks," Rep. Pressley said. "Let us legislate healing and justice."