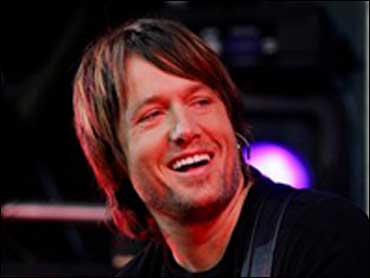 Country music singer and recovering alcoholic Keith Urban knew he was back in Australia when a Qantas flight attendant welcomed him with a bottle of wine.

The Grammy winner and country music chart-topper, who has publicly acknowledged a former addiction to cocaine, recently completed a three-month stint in rehab for alcohol abuse.

Urban, 39, who grew up in Australia, was offered a complimentary bottle of red wine during a recent Qantas Airways flight from Sydney to the South Australia state capital, Adelaide, part of a world tour for his latest album, "Love, Pain & the whole crazy thing."

"I knew I was back in South Australia when the host came up to me, smiled, gave me a bottle of red and said, 'Welcome to Adelaide, Mr. Urban,'" the country music star told a packed stadium on Sunday, according to a report in News Ltd. newspapers Tuesday.

Urban's manager, Rob Potts, rushed to assure fans the singer was only joking.

"He didn't drink it at all," he was quoted as saying. "I've been with him for years, and I have a sense of how together he is and how determined he is to put it into his career."

In a brief statement, Qantas said the gaffe was a routine customer-relations gesture "by an individual staff member who genuinely did not realize who the passenger was."

The New Zealand-born Urban checked himself into the Betty Ford Center in Rancho Mirage, Calif., last October, less than four months after his wedding to Australian actress Nicole Kidman.

South Australia is home to some of the country's most productive wine regions.