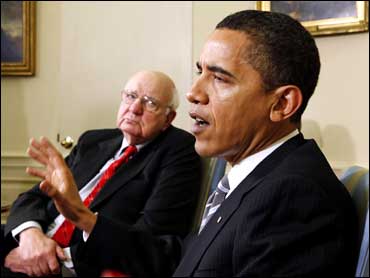 Turning more upbeat, President Barack Obama said Friday his administration is working to create a "post-bubble" model for solid economic growth once the recession ends. He said that means the days of overheated housing markets and "people maxing out on their credit cards" are over.

But first, Mr. Obama said, "We've got to get through this difficult period."

There are "modestly encouraging signs" on that score, said Lawrence Summers, Obama's top economic adviser, citing indications that consumer spending had stabilized after taking a dive over the holiday season.

The stimulus plan, Summers said, is already saving thousands of public employee jobs, including as many as 14,000 teachers in New York alone, reports CBS News chief White House correspondent Chip Reid. But he stressed that a full turnaround could still be a long way off, and said it will happen only when Americans overcome their "excess of fear."

The White House attempts to be positive matched a fourth day in a row of stock market gains. The Dow Jones industrials gained 53.92 points to cap Wall Street's best week since last November.

Administration officials were criticized earlier this year for painting too dark a picture of the economy in an effort to win congressional passage of the president's $787 billion stimulus package. But more recently, the president and others on his team have tempered their comments in hopes of building confidence, including the president's suggestion last week that it was a good time for those with a long-term perspective to buy stocks.

Despite the new enthusiasm at the White House and on Wall Street, there was little solid evidence to suggest an end was in sight to the severe recession that has already cost the U.S. over four million jobs, driven home values down and sent foreclosures soaring.

And there were fresh signs of financial stress. The Commerce Department reported Friday that the U.S. trade deficit plunged in January to the lowest level in six years as the economic downturn cut America's demand for imported goods.

And China's premier, Wen Jiabao, expressed concern over the U.S. economy and the value of his own nation's vast holdings in Treasury bonds. China is Washington's biggest foreign creditor, holding an estimated $1 trillion in U.S. government debt.

"We have lent a huge amount of money to the U.S., so of course, we are concerned about the safety of our assets," Wen told reporters in Beijing.

But in Washington, Summers said it was time for America to move past an "excess of fear" that has made things worse.

For businesses that can overcome their fear, Summers argued, this is a good moment for long-term investment, Reid reports.

Summers, who was treasury secretary under President Bill Clinton and now is director of Obama's National Economic Council, said it was too soon to gauge the broad impact of the administration's recovery program or to predict when the recession might end. But he suggested glimmers of hope.

Speaking at a Brookings Institution forum, he was asked by a member of the audience what the nation's business community could do to help speed the recovery.

"What we need today is more optimism and more confidence," Summers said.

He called it a "very good moment" to make investments in new construction and other projects. "There are a very large number of things that are on sale today."

The White House has been on a weeklong campaign to promote the president's economic recovery and financial stability plans while giving a more upbeat assessment of the economy's ability to rebound. Summers had been working on his speech for five days.

Obama economic adviser Christina Romer delivered a speech along the same themes earlier in the week, and Obama on Thursday offered business leaders his view that the crisis is "not as bad as we think."

As for the Chinese premier's comments on U.S. Treasury bonds, White House spokesman Robert Gibbs said, "There's no safer investment in the world than in the United States." He urged lawmakers to adopt the president's budget, saying it would lead to fiscal discipline in the long term.

Mr. Obama spoke with reporters after meeting with former Federal Reserve Chairman Paul Volcker, chairman of his Economic Recovery Advisory Board. The president said the days of overheated housing markets and maxed-out credit cards are over.

"It is very important even as we're focused on the financial system and the credit markets, that we are laying the foundation for what I'm calling a post-bubble economic growth model," Mr. Obama said.

"There are a lot of individual families who are experiencing incredible pain and hardship right now," Mr. Obama said. "But we're providing help along the way." He mentioned aid for troubled homeowners and other moves and promised to soon lay out "additional steps to help small businesses."

Meanwhile, the government said the U.S. trade imbalance dropped to $36 billion in January, the lowest level since October 2002. However, the politically sensitive shortfall with China bucked the trend, rising by 3.5 percent to $20.6 billion.

U.S. manufacturing companies, battered by what they view as unfair competition from China, said that the continued high deficit with that nation pointed to a need for the Obama administration to take a tougher line on trade rules with the Chinese.

Heads of state from both the United States and China will be among leaders of the Group of 20 advanced and developing nations meeting in London early next month to try to chart a common approach to taming the global recession.

Finance ministers from those 20 nations, including Treasury Secretary Timothy Geithner, were meeting near London this weekend to discuss the April agenda. Geithner was seeking a commitment from the other countries to increase stimulus spending. But many in Europe are calling for better financial regulation, not spending.

Mr. Obama said it was important to coordinate "with other countries in order to assure that what we do here in the United States corresponds with strong efforts overseas." But he also said that overhauling financial regulation was something "we have to do very carefully."

Volcker told reporters that restructuring regulation of the financial system was "a very complicated matter."

Also, he said, "There are big economic problems behind the financial system, too, that are going to take longer to work out."