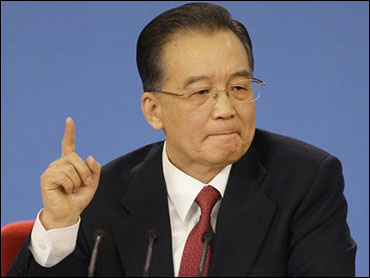 China's premier expressed concern Friday about its massive holdings of Treasuries and other U.S. debt, appealing to Washington to safeguard their value, and said Beijing is ready to expand its stimulus if the economy worsens.

Premier Wen Jiabao noted that Beijing is the biggest foreign creditor to the United States and called on Washington to see that its response to the global slowdown does not damage the value of Chinese holdings.

"We have made a huge amount of loans to the United States. Of course we are concerned about the safety of our assets. To be honest, I'm a little bit worried," Wen said at a news conference following the closing of China's annual legislative session. "I would like to call on the United States to honor its words, stay a credible nation and ensure the safety of Chinese assets."

Wen's comments foreshadowed possible appeals to President Barack Obama, who will meet with Chinese President Hu Jintao at a London summit of leaders of the G-20 group of major economies on April 2 to discuss the global financial crisis.

Analysts estimate that nearly half of China's $2 trillion in currency reserves are in U.S. Treasuries and notes issued by other government-affiliated agencies.

"They are worried about forever-rising deficits, which may devalue Treasuries by pushing interest rates higher," said JP Morgan economist Frank Gong. "Inside China there has been a lot of debate about whether they should continue to buy Treasuries."

The comments come as finance ministers and central bankers of the G-20 gather in London this weekend to discuss the crisis and possible remedies.

U.S. Treasury Secretary Timothy Geithner is pressing for a new coordinated stimulus but European governments are reluctant to take on more debt before they see how current plans are working. The Europeans want to emphasize the need for greater regulation of markets, including a crackdown on tax havens and increased control over hedge funds.

In Beijing, Wen expressed confidence China can emerge from its slump "at an early date," and said the government is ready to expand its 4 trillion yuan ($586 billion) stimulus to boost growth in the world's third-largest economy.

Communist leaders worry about rising job losses and possible unrest amid a trade slump that saw Chinese exports fall 25.7 percent in February from a year earlier. They have promised to spend heavily to create jobs and boost exports.

"We already have our plans ready to tackle even more difficult times, and to do that we have reserved adequate ammunition," Wen said. "That means that at any time we can introduce new stimulus policies."

In nearby Japan, Prime Minister Taro Aso called Friday for a fresh stimulus to help lift the world's second-largest economy out of "an unprecedented economic crisis." The comments helped spark a rally in Japan's stock market, where the Nikkei 225 stock index surged 5.2 percent.

China's Wen and other officials point to rising bank lending, power demand and other signs the stimulus is taking effect. But growth in retail sales is weakening, suggesting it has yet to spur private sector spending and investment, which analysts say will be key to its success.

Wen said Beijing can meet its 2009 growth target of 8 percent, despite skepticism by private sector economists, who expect as little as 5 percent. That would be the strongest of any major country but could lead to more waves of job cuts.

"I really believe we will be able to walk out of the shadow of the financial crisis at an early date," he said. "After this trial, I believe the Chinese economy will show greater vitality."

The premier promised to focus on job creation and give more help to smaller companies, which he said generate 90 percent of Chinese new employment.

"We will pay all attention possible to this issue and we will never overlook this issue," he said.

Wen said Beijing wants the London summit to focus on the plight of poor countries.