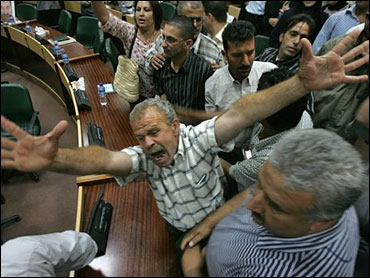 Dozens of Palestinian civil servants stormed a parliamentary session on Wednesday to demand long-overdue salaries, attacking Hamas lawmakers and forcing the parliament speaker to flee the building. No injuries were reported.

There may be hope for the Palestinian Authority. It's reported that Palestinian Foreign Minister Mahmoud Zahar, who has been seeking to raise money for the financially strapped government, returned to the Gaza Strip on Wednesday with a suitcase full of cash, officials said, possibly as much as $20 million.

This second attack on the parliament this week, along with the shooting death of a Hamas gunmen in the Gaza Strip, cast doubt on renewed efforts by leaders of the rival Fatah and Hamas parties to halt their increasingly deadly infighting.

President Mahmoud Abbas of Fatah, who was elected separately last year, and Prime Minister Ismail Haniyeh of Hamas agreed late Tuesday to start a weeklong series of meetings to try to reach an agreement over a proposal that implicitly recognizes the Jewish state. The two men, joined by senior security commanders, continued their talks on Wednesday.

During the melee, some demonstrators climbed onto lawmakers' desks. At one point, security guards broke up a scuffle between two female lawmakers. Lawmakers and demonstrators continued to shout at each other even after the violence subsided.

The Palestinian Authority has been unable to pay the salaries of civil servants since taking office more than three months ago. The financial crisis has caused severe hardship throughout the West Bank and Gaza.

Hamas is broke in the wake of U.S. and European sanctions, reports , but it continues to reject international demands to renounce violence and recognize Israel, a move which might remove the sanctions and restore aid.

Most of the demonstrators were believed to be members of Fatah, the rival movement of President Mahmoud Abbas which Hamas defeated in January legislative elections.

"I'm not coming back until they leave," Duaik said as he rushed out.

Order was restored after about 45 minutes, and the parliamentary session resumed.

Haniyeh said Abbas had agreed to incorporate the militia into the regular police force in Gaza. But he declined to say when this might take place. Hamas has twice pledged to remove the militia out of public places, but it remains in position.

The wider dialogue between Fatah and Hamas has concentrated on a plan that calls for a Palestinian state alongside Israel and in effect recognizes the Jewish state.

Abbas believes the plan gives the Palestinians a way to form a united political front. But if the talks fail, he has scheduled a July 26 referendum on the plan, over Hamas' objections. Hamas, which is sworn to Israel's destruction, wants changes in the language of the document, but Abbas says it will not be revised.