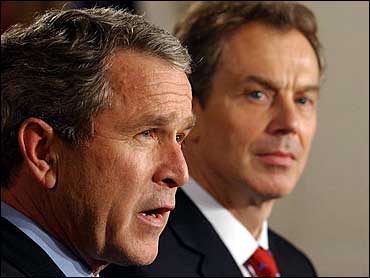 President Bush said Friday he would welcome a second U.N. resolution on Iraq but only if it led to the prompt disarming of Saddam Hussein. Pushing more forcefully for the measure, British Prime Minister Tony Blair called confronting Iraq "a test of the international community."

But, as Chief White House Correspondent John Roberts reports, although Mr. Bush publicly said he might go along with a second U.N. resolution against Iraq, he is wary that France - which opposes war - would drag out the process for weeks. So the White House is working through third countries to cajole France to fall in line, Roberts reports.

Both leaders dismissed Iraq's offer to host U.N. weapons inspectors before their next interim report. Mr. Bush called the invitation a charade meant to "string the inspectors along."

Showing little patience for the Iraqi leader or for allies trying to slow his pace toward war, Mr. Bush said, "Any attempt to drag this process out for months will be resisted by the United States."

Buffeted by criticism both at home and abroad, the staunch allies met for three hours in Mr. Bush's private White House quarters to review their plans for diplomacy and war — and to turn up pressure on Saddam.

Standing side by side outside the ornate Blue Room, a chandelier sparkling in the television lights, the leaders conducted a news conference without revealing any deadlines for war or new strategies for curbing stiff international resistance to their views.

"This issue will come to a head in a matter of weeks," Mr. Bush said.

"Time is running out," echoed Blair.

But the brief public exchange revealed their differences over diplomatic tactics and the extent of Saddam's threat.

Mr. Bush accused Iraq of being linked to Osama bin Laden's al Qaeda network and said those ties "portend a danger for America and for Great Britain, anybody who loves freedom." Blair notably did not repeat the accusation, though he said terrorist networks in general are a threat to obtain weapons of mass destruction.

On the idea of new U.N. resolution authorizing war to disarm Iraq, Mr. Bush said, "It'd be welcome if it is yet another signal that we're intent upon disarming Saddam Hussein." He was less positive about the idea than Blair, who said it is important that the United Nation "comes together again" and passes a resolution.

The U.N. Security Council voted 15-0 last fall to demand that Saddam rid Iraq of chemical, biological and nuclear weapons or face "serious consequences," a phrase both Mr. Bush and Blair say allows for military conflict without a second resolution. Iraq says it has no such weapons.

Blair, eager for political cover amid accusations that he is following Mr. Bush's lead too closely, wants a second resolution to underscore the world's collective disgust with Saddam.

Mr. Bush won't seek a second resolution unless he is assured it won't be vetoed on the Security Council, administration officials said. They said France's position is the hardest to gauge.

U.S. officials said the leaders are not far apart on the issue but that Blair is pushing harder than Bush, and the president would like to accommodate his closest ally against Iraq. Still, Mr. Bush noted that last fall's resolution "gives us the authority to move without any second resolution."

"Why are they calling back the inspectors? I think it's fairly obvious," Blair said. "It's because as the pressure grows, they want to play the same games as they've been playing all the way through."

On Capitol Hill, Senate Minority Leader Tom Daschle of South Dakota and three other top Democrats sent a letter to Bush requesting that Powell brief the Senate before he speaks to the United Nations.

Elsewhere Friday, in the buildup to potential war:

Turkey's top military and civilian leaders endorsed allowing foreign troops to be based in the country. The move could pave the way for U.S. troops to use Turkey as a base against Iraq.

U.S. aircraft dropped 36,000 leaflets over a southern Iraq city alerting citizens to radio messages that, among other things, urge a revolt against Saddam.

Blair has committed 35,000 troops for the Persian Gulf, by far the largest commitment outside the U.S. force.

In Washington, rain and fog made helicopter travel hazardous, forcing Mr. Bush and Blair to meet at the White House instead of the cozier confines of the Camp David mountaintop retreat.

Their meeting was part of what the White House says will be a busy, brief round of diplomacy aimed at building the case against Saddam.

Beforehand, Powell and Vice President Dick Cheney set the stage with grim portrayals of Iraq under Saddam. "This enemy is not an enemy you can deter. This is an enemy we must destroy," Powell said.