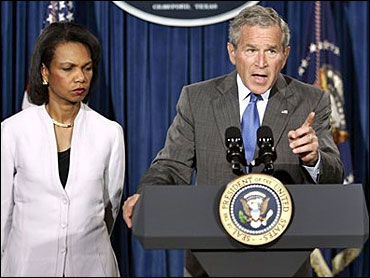 This column was written by Katha Pollitt.

If you control the language, you control the debate. As the Bush Administration's Middle Eastern policy sinks ever deeper into bloody incoherence, the "war on terror" has been getting a quiet linguistic makeover. It's becoming the "war on Islamic fascism." The term has been around for a while--Nexis takes it back to 1990, when the writer and historian Malise Ruthven used "Islamo-fascism" in the London Independent to describe the authoritarian governments of the Muslim world; after 9/11 it was picked up by neocons and prowar pundits, including Stephen Schwartz in the Spectator and Christopher Hitchens in this magazine, to describe a broad swath of Muslim bad guys from Osama to the mullahs of Iran.

But the term moved into the mainstream this August when Bush referred to the recently thwarted Britain-based suicide attack plot on airplanes as "a stark reminder that this nation is at war with Islamic fascists." Joe Lieberman compares Iraq to "the Spanish Civil War, which was the harbinger of what was to come." The move away from "war on terrorism" arrives not a moment too soon for language fussbudgets who had problems with the idea of making war on a tactic. To say nothing of those who wondered why, if terrorism was the problem, invading Iraq was the solution. (From the President's August 21 press conference: Q: "But what did Iraq have to do with September 11?" A: "Nothing." Now he tells us!)

What's wrong with "Islamo-fascism"? For starters, it's a terrible historical analogy. Italian Fascism, German Nazism and other European fascist movements of the 1920s and '30s were nationalist and secular, closely allied with international capital and aimed at creating powerful, up-to-date, all-encompassing states. Some of the trappings might have been anti-modernist--Mussolini looked back to ancient Rome, the Nazis were fascinated by Nordic mythology and other Wagnerian folderol--but the basic thrust was modern, bureaucratic and rational. You wouldn't find a fascist leader consulting the Bible to figure out how to organize the banking system or the penal code or the women's fashion industry. Even its anti-Semitism was "scientific": The problem was the Jews' genetic inferiority and otherness, which countless biologists, anthropologists and medical researchers were called upon to prove--not that the Jews killed Christ and refused to accept the true faith.

Call me pedantic, but if only to remind us that the worst barbarities of the modern era were committed by the most modern people, I think it is worth preserving "fascism" as a term with specific historical content.

Second, and more important, "Islamo-fascism" conflates a wide variety of disparate states, movements and organizations as if, like the fascists, they all want similar things and are working together to achieve them. Neocons have called Saddam Hussein and the Baathists of Syria Islamo-fascists, but these relatively secular nationalist tyrants have nothing in common with shadowy, stateless, fundamentalist Al Qaeda--as even Bush now acknowledges--or with the Taliban, who want to return Afghanistan to the seventh century; and the Taliban aren't much like Iran, which is different from (and somewhat less repressive than) Saudi Arabia--whoops, our big ally in the Middle East!

Who are the "Islamo-fascists" in Saudi Arabia--the current regime or its religious-fanatical opponents? It was under the actually existing US-supported government that female students were forced back into their burning school rather than be allowed to escape unveiled. Under that government people are lashed and beheaded, women can't vote or drive, non-Muslim worship is forbidden, a religious dress code is enforced by the state through violence and Wahhabism--the "Islamo-fascist" denomination--is exported around the globe.

"Islamo-fascism" looks like an analytic term, but really it's an emotional one, intended to get us to think less and fear more. It presents the bewildering politics of the Muslim world as a simple matter of Us versus Them, with war to the end the only answer, as with Hitler. If you doubt that every other British Muslim under the age of 30 is ready to blow himself up for Allah, or that shredding the Constitution is the way to protect ourselves from suicide bombers, if you think that Hamas might be less popular if Palestinians were less miserable, you get cast as Neville Chamberlain, while Bush plays FDR. "Islamo-fascism" rescues the neocons from harsh verdicts on the invasion of Iraq ("cakewalk ... roses ... sweetmeats ... Chalabi") by reframing that ongoing debacle as a minor chapter in a much larger story of evil madmen who want to fly the green flag of Islam over the capitals of the West. Suddenly it's just a detail that Saddam wasn't connected with 9/11, had no WMDs, was not poised to attack the United States or Israel--he hated freedom, and that was enough. It doesn't matter, either, that Iraqi Sunnis and Shiites seem less interested in uniting the umma than in murdering one another. With luck we'll be scared we won't ask why anyone should listen to another word from people who were spectacularly wrong about the biggest politico-military initiative of the past thirty years, and their balding heads will continue to glow on our TV screens for many nights to come. On to Tehran!

It remains to be seen if "Islamo-fascism" will win back the socially liberal "security moms" who voted for Bush in 2004 but have recently been moving toward the Democrats. But the word is already getting a big reaction in the Muslim world. As I write the New York Times is carrying a full page "open letter" to Bush from the Al Kharafi Group, the mammoth Kuwaiti construction company, featuring photos of dead and wounded Lebanese civilians. "We think there is a misunderstanding in determining: "'Who deserves to be accused of being a fascist'!!!!"

"Islamo-fascism" enrages to no purpose the dwindling number of Muslims who don't already hate us. At the same time, it clouds with ideology a range of situations--Lebanon, Palestine, airplane and subway bombings, Afghanistan, Iraq--we need to see clearly and distinctly and deal with in a focused way. No wonder the people who brought us the disaster in Iraq are so fond of it.

By Katha Pollitt
Reprinted with permission from The Nation