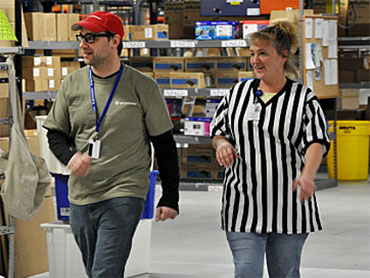 Michael Rubin, the CEO of GSI Commerce, went undercover at the company he founded as a teenager on Sunday night's episode of "Undercover Boss."

On "Undercover Boss," Rubin got in the trenches with his employees who work at his company filling boxes, sealing and sticking address labels on packages, and listening to customer complaints over the phone.

During his time preparing boxes to be shipped, Rubin had a hard time keeping up with his co-workers. His slow work speed sealing boxes and problems putting shipping labels on correctly led him to be told by his manager that his services were no longer needed.

During his time undercover, Rubin saw the best and worst of his employees. One woman worked seven days a week and still raised money for her child's football team in her spare time. Rubin was so affected by her story that he donated $5,000 to the team for equipment.

On the other side of the spectrum, he also encountered an employee who was rude to a customer on the phone who was complaining about being sent damaged goods. Rubin, who listened in during the phone conversation, was shocked by her demeanor.

Later in the show it was said that even after being "retrained," she was no longer with the company.