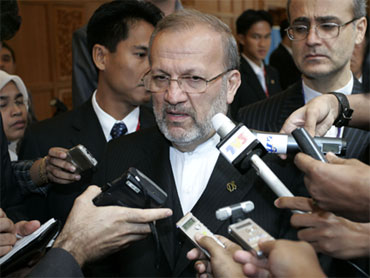 The head of the U.N. nuclear agency urged Iran on Monday to clarify its response to a U.S.-backed proposal that would have Tehran ship most of its nuclear material abroad for processing.

Addressing the U.N. General Assembly, Mohamed ElBaradei said "a number of questions and allegations relevant to the nature" of Iran's program remained, and he called for confidence building measures on all sides.

"I therefore urge Iran to be as forthcoming as possible in responding soon to my recent proposal, based on the initiative of the U.S., Russia and France, which aimed to engage in a series of measures that could build confidence and trust," ElBaradei said in his final address before stepping down after 12 years as chief of the International Atomic Energy Agency.

The U.S. and other powers are concerned Iran may be enriching uranium for use in nuclear weapons, while Tehran insists its program is strictly for research and energy production.

Iranian officials sent mixed signals on the proposal that would have Tehran export 70 percent of its enriched uranium - enough to build a bomb - and having it returned as fuel for its research reactor, with the foreign minister saying Monday that option still exists and a senior diplomat suggesting the opposite.

The appear designed to keep the international community off balance on how far Iran is ready to go in accepting the original proposal.

They also appeared geared toward pushing the plan's main backers into further talks, something those countries oppose as a delaying tactic.

In his address, ElBaradei also dismissed the growing calls for sanctions to dissuade Iran from its nuclear ambitions saying that they "too often hurt the most vulnerable and innocent."

He said the Security Council should instead focus on "conflict prevention and address the insecurities that lie behind many cases of proliferation such as mistrust and unresolved conflict."

Some experts say Iran has little reason to trust the West and for that reason may be in no hurry to cut a deal.

"Iran believes time is on their side for now," said Mustafa Alani, a regional analyst at the Gulf Research Center in Dubai.

The dispute allows Iranian President Mahmoud Ahmadinejad and his hard-line allies to claim the high ground as defenders of Iran's national dignity through its strides in nuclear technology. It also provides Ahmadinejad a chance to broaden support after June's disputed elections, because even his harshest opponents take pride in Iran's nuclear accomplishments.

In a posting on a government Web site, Ahmadinejad scolded the West for what he called a history of broken promises. Iran, he said, "looks at the talks with no trust."

On Monday, ElBaradei called for confidence building measures on all sides.

"The issue at stake remains that of mutual guarantees amongst the parties," ElBaradei said, adding "trust and confidence-building are an incremental process that requires focusing on the big picture and a willingness to take risks for peace."

While Iran insists it is interested only in enriching uranium for use in a future network of nuclear reactors, it has amassed more than 3,300 pounds of low-enriched uranium - more than enough to arm a nuclear warhead.

Iranian Foreign Minister Manouchehr Mottaki, who spoke to reporters in Kuala Lumpur, simply replied "No," when asked if his country had rejected the plan that would commit his country to ship out most of its enriched uranium.

Instead, he said Iran has three options to procure fuel for its reactor; to buy the fuel from other countries; to enrich the uranium domestically, or to accept the U.N.-brokered plan.

"We want to buy the fuel from any supplier," he told The Associated Press, fending off repeated questions on whether this meant the rejection of the export plan.

Soltanieh's comments were the most concrete statement yet by a government official of what the Iranian government wanted.

But the U.S. and its allies are unlikely to accept anything substantially less than the original plan, which aimed to delay Iran's ability of making nuclear weapons by at least a year by divesting Iran of most of its enriched uranium and returning it as research reactor fuel.

If 70 percent of Iran's uranium is exported in one shipment - or at the most two shipments in quick succession - Tehran would need about a year to produce enough uranium to again have the stockpile it needs for one weapon.

It is relatively simple to turn fuel-grade uranium into weapons-grade material.

Ahmadinejad's government has also raised some red flags by indicating it will take decades before any Iranian nuclear network is in place, meaning Iran has no immediate use for the enriched uranium it has accumulated.