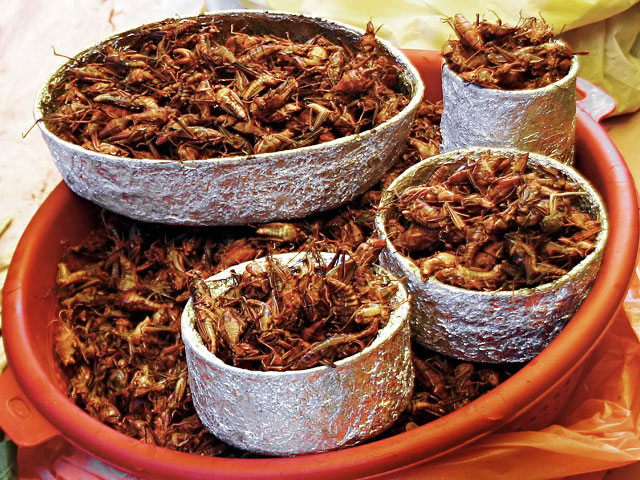 The U.N.'s Food and Agriculture Organization (FAO) said on Monday that grasshoppers, ants and other members of the insect world are an underutilized food for people, livestock and pets.

According to the 200-page report released Monday at a news conference in Rome, 2 billion people worldwide already supplement their diets with insects, which are high in protein and minerals, and have environmental benefits. The practice of eating bugs is known as entomophagy

Insects contain "good fats", can be rich in calcium, copper, iron, magnesium, manganese, phosphorus, selenium and zinc, and are a source of fiber.

The report calls insects a healthy, nutritious alternative to mainstream staples like chicken, pork, beef and even fish.

Insects are ''extremely efficient" in converting feed into edible meat because they are cold-blooded, the agency said. On average, they can convert 4.4 pounds of feed 2.2 pounds of insect mass. In comparison, cattle require 17.6 pounds of feed to produce 2.2 pounds of meat.

Most insects are likely to produce fewer environmentally harmful greenhouse gases, and also feed on human and food waste, compost and animal slurry, with the products being used for agricultural feed, the agency said.

Currently, most edible insects are gathered in forests and what insect farming does take place is often family-run and serves niche markets. But the U.N. says mechanization can ratchet up insect farming production. The fish bait industry, for example, has long farmed insects.

Insect farming is ''one of the many ways to address food and feed security," the food agency said.

''Insects are everywhere and they reproduce quickly," the agency said, adding they leave a ''low environmental footprint." They provide high-quality protein and nutrients when compared with meat and fish and are ''particularly important as a food supplement for undernourished children," it said.

The agency noted that its Edible Insect Program is also examining the potential of arachnids, such as spiders and scorpions, although they are not insects, strictly speaking.

University biologists have analyzed the nutritional value of edible insects, and some of them, such as certain beetles, ants, crickets and grasshoppers, come close to lean red meat or broiled fish in terms of protein per gram (ounce).

But are they tasty?

The report noted that some caterpillars in southern Africa and weaver ant eggs in Southeast Asia are considered delicacies and command high prices.

And some people who might not entertain the thought of consuming insects might already be eating them. Many insects are ingested inadvertently.