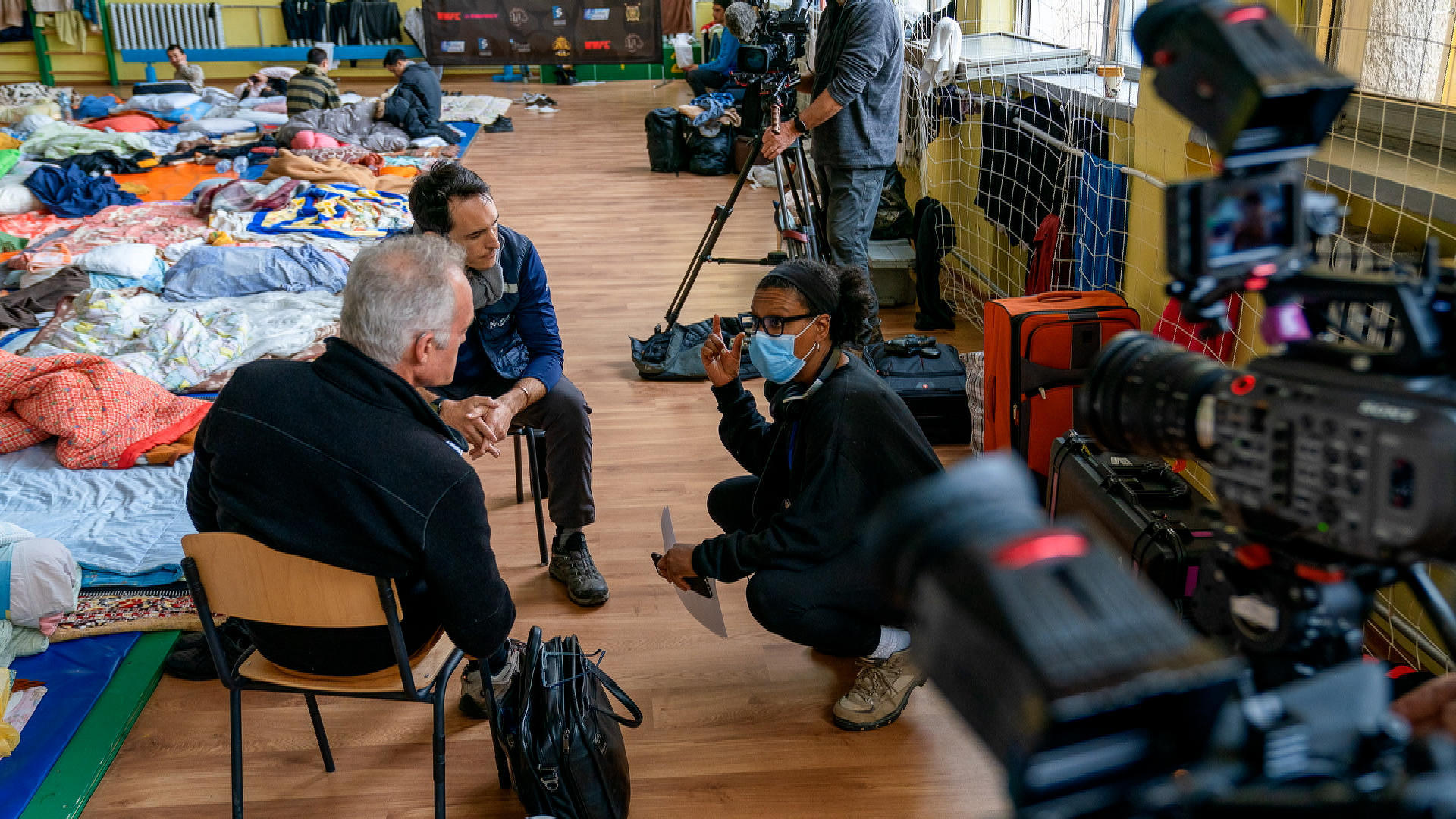 This week on 60 Minutes, correspondent Scott Pelley reported from the Lviv, Ukraine, where some half a million displaced Ukrainians have fled west to escape Russia's war in their hometowns. Because of its relative safety and its proximity to Poland, Lviv has also become a destination for those heading east into the conflict. The city has become a hub for journalists and humanitarian organizations waiting to deploy into besieged areas.

Still, Lviv has been a target for Russian attacks. Cruise missiles pounded the city just 36 hours before the 60 Minutes team arrived last week.

In the time 60 Minutes was on the ground in Lviv, air raid sirens went off four times. The team, including Pelley, producer Nicole Young and associate producer Kristin Steve, took cover in basements and bomb shelters alongside Ukrainians, who have become accustomed to the unsettling routine.

"You don't know how long it's going to take them to tell you that this situation is OK," Young said. "And it's just interesting that something like this, only weeks after this crisis has started, has become a normalcy in everybody's life."

One of those sirens went off as Pelley was interviewing Dr. John Roberts, an emergency response team lead for the International Medical Corps. In Lviv, Roberts has been distributing urgently needed medical supplies needed for basic care, including treating pregnant women, delivering babies, and performing surgery.

"People think 'war,' they think it's all gunshot wounds and bombs," Roberts said. "But when you don't have the health care system there, everything else that's not normally a problem all of a sudden becomes a problem. So for instance, something as simple as blood pressure medication, or medication for heart failure, or diabetes, getting your insulin, that goes away."

At the shelter where Roberts was helping patients, a woman named Larysa told Pelley her son, Dmytro, was still recovering from recent kidney surgery. Since the war began, Larysa said, recuperation had been difficult in the Kharkiv basement where they had taken cover. Fleeing to Lviv was its own challenge — the family had no food or water during the 19-hour train ride.

Now among the newly homeless sleeping on wooden pallets in a former basketball court, Larysa spoke of returning to the life she knew.

"We would like to go home. It's all destroyed. Our house is unharmed, but everything is destroyed. We'd even still go back home," Larysa said. "People think we want to wander or go to Poland or something — no. We love our own. We're patriots. We love our country, Ukraine."

The inside story of the Iranian attack on Al Asad Airbase
Thanks for reading CBS NEWS.
Create your free account or log in
for more features.
View CBS News In
CBS News App Open
Chrome Safari Continue
Be the first to know
Get browser notifications for breaking news, live events, and exclusive reporting.