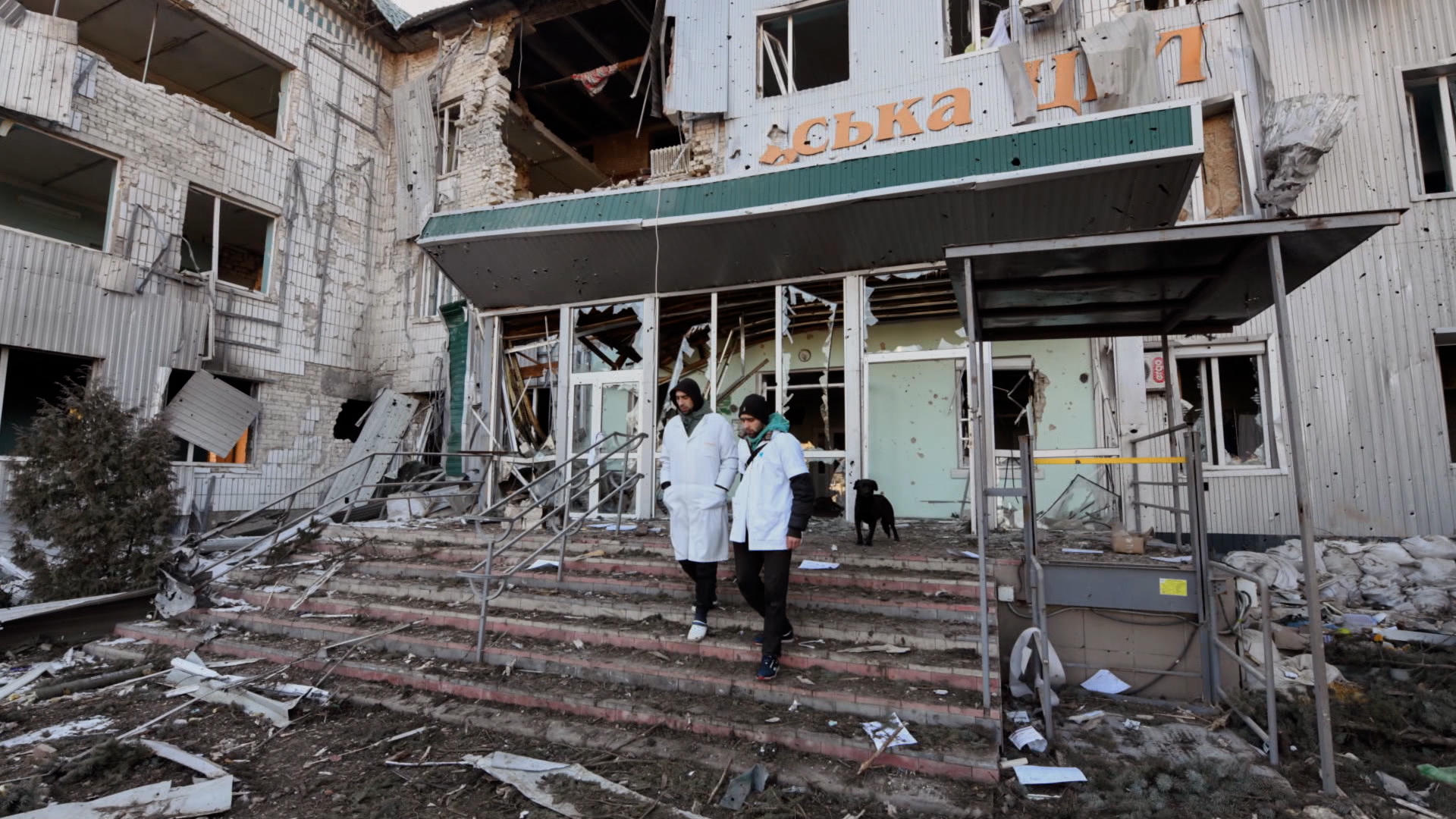 Tonight, the Russian army has abandoned its attempt to take Ukraine's capital city. Kyiv is still under air assault, but Russian ground troops are retreating from the suburbs after suffering grievous losses.

New images of liberated neighborhoods are scenes of ruin with evidence of many civilian deaths. A Pentagon source tells us the greatest battle now is for the coastal city of Mariupol. More than 100,000 civilians are trapped there. Also, Russian missiles have exploded in the major port city of Odesa. Russia expected Ukraine to fall in a matter of days. But now, after six weeks, the Russian military has failed to seize even one of its strategic objectives.

Eight days ago, Russian missiles exploded in Lviv—the western Ukrainian city nearest to Poland and NATO. The attack was perhaps a message to President Biden who was speaking in Poland that same hour. The name Lviv means "City of Lions." And this past week we traveled there to find a defiant people, braving airstrikes, rushing in medical supplies, and sheltering the innocent.

There was an attack on Lviv on March 26th. As Ukraine fought the inferno, Mr. Biden came to the end of a precisely crafted speech, then, ad libbed his disgust for Vladimir Putin.

President Biden in speech:  For God's sake, this man cannot remain in power.

Among diplomats, it was heresy. In the bomb shelters of Lviv, it was a prayer. The region, centered on this nearly 800-year-old city, has barricaded its monuments and opened its heart with shelter for half a million homeless Ukrainians.

Larysa, her son and daughter fled the city of Kharkiv on a 19-hour train with no food or water.

Ten million Ukrainians have fled Armageddon. Four million out of the country, 6 million compressed into Ukrainian cities. In the "City of Lions" you can spot the evacuation shelters by the cargo pallets outside. They're foundations for new homes. This is a basketball court, blanketed in donated bedding. The homeless, wrapped in compassion, rest on the lattice of the wooden pallets. The only place they have in the world measures 10 feet by three and a half.

The shelters are dank, with the faint, acrid smell of too many people in too small a space. The rules are implied. Keep quiet. Mind your pallet. Do not show fear to the children.

Food and medicine are in short supply. Their only wealth is time. Endless hours of worry broken by only by the sight of a new arrival or the wail of a siren.

Air raid warnings break up the day and send Ukrainians tapping for a new app they can't live without. Called "Air Alarm," it sets off the phone in an air raid and pinpoints where the bombs are falling. On this evacuation, we ran into Iryna. A woman who'd heard one siren too many.

"Why? Why are they wreaking this destruction? What did we do to them?" She said of the Russians.

We did see, in an image from the city of mariupol. A blood-stained baby blanket wrapped an 18-month-old boy. The mother follows her partner into a hospital. Her child, named Kirill, did not survive. We want to warn you that what you're about to see of this family is hard to watch, but this is Russia's war on civilians in Ukraine.

Dr. Jarno Habicht: We have seen, as of today, 72 attacks on health.

Dr. Jarno Habicht totals the atrocities as the head of the U.N.'s World Health Organization in Ukraine.

Scott Pelley: Seventy-one dead? Those include health care professionals and their patients?

Dr. Jarno Habicht: These are the health care workers, patients, those who have been in the facilities.

Scott Pelley: How frequently are these attacks on medical infrastructure happening?

Scott Pelley: From the Geneva Convention in 1864.

Scott Pelley: When a hospital is attacked, what is lost?

Dr. Jarno Habicht: You lose hope, because many people go to hospital because they want to get the care. And when hospitals are attacked, you don't have those places where you can actually get healed and be treated.

Scott Pelley: And that is the loss of hope?

In Ukraine today, hope must be imported. We found it in an abandoned factory where an American charity, the International Medical Corps, is distributing medical supplies.

Dr. John Roberts: Everything is broken down exactly how you'd see it, you know, in a pharmacy. For instance, amoxicillin, an antibiotic that's really, really useful.

Scott Pelley: And this would treat how many patients for how long?

Dr. John Roberts: So the IHK as a total kit can treat 10,000 people for three months.

Dr. John Roberts: We have brought in tons, and tons, and tons of medical supplies, surgical equipment, medications, bandages, everything that you would need to not only do primary health care, but also to do surgery, to birth babies, to take care of pregnant women.

Scott Pelley: With a country at war, how are the needs different?

Dr. John Roberts: People think "war," they think it's all gunshot wounds and bombs. But when you don't have the health care system there, everything else that's not normally a problem all of a sudden becomes a problem. So for instance something as simple as blood pressure medication, or medication for heart failure, or diabetes, getting your insulin, that goes away.

In the warehouse, we met two International Medical Corps—co-workers-- who recently fled burned-out apartment buildings in Mariupol. The Russians couldn't seize the southern port city so they bombed the 450,000 residents back to the Middle Ages. Violetta Voloshkina and Oleksandr Lapaiev escaped with the truth.

"Suddenly there was no gas at the gas stations," Lapaiev told us. "So, we couldn't go anywhere. Then, food started disappearing from the stores. And real hell broke loose - power was out, we couldn't charge our phones, the heat was gone. The worst thing was the explosions getting closer. The school was burning, some shops were on fire. Next to our apartment building there was an abandoned home. And that building really saved us, because we could go there, break the door frames and window frames, and use that to start fires."

Scott Pelley: What happened to the people you were with, in the bomb shelter?

Oleksandr Lapaiev (translated): There were about 50 of us in the basement-- no room to lie down, myself with my wife and daughter. There was no bathroom, no water, no light. One elderly lady suffered for two days, she shouted, she moaned. And imagine, it's 11 at night, it's dark, and she passes away.

He told us, four days later they escaped the basement. The body of the elderly woman was still by the door.

"When we were in the basement," Violetta told us, "We thought that only our place was being shelled, because planes were flying over us and dropping bombs. When we left the city, we saw the whole city was destroyed."

Scott Pelley: You gave us a picture of the basement shelter you were in. What was that like?

Violetta Voloshkina (translated): We had to cook on a fire. We didn't wash for two weeks because the water was only for drinking. We collected branches, made a fire and all cooked together. All the people brought everything they had. Naturally, we cooked all the meat first because it would spoil.

Scott Pelley: Your daughter turned 17 years old during this invasion and I wonder if you think she has a future in Ukraine?

"Everything I own fits in a single suitcase," Oleksander told us. "I don't know, honestly, how a child is supposed to carry on."

Scott Pelley: The Russians claim they are liberating the Ukrainian people.

Violetta Voloshkina (translated): We didn't ask anyone to liberate us. We lived peacefully in our city. We lived our lives. We went to work, and everything was fine, we had a happy life. Someone started a war, and someone ruined our lives.

Lviv has known many invasions over eight centuries. Here, just going about the day is an act of defiance. On the coffee shop door, we couldn't help but notice the sign that keeps a daily tally of Russian soldiers killed and planes and tanks and ships destroyed. The numbers are frothy but, inside, where ID's are checked to keep Russians out, they're serving up courage.

In the shelters, Dr. John Roberts is looking at the long haul, counting up the shortages.

Dr. John Roberts: We try and formulate exactly what they need, and fill that need in the best way possible. So we bring in tons of medications--

Once again, Lviv took cover. During our visit, the United Nations appointed a commission to investigate war crimes--that will be for the future. For now, in the shelters of the "City of Lions" they pray their light endures the darkness.