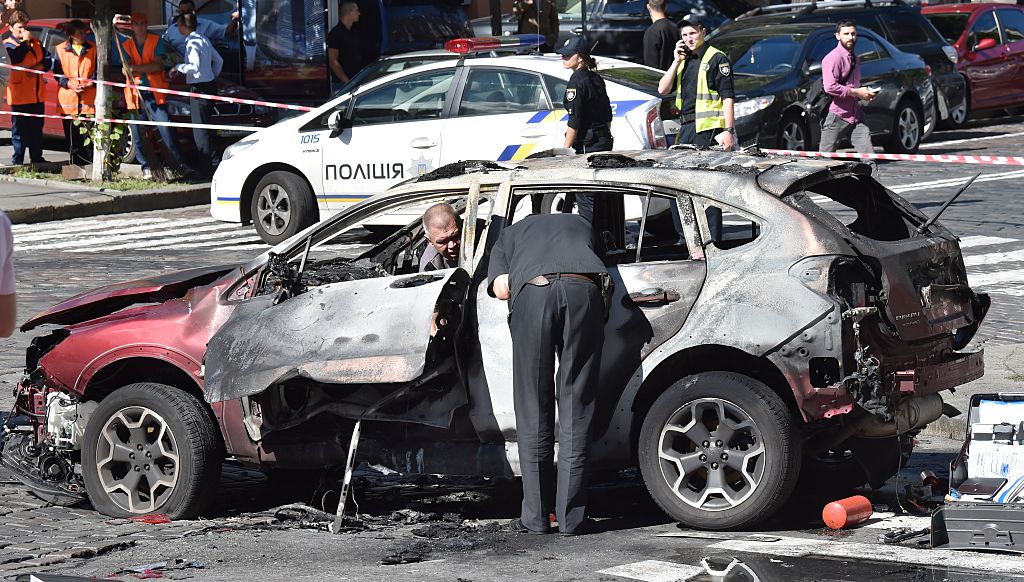 MOSCOW -- A prominent journalist was killed in a car bombing in Ukraine's capital, Kiev, on Wednesday, sending shockwaves through the Ukrainian journalist community that was shaped by the gruesome killing of the publication's founder 16 years ago.

The country's top online news website Ukrainska Pravda said its journalist Pavel Sheremet died in an explosion early on Wednesday as he got into his car to drive to work to anchor a talk show on a local radio station.

The publication said the car was owned by its editor-in-chief Olena Prytula. Images from the scene showed the charred car stranded in the middle of a cobbled street.

Zoryan Shkiryak, adviser to the Ukrainian interior minister, said in a Facebook post that an improvised explosive device was planted underneath the car. Shkiryak said the device was either a delayed-action bomb or was remotely operated. It's believed to have contained up to the equivalent of 600 grams of TNT.

Interior Minister Khatiya Dekanoidze said in televised comments at the scene of the crime that she will personally supervise the investigation.

"We are looking at all theories," she said, adding that solving the murder is "very important, a matter of honor" for the Kiev police.

Russia's Novaya Gazeta quoted several friends and family of Sheremet and his partner Prytula saying that they had complained about being followed.

Ukraine's media community was deeply affected by the brutal slaying of Ukrainska Pravda founder Heorhiy Gongadze in 2000. Thirteen years later, an Interior Ministry official was convicted for the killing but the probe never formally determined who ordered it. Rights groups accused Ukraine's then-president of involvement in the murder based on tape recordings made by the president's bodyguard.

Current President Petro Poroshenko offered his condolences to Sheremet's friends and family and said he has instructed law-enforcement agencies to conduct "a speedy investigation into this crime."

The 44-year old Belarusian-born journalist irked officials in Belarus and Russia before he moved to Ukraine, where he said there were fewer hurdles to independent reporting.

In 1997, Belarus convicted Sheremet of illegally crossing its border and sentenced him to three years in prison for his investigation on the porous border between Belarus and Lithuania. He served three months in prison before he was released. Sheremet faced threats and harassment in Belarus and was badly beaten in 2004 while covering an election. Several years later he moved to Russia to work in television.

In a media landscape sanitized by the authoritarian Belarusian government, Sheremet -- while living abroad -- founded Belaruspartisan.org which went on to become one of the country's leading independent news websites. He moved to Ukraine in 2014 after what he said was pressure from his Russian television bosses over the reporting of ongoing opposition protests in Kiev.

Outpourings of grief came Wednesday morning from politicians and journalists in all three countries.

In Moscow, prominent journalist Konstantin von Eggert in an obituary posted on the website of the Dozhd TV channel described Sheremet as a "pioneer of investigative reporting."

"His famous report about the 'illegal crossing' of the Belarusian border was a major television sensation of the 1990s," Eggert said. "It was the time when a journalist tried a thing out himself and had to pay for it, facing charges in his own country."

The Organization for Security and Cooperation in Europe in a statement on Wednesday condemned the killing and called on Ukrainian authorities to conduct a thorough investigation and bring the perpetrators to justice.

Sheremet is survived by a son and a daughter who live in Minsk, where Sheremet will be buried.