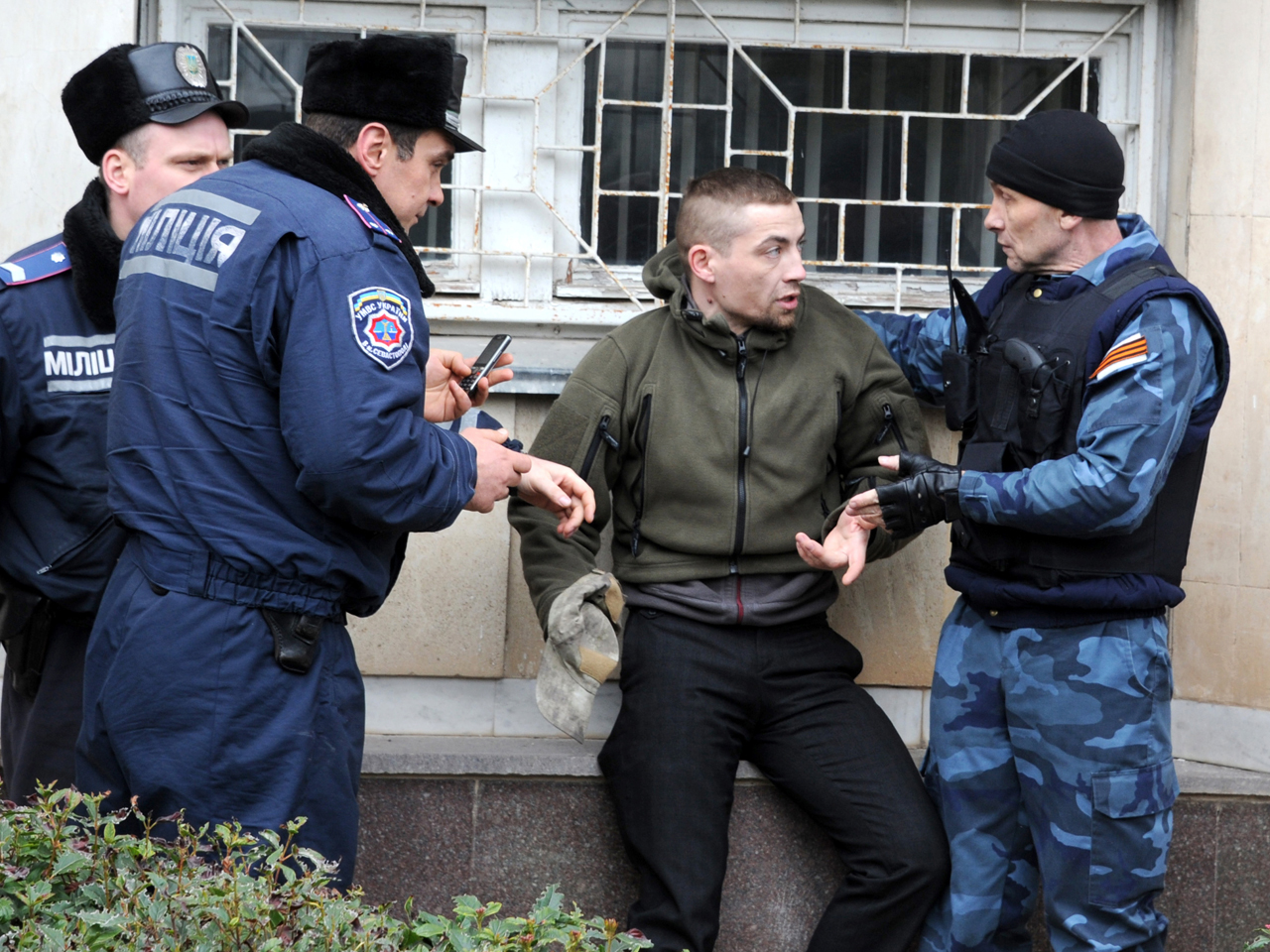 SIMFEROPOL, Ukraine - Russian forces tightened their grip on Crimea on Sunday despite a U.S. warning to Moscow that annexing the southern Ukrainian region would close the door to diplomacy in a tense East-West standoff.

He said by telephone that the Chernomorskoye base on the western edge of the Back Sea peninsula had been taken over without bloodshed at around six a.m. (0400 GMT).

At the same time, dozens of military trucks transporting heavily armed soldiers rumbled over Crimea's rutted roads Saturday as Russia reinforced its armed presence. Moscow's foreign minister ruled out any dialogue with Ukraine's new authorities, whom he dismissed as the puppets of extremists.

The Russians have denied their armed forces are active in Crimea, but an Associated Press reporter trailed one military convoy Saturday afternoon from 25 miles west of Feodosia to a military airfield at Gvardeiskoe north of Simferopol, over which a Russian flag flew.

Some of the army green vehicles had Russian license plates and numbers indicating that they were from the Moscow region. Some towed mobile kitchens and what appeared to be mobile medical equipment.

Russian forces' seizure of the Black Sea peninsula has been bloodless but tensions are mounting following the decision by pro-Russian groups that have taken over the regional parliament to make Crimea part of Russia.

The operation to seize Crimea began within days of Ukraine's pro-Russian President Viktor Yanukovich's flight from the country last month. Yanukovich was toppled after three months of demonstrations against a decision to spurn a free trade deal with the European Union for closer ties with Russia.

About 300 opponents of Russian-backed plans for Crimea to secede gathered around a monument to national hero Taras Shevchenko, carrying blue and yellow balloons the color of the Ukrainian flag. The crowd sang the national anthem, twice, and an Orthodox Priest led prayers and a hymn.

Around 2,000 Russian supporters gathered in Lenin Square, where there is a statue of the Soviet state founder, clapping along to nostalgic Soviet era songs being sung from the stage.

Alexander Liganov, 25 and jobless, said: "We have always been Russian, not Ukrainian. We support Putin."

President Vladimir Putin declared a week ago that Russia had the right to invade Ukraine to protect Russian citizens, and his parliament has voted to change the law to make it easier to annex territory inhabited by Russian speakers.

At a rally in the eastern city of Donetsk, home to many Russian speakers, presidential candidate Vitaly Klitschko, a former boxing champion, said Ukraine should not allowed to split apart amid bloodshed.

"The main task is to preserve the stability and independence of our country," he said.

The worst face-off with Moscow since the Cold War has left the West scrambling for a response, especially since the region's pro-Russia leadership declared Crimea part of Russia last week and announced a March 16 referendum to confirm it.

U.S. Secretary of State John Kerry, speaking to Russia's foreign minister for the fourth day in a row, told Sergei Lavrov on Saturday that Russia should exercise restraint.

"He made clear that continued military escalation and provocation in Crimea or elsewhere in Ukraine, along with steps to annex Crimea to Russia, would close any available space for diplomacy, and he urged utmost restraint," a U.S. official said.

President Barack Obama spoke by phone on Saturday to the leaders of France, Britain and Italy and three ex-Soviet Baltic states that have joined NATO. He assured Latvia, Lithuania and Estonia, which have their own ethnic Russian populations, that the Western military alliance would protect them if necessary.

A spokeswoman for the Organization for Security and Cooperation in Europe said military monitors from the pan-Europe watchdog had on Saturday been prevented for the third time in as many days from entering Crimea.

Shots were fired on Saturday to turn back the mission of more than 40 unarmed observers, who have been invited by Kiev but lack permission from Crimea's pro-Russian authorities to cross the isthmus to the peninsula. No on was hurt.

Crimea's pro-Moscow authorities have ordered all remaining Ukrainian troop detachments in the province to disarm and surrender, but at several locations they have refused to yield.

Moscow denies that the Russian-speaking troops in Crimea are under its command, an assertion Washington dismisses as "Putin's fiction". Although they wear no insignia, the troops drive vehicles with Russian military plates.

A Reuters reporting team filmed a convoy of hundreds of Russian troops in about 50 trucks, accompanied by armored vehicles and ambulances, which pulled into a military base north of Simferopol in broad daylight on Saturday.

The military standoff has remained bloodless, but troops on both sides spoke of increased agitation.

"The situation is changed. Tensions are much higher now. You have to go. You can't film here," said a Russian soldier carrying a heavy machine gun, his face covered except for his eyes, at a Ukrainian navy base in Novoozernoye.

A source in Ukraine's defense ministry said it was mobilizing some of its military hardware for a planned exercise, Interfax news agency reported. Ukraine's military, with barely 130,000 troops, would be no match for Russia's. So far Kiev has held back from any action that might provoke a response.

Polish Foreign Minister Radoslaw Sikorski said on Saturday Poland had evacuated its consulate in Sevastopol due to "continuing disturbances by Russian forces".

The United States has announced sanctions against individuals it accuses of interfering with Ukrainian territorial integrity, although it has yet to publish the list. Washington has threatened wider action to isolate the Russian economy.

The European Union is also considering sanctions, but has so far been more cautious. Any action would be much harder to organize for a 28-nation bloc that takes decisions unanimously and many of whose members depend on Russian natural gas.

Pro-Moscow Crimea leader Sergei Aksyonov said the referendum on union with Russia - due in a week - would not be stopped. It had been called so quickly to avert "provocation", he said.

It is far from clear whether most of the 2 million Crimea residents want to be ruled by Moscow. When last asked in 1991, they voted narrowly for independence along with the rest of Ukraine.

Western countries dismiss the planned referendum as illegal and likely to be falsified.