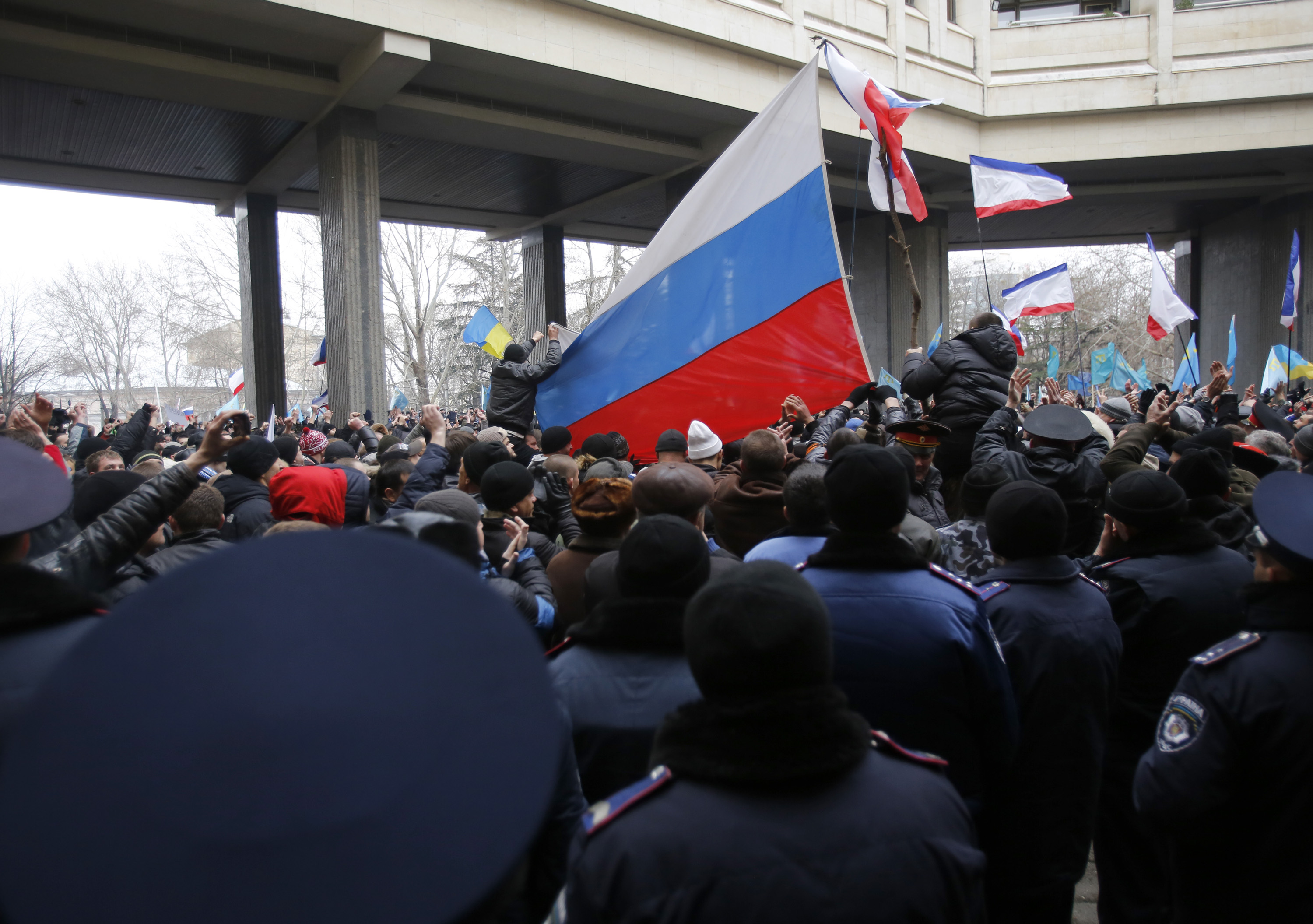 "In connection with the appeal by president Yanukovich for his personal security to be guaranteed, I report that the request has been granted on the territory of the Russian Federation," the source was quoted as saying by Interfax news agency.

The report appeared to confirm rumors that the Ukrainian leader had fled his own nation and reached Russian soil.

Russian news agency ITAR-TASS, meanwhile, quoted the statement allegedly from Yanukovich himself, in which he asked for Russia to protect him from the "extremists" who forced him to flee his post and the Ukrainian capital of Kiev over the weekend.

A respected Russian news organization reported that the fugitive Ukrainian president had been seen in a Moscow hotel and was now staying in a Kremlin sanatorium just outside the city.

The RBK report was impossible to confirm, but security at the Ukraina Hotel was unusually heavy late Wednesday, with police watching from parked vehicles outside and guards posted throughout the lobby. Some of Yanukovich's allies were also reported to have been at the hotel.

Yanukovich has not been seen publicly since Saturday, when he was spotted in the eastern Ukrainian region of Crimea, bordering Russia, where he still enjoys significant support. While the West has recognized the new Ukrainian government, whose forces drove Yanukovich from power, Russia still considers him the legitimate president. In the statement he reportedly made on Thursday he asserted the same, that he remained the rightful leader of the Ukraine.

RBK reported Wednesday evening that Yanukovich was staying at the Barvikha sanatorium, which is run by the presidential administration's property department. The spokesman for this department, Viktor Khrekov, told The Associated Press on Thursday that he has no information about this.

The news about Yanukovich came as Ukraine put its police on high alert after dozens of armed pro-Russia men stormed and seized local government buildings in the eastern Crimea region and raised a Russian flag over a barricade.

The renewed tension in this strategic peninsula that houses Russia's Black Sea fleet came as lawmakers in Kiev were expected to approve the new government, but also a day after clashes between pro- and anti-Russian demonstrators in Crimea's regional capital, Simferopol.

The men occupying the local parliament building did not immediately voice any demands but threw a flash grenade in response to a journalist's questions. They wore black and orange ribbons, a Russian symbol of the victory in World War II, and put up a sign saying "Crimea is Russia."

Ukraine's acting president appealed for calm after the buildings were seized, by what he called "criminals in military fatigues."

Fistfights broke out Wednesday outside the legislature's building in Simferopol between pro- and anti-Russian demonstrators. Russian President Vladimir Putin, meanwhile, put combat troops on high alert Wednesday for war games near the Ukrainian boarder -- the Kremlin's boldest gesture after days of sabre rattling since its ally Yanukovich was toppled.

Moscow said about 150,000 troops would take part in exercises in the Western military district that borders Ukraine, although it denied that the previously unannounced war games were linked to the Ukrainian crisis.

Moscow denounced what it described as the rise of "nationalist and neo-fascist sentiment" in Ukraine's mainly Ukrainian-speaking west, where it said Russian speakers were being deprived of rights.

On Thursday, the Russian Defense Ministry said fighter jets along the country's border with Ukraine had been put on combat alert, according to the Interfax news agency.

"Constant air patrols are being carried out by fighter jets in the border regions," Interfax quoted a ministry statement as saying. "From the moment they received the signal to be on high alert, the air force in the western military region left for the ... air bases."

Secretary of State John Kerry said late Wednesday it would be a grave mistake for Russia to send troops into neighboring Ukraine.
In Kiev, opposition leaders who took charge after Yanukovich fled were working on forming a new government to chart a path forward for the country and its ailing economy. The parliament approved Arseniy Yatsenyuk Thursday as the nation's new prime minister.

Opposition leaders chose Independence Square -- the center of the revolution -- to introduce the country's new government Wednesday. The introductions prompted booing from some opposition supporters in the square.

Parliament must ratify the new ministers Thursday, but CBS News correspondent Clarissa Ward reported that for some in the crowd, there were too many familiar faces from the Yanukovich days on stage.

Russia has repeatedly expressed concern for the safety of Russian citizens in Ukraine, using language similar to statements that preceded its invasion of Georgia in 2008.

Since Yanukovich's downfall on Saturday, all eyes have been on Putin, who ordered the invasion of Georgia to protect two self-declared independent regions with many ethnic Russians and others holding Russian passports. Moscow recognized the regions as independent states, using armed force effectively to seize control of territory from its neighbor.

Any military action in Ukraine, a country of 46 million people that has close ties with European powers and the United States, would be far more serious -- the closest the West and Russia have come to outright confrontation since the Cold War.

12 civilians dead as Russia shells eastern Ukraine: "Every crime will be punished"