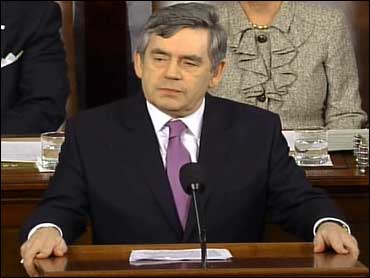 In a formal address to a Joint Meeting of Congress, Brown said that U.S.-European relations were at an all-time high and that the two nations must seize on the opportunity to bring about change. He warned that protectionism ultimately makes every nation vulnerable because "a bad bank anywhere is a threat to good banks everywhere."

"No matter where it starts, an economic crisis does not stop at the water's edge," he said told lawmakers gathered in the cavernous House chamber. "It ripples across the world," declared Brown, whose speech was applauded on several occasions.

The prime minister was facing a U.S. Congress deeply divided on how to solve America's economic crisis, with Republicans sparring with President Barack Obama on whether more government intervention and money can salvage financial markets.

His remarks come as he is looking for a boost to his own political fortunes. In hard political times at home, he hopes to benefit from Britons' high regard for President Barack Obama and to demonstrate British leadership at a time of economic uncertainty.

Brown took a swipe at Bush's defense secretary, Donald Rumsfeld, who once scoffed at European critics of the war, branding them "Old Europe."

"There is no old Europe, no new Europe," Brown declared. "There is only your friend Europe."

In light of this renewed relationship, Brown said the U.S. and Britain should work together to reduce interest rates worldwide and help emerging markets rebuild their banks. He said the international community must also agree to new standards for the banking system that would improve accountability and transparency.

"Just think how each of our actions, if combined, could mean a whole much greater than the sum of the parts," he said.

Brown was laying the groundwork for a G-20 economic summit of advanced and developing nations meeting in London next month. The summit, which Brown is chairing, is critical for improving global economic confidence as well as Brown's political prospects.

Brown has been falling significantly behind the conservative opposition in British opinion polls. Supporters hope an appearance with Obama and a leading role in next month's economic summit will change his fortunes.

In tackling the protectionist issue, the British leader seeks to present himself as a plain-speaking friend, not reluctant to question his trans-Atlantic ally like predecessor Tony Blair, whom critics dubbed Bush's poodle.

Brown met privately with Obama on Tuesday. The two were said to have discussed the economic meltdown, as well as the war in Afghanistan, Iran's nuclear program, global warming and other topics.

Britain has invested billions to bail out banks and boost the country's economy, while Obama has had a $787 billion economic stimulus bill passed in the United States.