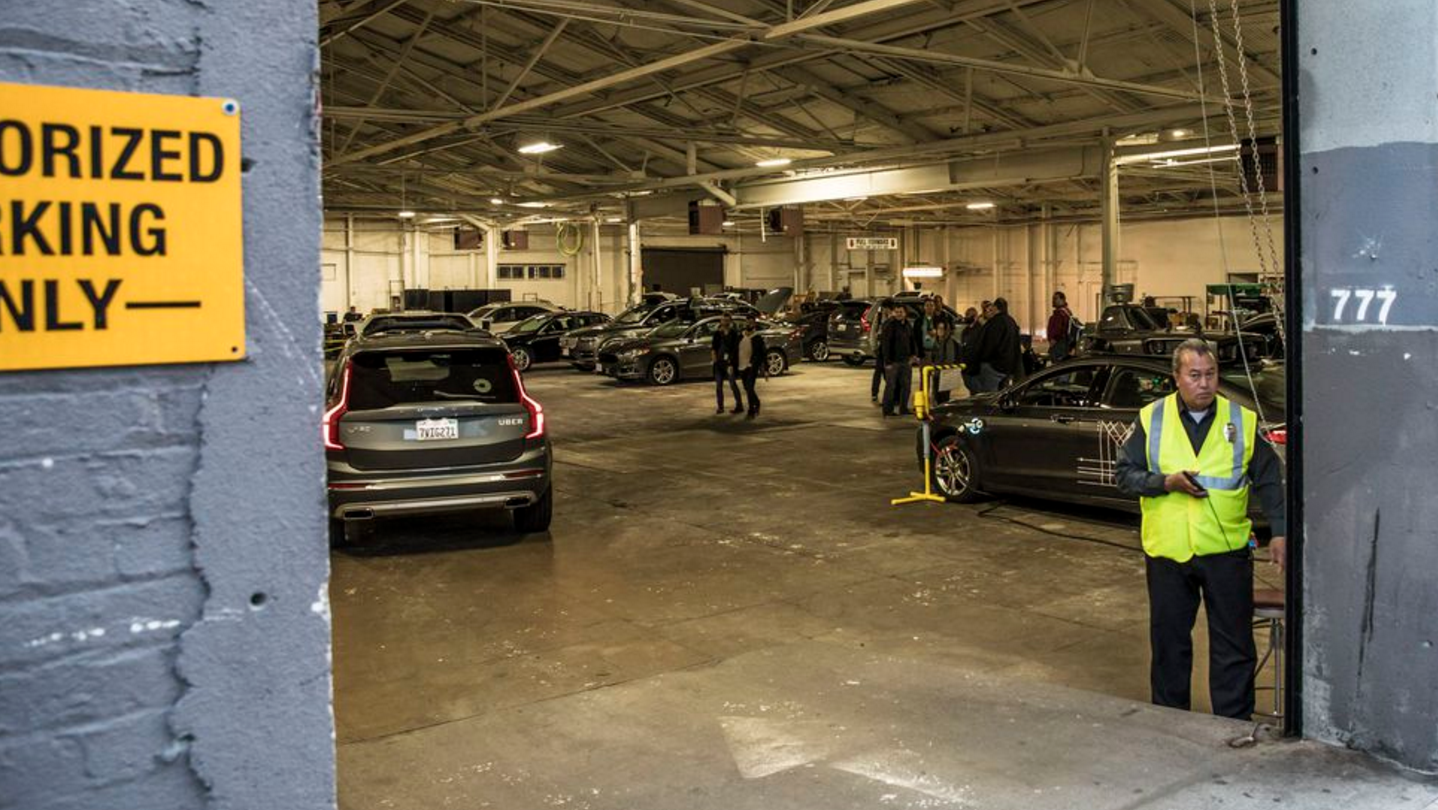 On a nondescript street in downtown San Francisco, an unremarkable parking garage with dusty walls and painted-over windows seems like an abandoned warehouse.

Inside, however, it’s a very different scene.

Row upon row of shiny self-driving cars await their moment. At first glance, they look like regular dark-gray Volvo SUVs and white Ford sedans. But they’re decked out with rectangular sci-fi contraptions on their roofs. The Uber logo is emblazoned across their doors.

The garage is where the ride-hailing service houses a fleet of autonomous cars for San Francisco. The company hasn’t said anything about when the self-driving cars will hit the road in California, but passengers in the city can expect to dial up one of these futuristic Uber cars “very soon,” according to a person familiar with the launch. Uber plans to let San Francisco customers begin using the technology and get accustomed to it in the very near future, the person said.

Uber made its name by pairing passengers with drivers via a phone app. Over the past six years, it’s grown from small startup to multinational company with operations in more than 400 cities in 72 countries. Now, Uber is going a step further, venturing into robotics and artificial intelligence with autonomous vehicles. Some of its self-driving cars are already in service in Pennsylvania.

“We’re at the very beginning stages of becoming a robotics company,” Uber CEO Travis Kalanick said at the Vanity Fair Summit in San Francisco in October. “As we move toward the future, autonomy is a pretty critical thing for us. It’s existential.”

Uber’s self-driving cars, accompanied by a human driver, have been rolling the streets of San Francisco for the last three to four months. The company has said the cars are being used solely to collect data for maps. Mapping streets is part of readying autonomous vehicles for the open road, so they can identify routes and learn to detect obstacles.

Stargazers Glimpse A Bit Of Heaven

Uber isn’t saying when it’s going to roll out its self-driving cars to passengers in San Francisco. The company declined to comment for this story.

As of September, Uber didn’t have a permit to run autonomous cars in California. It’s unclear if the Department of Motor Vehicles has since given the company a permit. The DMV didn’t return requests for comment.

So far, Uber’s self-driving cars are available in only one U.S. city -- Pittsburgh. After 18 months of testing, the company launched a small fleet of autonomous vehicles in September in the city. Now when riders hail an Uber there, they have a chance of being picked up in a self-driving car that’s accompanied by a “safety driver.” Uber said it plans to have 100 self-driving cars in Pittsburgh by the end of the year.

Interest and research in autonomous vehicles is a hot topic in the auto and tech industries. Automakers from Toyota to Ford to Volvo all have projects under way, and Silicon Valley giants like Google, Intel, Tesla Motors and Apple are also betting on the tech.

But self-driving cars could mean saying goodbye to drivers, who use their own cars to give Uber rides. While those drivers are important to the company’s business model today, they have often caused headaches for Kalanick and his team. Some drivers have joined class action lawsuits demanding to be classified as employees, rather than independent contractors, and other drivers have protested against the company, demanding better pay and support.

Uber has said it doesn’t plan to phase out drivers anytime soon. But with the company on the verge of launching a fleet of self-driving cars in San Francisco, that could change.

The scene down at Uber’s garage is a busy one. A dozen Uber-branded autonomous vehicles line the street with their rooftop gear whirling away. Other self-driving cars, accompanied by a human or two, slowly roll in and out of the building.

Bahaddine, a full-time Uber driver not involved in the autonomous vehicle project who asked to be identified by just his first name, said Uber told drivers about its plans to launch self-driving Fords and Volvos in San Francisco. He’s not too concerned, however, that robot cars will take his job.