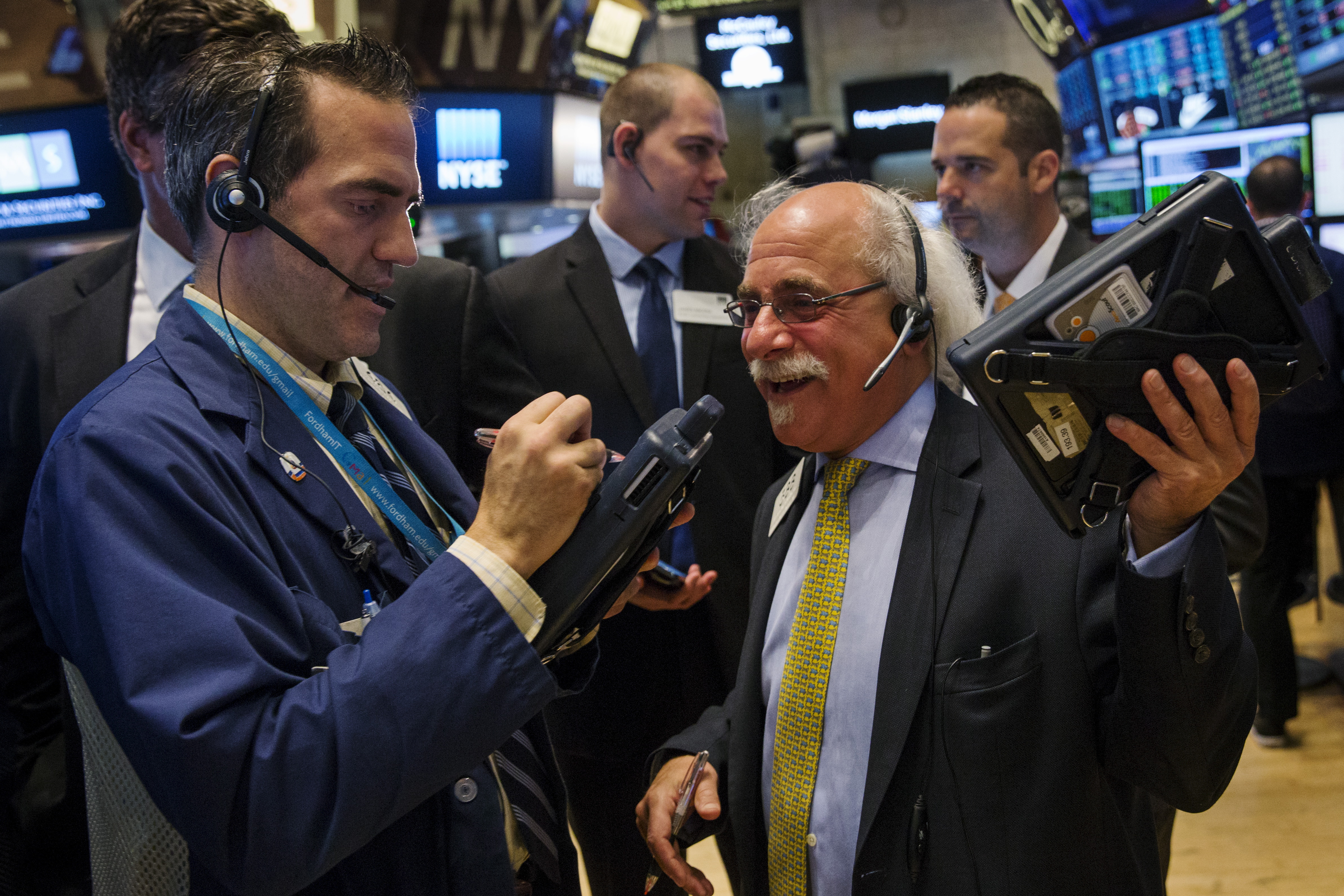 Unlike yesterday, when strong early gains evaporated in the final hour of trading, markets pushed higher into the finishing bell.

"There's a lot of cash on the sidelines waiting to get in, so to the extent that there's any sort of bottom seen, that will increase people's confidence and boldness," said Erik Davidson, chief investment officer for Wells Fargo Private Bank.

The surge ended what had been the longest slide in more than three years. Over that time, the Dow lost 1,900 points over that period, while the slump wiped more than $2 trillion off the value of S&P 500 companies.

Overseas investors were less bullish despite a move by China's central bank to cut interest rates and ease reserve requirements for banks. Most global markets slipped back amid ongoing concerns about economic growth in the world's second-largest economy.

China's benchmark Shanghai Composite Index slumped late in the day, retreating 1.3 percent after swinging between gains and losses. That followed a sharp 7.6 percent decline on Tuesday and an 8.5 percent loss the previous day. Stocks in Japan, South Korea and Australia gained.

Since June, China's Shanghai and Shenzhen stock markets have each fallen roughly 15 percent, although both indices remain up roughly 33 percent and 43 percent this year, respectively.

U.S. stocks are officially in correction, meaning down at least 10 percent from the highs they hit in spring. The S&P 500 has fallen 11 percent over the five last sessions alone.

Concerns about slowing global economic growth and the turbulence in financial markets is fueling speculation that the Federal Reserve will push back its timetable for raising interest rates. Many forecasters had previously predicted that the central bank would move to hike rates for the first time since 2006 at its Sept. 16-17 policy meeting.

Although the U.S. economy has picked up speed in recent months following a weak first half, with the job and housing markets registering solid gains, overall growth has disappointed. Many economists expect America's gross domestic product -- the total value of goods and services produced in the same year -- to end the year well below 3 percent.

That modest expansion, coupled with anxious global investors, could be enough to convince Fed policymakers to delay a "liftoff" in rates.

For now, most market watchers are advising investors not to panic, while noting that questions about China and uncertainty over interest rates is likely to keep a lid on equities.

"We think China's slowdown stays controlled," Deutsche Bank analysts said in a note ahead of the opening bell on Wednesday. "It's rather countries and companies that sell things to China that worry us the most. Until China and global growth outlooks are clearer, and how the Fed fits into the picture, we think stocks stay below prior highs."

For investors and the broader U.S. economy, the wild card is if the controlled descent Chinese policymakers are trying to engineer for the country's economy veers off course.

That would deliver a serious blow to global economic growth, undercutting trade between Asia and other regions, while also sapping the confidence of businesses around the world that have come to rely on buoyant growth in China.

"Despite strong domestic fundamentals, the U.S. economy would not be immune to a China hard landing scenario and its broader global consequences," Howarth said in a client note.