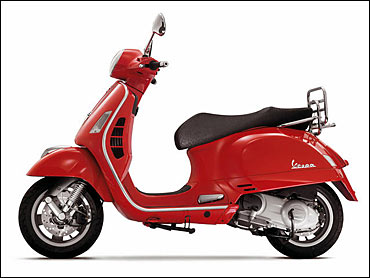 Interest in scooters has been increasing as the pain at the pump has been intensifying, dealers report, as people looking to save on gas in turn cut down on the number of wheels under them!

And on The Early Show Saturday, =http://www.menshealth.com/cda/homepage.do >Men's Health magazine's Matt Bean showcased several of the latest and coolest ones.

They're all ultra-fuel efficient. Two don't even use gas at all!

Vespa S:
The vehicle gets a maximum speed of 59 miles per hour and can get 72 miles per gallon. The tank holds 2.3 gallons, so this equals out to about 165 miles per tank. With gas currently at an average of $4.10 per gallon, you can fill up the gas tank for only $9.43.The Vespa S features a single-cylinder engine, front-disk brakes, and weighs 243 pounds. It comes in three colors: red, white, and black. The suggested retail price for the Vespa S is $4,199.

Piaggio MP3 400 (three-wheeled scooter)
The three-wheeled scooter gets a maximum speed of 88 miles per hour, and reviews say that it can get around 60 miles per gallon. The tank holds 3.2 gallons, so this equals out to about 192 miles per tank. With gas currently averaging $4.10 per gallon, you can fill up the MP3 400's tank for about $13.12. The Piaggio MP3 400 features a single-cylinder engine, electronic fuel injection, and weighs 538 pounds. It also has a large, under-seat storage area, and it supposedly handles very well un uneven surfaces like brick or cobblestone streets. It comes in three colors: grey, black and blue. The suggested price for the Piaggio MP3 400 is $8,699.

Vectrix electric scooter
The zero-emission, all electric scooter gets a maximum speed of 62 miles per hour. It can go zero to fifty in 6.8 seconds. This is the only highway-legal electric scooter on the market. It costs about a penny per mile to operate. In comparison, if the Vectrix ran on gas it could get about 367 miles per gallon. You charge the Vectrix by plugging it into any standard 110 volt outlet, and it takes three to five hours to charge. Once fully charged, you can ride the scooter for up to 55 miles. The Vectrix has front and rear-disk brakes and a twisting throttle to accelerate. It weighs just over 500 pounds. The battery can last up to 10 years or 50,000 miles. The Vectrix comes in four colors: red, blue, silver, and green. The suggested price for the Vectrix is $8,700.

Segway i2
The zero-emission, electric personal transporter gets a maximum speed of 12.5 miles per hour. It can run for up to 24 miles or 480 city blocks on a single charge. It weighs 105 pounds. The Segway i2 has a "LeanSteer" feature that allows the rider to "drive" the scooter by leaning forward, backward, or into and out of turns. It comes in three colors: black, white, and sage green. On this verseion, you used to have to twist a grip... now you just have to learn. They are expecting sales to jump by 50% because of the gas crisis. The suggested for the Segway i2 is $5,000.
MMVIII, CBS Interactive Inc. All Rights Reserved