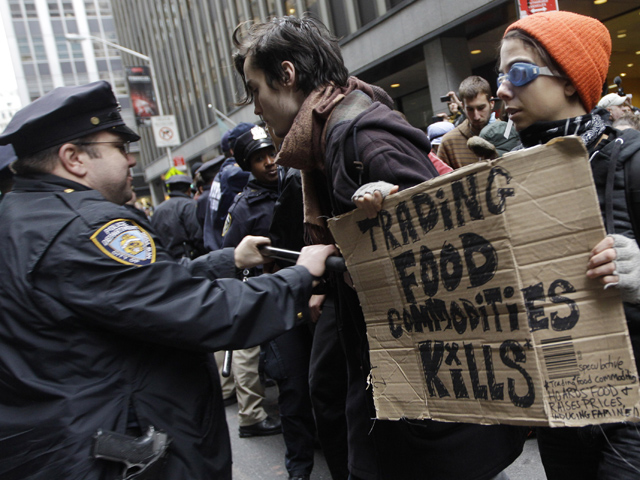 NEW YORK - Everywhere, it seems, people want to weigh in about the Occupy Wall Street protests around the country, from CEOs and politicians to your next-door neighbor. So far the talk has translated into little action.

Two months into the movement, with police dismantling the encampments one by one, city by city, few politicians or policymakers have publicly taken up the protesters' cause or done anything to address corporate excesses and economic inequality.

On Thursday, hundreds of Occupy demonstrators marched through New York's financial district in an attempt to block traders from reaching the New York Stock Exchange, promising a national day of action with mass gatherings in other cities. The action came two days after authorities cleared their encampment that sparked the global protest movement against economic inequality and greed.

"All day, all week, shut down Wall Street!" the crowd chanted, clogging the streets as they neared the stock exchange.

Police said at least 175 people were arrested, including several who sat on the ground one block from Wall Street, refusing to move.

The protest did not delay the opening of the New York Stock Exchange or disrupt business, said Rich Adamonis, a spokesman for the exchange.

But some political observers say the demonstrators have changed the conversation in the U.S., and that is a big first step.

"They've shifted the center of gravity of the debate so that the whole question of wealth and privilege is now being discussed," said William Galston, a senior fellow at the Brookings Institution, the Washington political think tank. "In a democracy, what people are talking about matters."

Georgia state Sen. Vincent Fort, a Democrat who was among those arrested when protesters were expelled from an Atlanta park last month, said he is not troubled by the absence of any major tangible change.

"The Occupy movement is a relative baby. It's just a few months old," he said. "The most important thing it has done is to change the conversation in this country. You can't have any policy change, you can't have any legislative change, until the debate is changed."

Examples of real, measurable Occupy-inspired change in the political sphere are hard to come by.

In Rhode Island, Democratic Sen. Sheldon Whitehouse noted that Occupy activists encouraged customers to fight back recently against fees imposed by major banks -- a fight that ended with Bank of America and its competitors backing down. Whitehouse is trying to channel the anger that has bubbled up in the Occupy movement against big banks as he seeks support for a bill to crack down on credit card interest rates.

Union leaders say the Occupy movement has also brought a spark of optimism and energy to organized labor after a summer of setbacks and assaults on their bargaining power.

"The Occupy movement has framed the fight," said Mary Kay Henry, president of the Service Employees International Union. "They've totally changed the debate within a 30-day period." She added: "It has impacted expectations among people who were beaten down."

In fact, labor leaders insist the Occupy movement's message of economic inequality was a factor earlier this month in Ohio, where voters overwhelmingly repealed a law curtailing public employees' right to collective bargaining.

But political experts are skeptical of that claim.

"That's a stretch," said Paul Beck, a political science professor at the Ohio State University in Columbus. "The sentiment of Ohioans on that bill very much precedes any of the Occupy Wall Street activities and their spinoffs in various cities."

As for why the protesters have yet to turn the conversation into major action, some political observers said the movement has never really clarified its policy objectives and is hampered by a lack of clear-cut leadership.

Kalle Lasn, co-founder of Adbusters, the Canadian magazine that helped ignite the Occupy Wall Street movement by issuing the initial call for the demonstration last spring, said the "original magic" faded somewhat as news coverage of the encampments around the country began to focus less on the participants' youthful idealism and more on drugs, violence and homelessness.

"Somehow, we lost the high ground, we lost the narrative," he said. "Tactically, the moment was right to declare victory, have a big global party and come back swinging next spring."

Where does the movement go from here, especially now that police cleared out its unofficial headquarters, Zuccotti Park in New York City?

The New York group announced it would rally near the New York Stock Exchange, then fan out across Manhattan and head to subways, before gathering downtown and marching over the Brooklyn Bridge.

A past attempt to march across the bridge drew the first significant international attention to the Occupy movement when more than 700 people were arrested.

"This thing has gone so far and reflects such intense feeling that I don't think there's any chance at all that we just saw it end," said Todd Gitlin, a Columbia University authority on the student left during the 1960s.

Whether the Occupy movement will achieve real change, he said, may depend on whether the demonstrators and their sympathizers decide to bargain with the Democrats to achieve some of their agenda.

Florida state Rep. Dwight Bullard, a Miami Democrat who has met with organizers in Florida, said he and other lawmakers are listening to the protesters and taking up their cause on such issues as debit card fees.

"I would definitely say that Occupy has encouraged or helped ignite, I guess, a more aggressive fervor in the bellies of my colleagues," Bullard said. "Sometimes you don't want to jump out of the plane without a parachute," and it is nice to know "there are people not only around the state but around the country and around the globe that are tired of being beat down and taken advantage of by corporate interests."