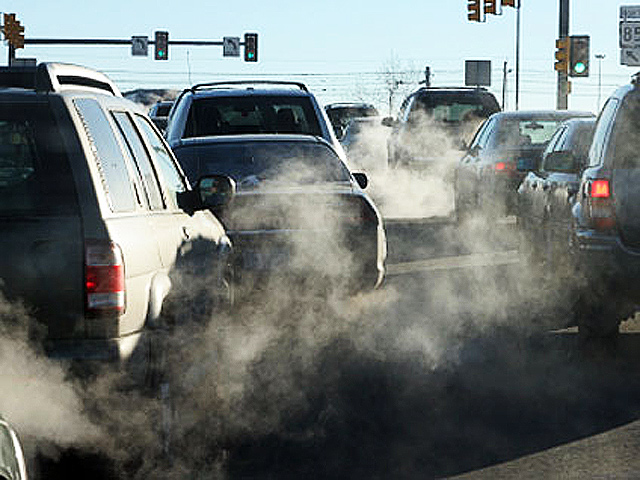 (CBS News) Two hours of exposure to peak levels of ozone -- that one might find in a major urban city -- can cause inflammation and other changes in the body known to cause to heart attacks and sudden death, according to new research.

The study, published online on June 25 in Circulation, shows that when healthy young people were exposed to high levels of ozone for two hours, they showed increases in compounds that indicate the kind of inflammation that plays major role in heart disease. There was also an observed decrease in proteins that can dissolve blood clots that may form along artery walls and observable changes in heart rhythm.

The World Health Organization estimates 2 million people around the world will die because of continued exposure to air pollution, according to the researchers. In the U.S., the EPA attributes about 40,000 to 50,000 deaths to this problem. According to the EPA, while ozone is typically found in the upper regions of the atmosphere and protects the earth from the sun's harmful rays, ozone that is found in the ground level - called troposheric -- is caused by smog. The substance is created by the mix of nitrogen oxides and volatile organic compounds, and can be spurred on by hot sunny days in urban environments and travel to other areas via the wind.

Before the Circulation research, no study had shown the effects of ozone on healthy individual's heart functions. But, now that a link between inflammation and ozone has been "causally linked" it may inspire more scientists to look into the issue, Devin told ScienceNews.org.

Heart attacks and strokes are often caused by fatty plaque deposits that collect along the inside walls of arteries, Dr. Tracy Stevens, a cardiologist at St. Luke's Mid America Heart Institute and a spokesperson with the American Heart Association, explained to ScienceNews.org. When the plaque is inflamed by various agents it can swell to the point of bursting. If it explodes, the body sees it like a cut and creates a clot. Stevens likened the process to a pimple filling with pus, exploding and then scabbing over. However, when it comes to the heart, these scabs can stop blood flow and create heart attacks or strokes.

For the study, 23 subjects between the ages of 19 to 33 were exposed to both clean air and 0.3 parts per million of ozone. For comparison, the EPA's eight hour ozone standard - or the level of ozone that would be observed in an average American city - is 0.076 ppm. Being exposed to the higher level for two hours is about what a normal person would be exposed to for eight hours in a typical U.S. area, according to Devlin. The subjects were placed in both a clean air and ozone-laden environment at least two weeks apart. During their exposure, they cycled and rested in 15-minute periods.

No one complained of any physical symptoms after being in the ozone scenario, but their lab results showed otherwise. The participants had a 99 percent increase of  an inflammatory marker interleukin-8, and a 21.4 percent decrease in plasminogen activator inhibitor 1, a protein that can break up blood clots. A 51.3 percent decrease in the time between heart beats -- also known as the heart rate variability - was also noticed. Also, a 1.2 percent increase of QT, or time it takes from the start of the Q wave to the end of the T wave in the heart's electrical cycle, was observed.

Luckily, the results were not permanent and after 24 hours, the participants' levels returned to almost normal. But some changes in interrluekin1-beta, another indicator of inflammation, and plasminogen activator inhibitor 1 were still seen a day after the exposure.

"The results complement what are suspicions are, and help us to apply what we know about pollution risk to populations we think are at especially high risk," Stevens told TIME.

Devin says that in order to change federal health-pollution standards, evidence - like this study - have to show the effects of pollutants.

"You really need to know that there is a true causal link between this pollutant and a health effect," he told ScienceNews.org. "And that's what makes the new study so remarkable."