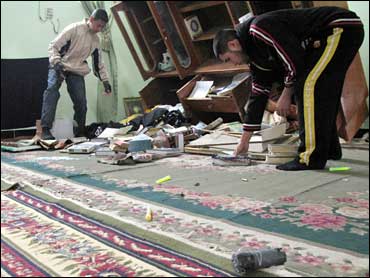 A U.S. Army helicopter made a "hard landing" in northern Iraq on Thursday, but the military said the problem was mechanical and not the result of hostile fire.

Two pilots were injured and evacuated to an American military hospital in Kirkuk, about 180 miles north of Baghdad, the military said in a statement. There was no word on the extent of the pilots' injuries.

The helicopter, an OH-58 Kiowa, is mostly used in surveillance and some light combat missions.

"Preliminary reporting shows the cause of the hard landing was mechanical and not hostile fire," the statement said.

Last week, ground fire forced a Black Hawk helicopter to make an emergency landing north of Baghdad, the military said. At least eight other U.S. helicopters have crashed or been brought down by hostile fire in Iraq this year.

The military also announced the killing Wednesday of a U.S. Marine in the western Anbar province, a hotbed of the Sunni insurgency. The Marine's name was withheld pending family notification.

The death brought to 79 the total number of Americans killed in Iraq in February. At least 3,163 members of the U.S. military have died since the beginning of the Iraq war in March 2003, according to an Associated Press count. The figure includes seven military civilians. At least 2,546 died as a result of hostile action, according to the military's numbers.

Baghdad appeared quieter Thursday, with only one person killed in a roadside bomb, police said. The lull came a day after a car bomb ripped through a bustling shopping district in western Baghdad, killing at least 10 people and wounding about 20.

A U.S. military spokesman condemned the bombing as "ruthless" and "barbaric" but said overall violence was down, three weeks into a joint U.S.-Iraqi security crackdown.

"Although we've seen some initial progress, we know our enemies will continue to attempt to disrupt our efforts, and that improving security in Iraq will take time," Rear Adm. Mark Fox told reporters Wednesday.