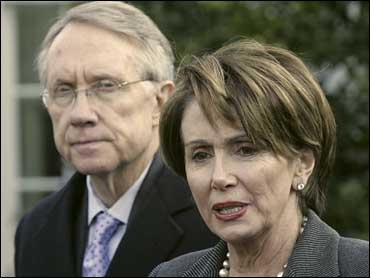 Just hours after floating the idea of cutting $20 billion from President Bush's $142 billion request for military operations in Iraq and Afghanistan next year, Senate Budget Committee Chairman Kent Conrad was overruled by fellow Democrats on Thursday.

"It's nothing that any of us are considering," Senate Majority Leader Harry Reid, D-Nev., told reporters.

Conrad's trial balloon to cut war funding would have affected the budget year beginning Oct. 1 and was separate from the ongoing debate over Mr. Bush's $100 billion request for immediate supplemental funding for Iraq and Afghanistan.

Even the Pentagon acknowledges that its $142 billion 2008 war funding request is simply a best guess of Iraq and Afghanistan costs, and Conrad's proposal didn't earn rebukes from Budget Committee Republicans.

But the speed with which it was rejected by his colleagues seemed to reflect Democrats' sensitivity to any accusations of giving short-shrift treatment to funding for troops in battle.

"Our caucus feels strongly that we should go with the president's numbers" on 2008 war costs, Conrad said. He spoke just hours after floating the idea of curbing Mr. Bush's request for next year's war budget.

The North Dakota Democrat said he was simply seeking to come up with the most accurate figures possible for war costs as he develops a Democratic budget blueprint for the fiscal year beginning Oct. 1. The $20 billion cut was based on Congressional Budget Office estimates — instead of the administration's February budget request — of Iraq and Afghanistan war costs.

CBO issued an estimate last month that forecasts 2008 costs of $120 billion for Pentagon operations in Iraq and Afghanistan and military aid for the armies of those two countries. The estimates would drop to $75 billion in 2009 and to $40 billion in 2010.

The CBO scenario assumes the number of troops deployed in Iraq and Afghanistan are reduced to 30,000 by 2010.

Even before restoring the proposed cut for 2008, Conrad's budget plan assumed $85 billion more in war funds than Mr. Bush requested. That's because Conrad included money for a continued troop presence over 2010-2012.

"We are going to provide actually more funding, because we think the president's budget has understated the war costs over the five-year period," Conrad had said at the time he broached the idea of slashing $20 billion from the budget request.

Conrad added that the congressional budget resolution he is drafting for debate later this month will provide Mr. Bush's request for a $49 billion boost — to $481 billion — in the core Pentagon budget.

The annual congressional budget blueprint sets guidelines but is not binding, and the actual war budget will be set under a fiscal 2008 defense spending bill that will advance later this year.

Deputy Secretary of Defense Gordon England told the budget panel that the administration's $142 billion 2008 war request is the Pentagon's best estimate but that it "could go up or down" depending on how well the war goes.

The nearly four-year-old war in Iraq has thus far been financed primarily through emergency spending bills, amid growing criticism from lawmakers who say it should be part of the long-term budget. Last month's budget submission represented the first time the Bush administration offered a detailed war funding request so far in advance.

A separate issue is the looming $100 billion Iraq and Afghanistan funding bill, which continues to roil Capitol Hill.

Democrats are deeply divided over their Iraq strategy, but leaders such as House Speaker Nancy Pelosi, D-Calif., want the war funding bill to require that any troops deployed in Iraq be properly trained, equipped and rested.

The conditions could be waived, under their most recent plan, but President Bush would have to do so himself — and report to Congress each time.

"We will fight every effort that the Democrats attempt to put handcuffs on the president to stymie his ability to wage this war in Iraq and to win it," Boehner said.

The comments marked something of a role revision for Republicans, who have savaged Democrats for proposing conditions on the Iraq spending measure, saying they were trying to cut off funding for the troops.