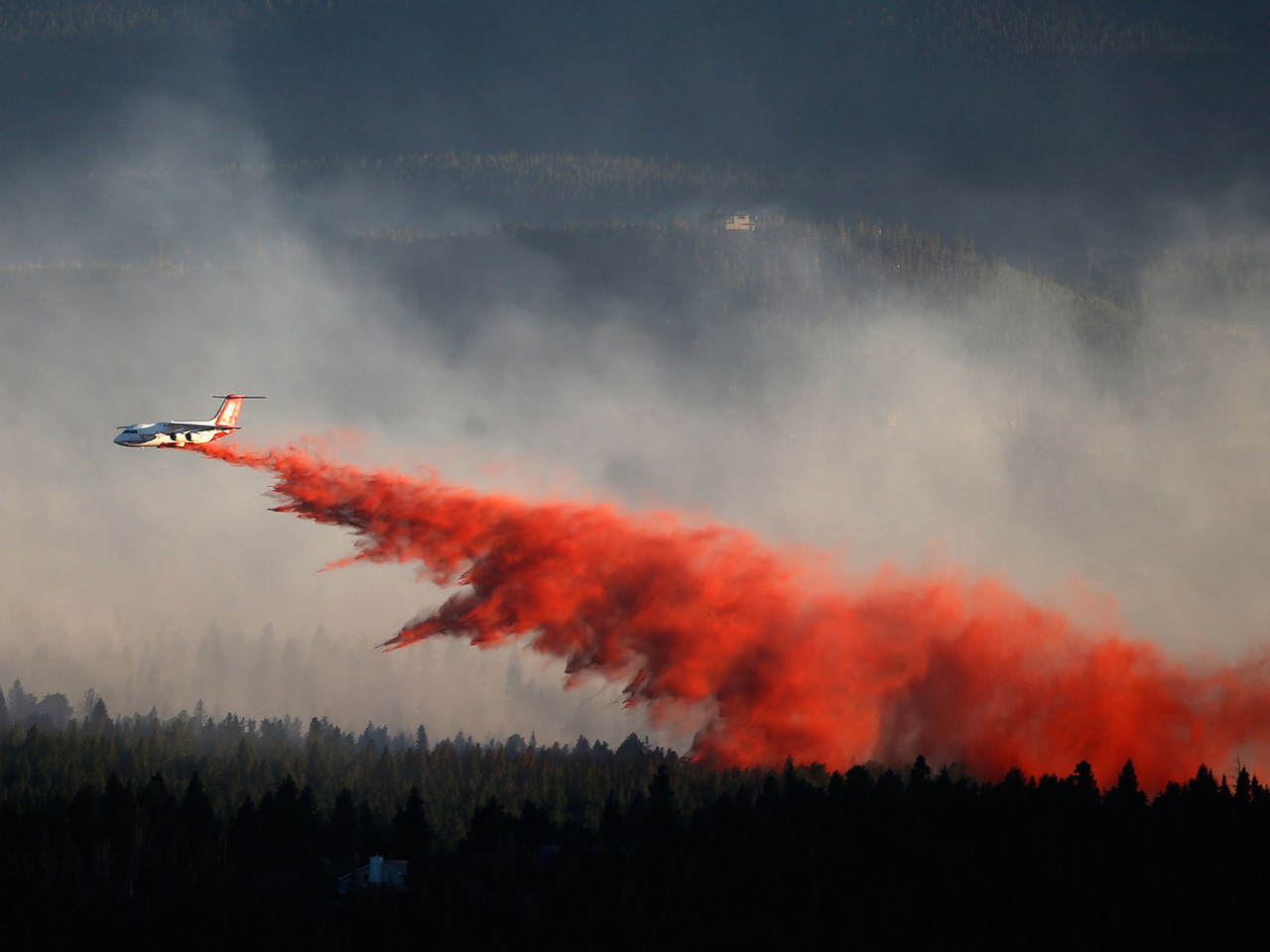 Two federal firefighters returning from a wildfire patrol in remote northern Nevada have been killed in a crash, while crews are battling blazes across the Western U.S.

Federal fire managers on Monday reported active fires in at least nine states. Here's a look at some of them:

A vehicle carrying Bureau of Land Management firefighters heading back from looking for lightning-sparked wildfires crashed, killing two of them and injuring another on a Nevada highway near the Oregon state line.

A firefighting truck overturned Sunday evening on U.S. 95, BLM spokesman Stephen Clutter said Monday. Their names and other details of the crash on State Route 140 weren't immediately made public.

The injured firefighter was flown by helicopter to a Reno hospital, Clutter said.

A BLM statement mourns the deaths and injury and says the agency's thoughts and prayers are with the firefighters' families.

Two campers accused of igniting a Colorado wildfire that has forced the evacuation of 2,000 people talked to a reporter about the blaze before they were arrested.

Suggs and Kuykendall were arrested Sunday at an evacuation shelter. The pair and a woman camping with them told the Daily Camera newspaper of Boulder that they saw the fire soon after it started.

They had "never seen anything like it," Suggs said.

The fire has burned about a square mile in the foothills roughly 20 miles west of Boulder and has destroyed three homes.

In northern Colorado, firefighters say a wildfire near the Wyoming border has burned another 1,000 acres, and they are warning that the fire could spread rapidly on Sunday because high winds are forecast.

Crews spotted an unauthorized drone over a southern Utah wildfire for the fifth time since it ignited nearly a month ago, stirring fears that firefighting aircraft could be at risk of a collision.

Firefighters will still use their airplanes and helicopters but face random, illegal drone flights as one more hazard, said Megan Saylors, spokeswoman for a team of agencies fighting the 3.6-square-mile fire about 300 miles south of Salt Lake City.

Saylors said aircraft are critical in the battle against the flames burning on a steep ridge above the town of Pine Valley because access for crews on the ground is limited.

No aircraft were flying Sunday night during the latest drone sighting, but firefighters had to ground their planes for several hours Friday night during another drone flight, Saylors said. It's unclear if the same unmanned aircraft has been flying over the fire in all five incidents over the past month.

Crews bracing for another round of dry winds are dousing hot spots as they continue to build containment lines around a smoky fire that forced weekend evacuations in the Santa Clarita Valley north of Los Angeles.

Officials said late Sunday that the blaze in the foothills of the Santa Susana Mountains was 65 percent contained after consuming about 1.7 square miles of thick chaparral.

The fire sparked Saturday prompted the South Coast Air Quality Management District to issue a smoke advisory through Monday for portions of the valley because of potentially unhealthy air.

About 2,000 people sent fleeing from homes in the Stevenson Ranch area were allowed to return Saturday night. Aerial photos showed the flames came to the property line of a ridgetop home that was covered in fire retardant. The cause is under investigation.

In the last two months, nearly 100,000 acres have burned in California in as many as nine separate fires at once. The Erskine fire near Lake Isabella killed two people and destroyed more than 280 homes.

Los Angeles county fire chief Darly Osby said this is the most volatile fire season in over 100 years.

"Even though some of the fuels appear to be green there is five years of dead growth underneath those fuels and there is a potential for a catastrophic fire," he said.