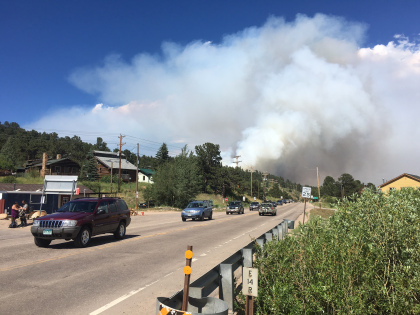 NEDERLAND, Colo. - Two Alabama men have been arrested for their alleged role in starting the Cold Springs Fire near Nederland in Colorado, CBS Denver reported.

According to the Boulder County Sheriff's Office, Jimmy Andrew Suggs, 28, and Zackary Ryan Kuykendall, 26, both of Vinemont, Alabama, have been charged with fourth-degree arson.

"The men face a felony arson charge because lives were endangered as a result of the fire," the sheriff's office said in a statement.

Fire investigators and sheriff's detectives said they were able to determine the origin of the fire was an ad hoc campsite near the Peak-to-Peak Highway and Cold Springs Road.

Three homes and three buildings have been destroyed by the wildfire still burning north of Nederland, with 30 more homes in the path of the fire.

About 2,00 people have been forced from their homes, and authorities are warning that shifting high winds and high temperatures on Sunday could put more homes in danger. The fire that started on Saturday spread quickly, and it scorched 600 acres as it moved to the northeast, with no containment.

Power was knocked out to some of the homes in the surrounding area.

"The land survey resulted in identifying three homes that are destroyed. These homes each included one outbuilding each that was also destroyed for a total of six destroyed structures," the Boulder County Sheriff's Office said in a statement. "This is an active fire with fire crews still working in the area. The area is still a mandatory evacuation zone and residents should not be inside the zone."

Currently, there are 52 additional structures within the fire perimeter, of those structures, 30 are identified as homes, the sheriff's office said. At this time, there are no identified homes in the immediate path of the fire, but shifting winds and high temperatures could potentially put more homes in danger.

Boulder County Sheriff Joe Pelle said evacuations won't be lifted because of the weather forecast, with hot weather and high winds making it too dangerous.

"It's our hope and desire and prayer that the winds will stay down and we'll be able to contain this within the boundaries of Ridge Road and Cold Springs Road and to keep it from going out of those boundaries. A lot of it right know depends on the weather," Pelle said.

All residents east of Peak to Peak Highway along the north and west sides of Ridge Road were evacuated. New evacuation orders were issued Sunday afternoon for south and southeast of Barker Reservoir off Boulder Canyon Road. Additional evacuations have been ordered for areas around Boulder Canyon west of Magnolia and Sugarloaf roads south and southeast of Barker Reservoir through Aspen Meadows.

Officials said about 200 firefighters were on the ground and 12 aircraft are fighting the fire from above, with more help on the way.

A fire ban is now in effect for all of unincorporated Boulder County.

In northern Colorado, firefighters say a wildfire near the Wyoming border has burned another 1,000 acres, and they are warning that the fire could spread rapidly on Sunday because high winds are forecast.

An evacuation order was issued for Parsons Draw landowners on Saturday. That fire started on June 19 and now covers more than 15,000 acres. Containment is estimated at 5 percent and the fire is expected to burn into October.