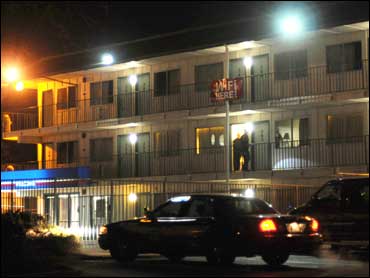 A man suspected of shooting two Indiana police officers in an ambush has been found dead in Louisville, Ky., of a self-inflicted gunshot after an all-day standoff.

Louisville Metro Police spokesman Robert Biven said the suspect was pronounced dead at the scene 8:45 p.m. Friday after he shot himself. That's about the same time police deployed gas inside a house where he had been barricaded in a standoff since the morning.

Biven would not identify the dead man, but police had earlier said the suspect in the house was Robert Datillo, 37, of Jeffersonville, Ind.

The two other suspects in the shootings were arrested earlier Friday, while the officers lay wounded in a hospital.

Vincent Windell Jr., 22, was arrested in New Albany and Kyle Bieber, 19, was arrested in neighboring Clarksville, according to Jeffersonville police Detective Todd Hollis. He said the two men acknowledged being in the motel room where the shots were fired Thursday evening, hitting Jeffersonville Cpl. Dan Lawhorn and Patrolman Keith Broady.

No charges had been filed against Windell and Bieber as of Friday afternoon, Hollis said.

Indiana State Police Sgt. Jerry Goodin said the officers were shot at the door of a room at a Motel 6 off Interstate 65 after going there to investigate reports of illegal drug activity. Drugs and two pipe bombs were later found in the room, police said.

The weapon in the shooting has not been recovered. Hollis said police found illegal explosives, a box for a .45 handgun, the same caliber fired at the officers, and ammunition for several styles of rifles and shotguns in the apartment where Bieber was arrested.

Hollis said investigators were still seeking a motive for the ambush. He said at least seven shots were fired at the officers and that Broady fired two in return. Neither Windell nor Bieber was hit.

Broady, 32, was shot once near the shoulder in an area not protected by his bulletproof vest, while Lawhorn, 39, was shot twice in the hip, Hollis said.

Both were in stable condition Friday after undergoing surgery.

"Due to the seriousness of their injuries, the internal injuries on both, we just hope and pray that they are going to recover," Hollis said.

Lawhorn has been on the force for 11 years, while Broady has been a member for 4½ years and has two brothers in law enforcement.

Jeffersonville Mayor Tom Galligan, who was among nearly 100 people who visited the hospital late Thursday and early Friday, said he expected the officers to recover.

"They've still got a hill to climb," he said. "They're tough young men and they'll be fine."

The shooting had similarities to a June 2007 incident in nearby Georgetown. In that case, Floyd County sheriff's Deputy Frank Denzinger died when he and his partner were ambushed by a 15-year-old boy while responding to a domestic disturbance. Denzinger's partner survived his injuries. The boy later killed himself.

Denzinger's widow was among those who visited the hospital after Thursday's shooting.