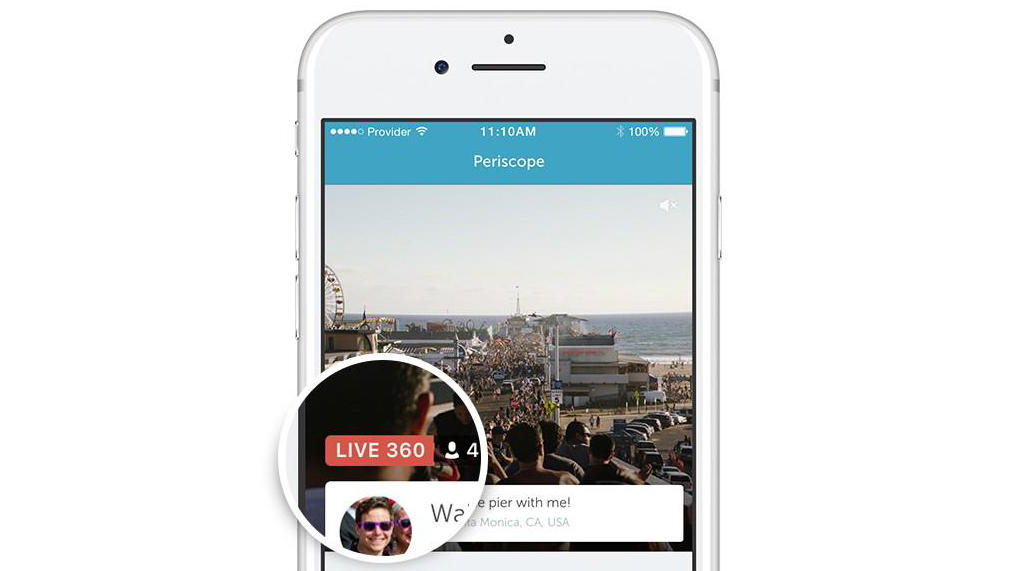 Live, 360-degree videos — which allow you to explore the video scene from all angles by moving your phone or scrolling on your laptop’s keyboard touchpad — will be available for anyone to view, though only certain popular accounts will be able to create them for now. The ability to post live 360 video will be opened up to more users down the line, according to a blog post from Alessandro Sabatelli, Twitter’s director of AR and VR [augmented reality and virtual reality].

How will you know what content has 360 video? When you see a Periscope video marked with a “LIVE 360” badge, that’s the sign that you will be able to scroll around to get a 360-degree vantage point.

The first of these videos — with the hashtag #Periscope360 — was posted by popular social media broadcaster Alex Pettit, whose Periscope streams attract more than 100,000 followers on average. His first-ever live 360 video, showing a sunset in Florida, attracted more than 170,000 viewers on Periscope as of publication.

Pettit wrote to CBS News in a Twitter direct message that being asked to launch the first #Periscope360 video was “a huge honour” but was somewhat “nerve-wracking.”

“I joined Periscope the day it was released back in March 2015 and have been creating content on the platform ever since,” he wrote. “I’ve probably done a couple of thousand live broadcast by now, but this one was definitely a highlight! 360 opens a whole new world for live broadcasting! I’m excited to use it more in the future.”

So, how will this video feature enhance the Twitter and Periscope experience for both creators and audiences? Pettit suggested that while 360 video on its own is “incredibly immersive for a viewer,” Periscope takes the technology “a step further” by making it “live and interactive.”

“I think this is as close to teleportation as we could image for now. It’s a brilliant tool and I can’t wait to experiment more with it. I think for travel and adventure broadcasters it’s going to open up a whole new world of possibilities, but also for the every day person too! Imagine not being able to make a friends wedding, but being able to be there virtually via Periscope 360,” he wrote. “I think over time, as the technology improves, we’ll see live 360 really making it mark.”

In a blog post, Periscope wrote that this feature will be introduced to more users gradually over the next few weeks. Users hoping to jump on the 360 video train can ask to join Periscope’s wait list to create their own immersive content.