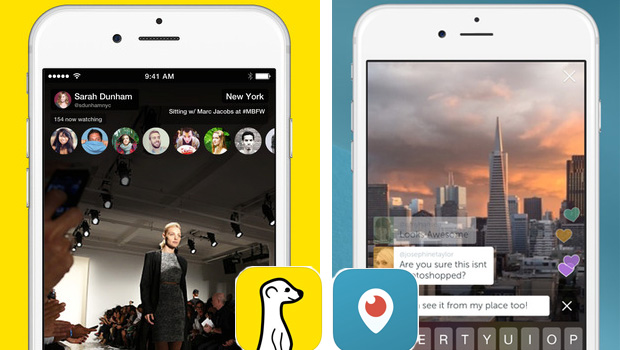 Download Periscope, Twitter's just-launched live video-streaming app, and you'll find people broadcasting all sorts of mundane stuff: waiting for AT&T to fix their wiring, getting out of bed in Silicon Valley, looking outside their office window in Chicago.

Watch the videos, and you might ask yourself, is this really the next big thing?

It could be. Check back in a few months, and you'll likely see much more enticing content. After all, the first tweet, sent by co-founder Jack Dorsey in 2006, simply said "just setting up my twttr." Now nearly 300 million people tweet photos and messages every month for work, play and social commentary.

Twitter bought the company behind Periscope earlier this year for a reported $100 million. The launch comes in the heels of rival Meerkat's breakout at the South By Southwest Interactive tech gathering in Texas. The simple app allows people to live stream anything at the touch of a button and dominated conversations at the festival. The app used to let users automatically tweet live streams too, but since buying Periscope, Twitter limited Meerkat's access.

Here are a few things to know about the emerging trend of live video streaming.

Meerkat and Periscope are not the first live-streaming apps by any means. But they are emerging as more people are shooting video with smartphones and sharing their experiences on Facebook, Twitter, Snapchat, Instagram and a slew of other platforms. And when it comes to business marketing, smaller, emerging services might be more effective than getting lost in the shuffle on big social networks, according to Forrester Research.

"Marketers who prioritize investments in Facebook and Twitter's over-fished waters are missing a big opportunity to engage with customers on smaller social networks with emerging platforms like video," Forrester's James McQuivey and Julie Ask recently wrote.

The law will have to catch up with the technology, said CBS News legal analyst Rikki Klieman.

By and large, if you are in public, whatever you do is fair game for someone else to capture and stream live to potentially millions of people via Meerkat or Periscope.

Meerkat was one of the big surprise hits of SXSW earlier this month. The app initially let users automatically tweet live streams to their followers, but that came to a halt after Twitter acquired Periscope and limited Meerkat's access to its service. While the two have many similarities, the automatic linking with Twitter followers gives Periscope a big leg up.

Other differences: Meerkat streams are public-only and live-only. Periscope lets users limit who can see their broadcasts and offers viewers the opportunity to send heart icons to streamers, akin to Facebook's "Like" button. Video streams also can be saved to replay later.

Remember when sharing a photo of your breakfast seemed like a crazy thing no one would ever want to do? It wasn't that long ago. Live streams might seem equally crazy now, only to become second-nature in just a few months. From news broadcasts to travel adventures and birthday parties and weddings shown to far-away relatives, the possibilities are all there. All you need is a Twitter account and a solid Internet connection on your smartphone.

Like any new technology, it may take time for apps like these to find their niche. When a massive fire erupted Thursday in New York City's East Village neighborhood, Ben Popper, a writer for The Verge, said that he got a push notification from Periscope that a user was live streaming from the scene - well before news crews arrived. He got less information than we would have gotten from a formal newscast, he said, but he got it faster.

"As Meerkat and Periscope connect live video to the real time distribution network of Twitter, some uncharted new forms of media creation and consumption are going to emerge," Popper wrote. "We've had live-streaming apps before, and seen civilian coverage of events like Occupy Wall Street and Ferguson, but this new generation of apps is about to reach a much big audience at a much faster pace."

He added that there was also a chat between viewers under the feed he was watching, and that since Periscope lets users post emoji replies, "a disconcerting stream of colored hearts were juxtaposed against the fire and smoke."

For companies, there's major potential for advertising and a way for brands to connect directly with customers.